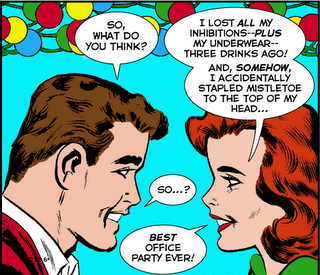 Sure, lots of people are cutting back and not throwing extravagant bashes for Christmas this year, but almost every company is going to have some sort of Holiday Party.

Here are some rules to get you through yours and not get you fired.

The thing about the holiday party is that it is in a tricky middle-ground where you're supposed to hang out with your co-workers, let loose, and have fun but you can't have too much fun or people are going to be whispering about you behind your back. You have to keep that balance. Here are some strategies for getting along with everyone and maybe even making you a shining star of the office.

I know you don't want to hear this, especially if there is an open bar at your holiday party, but this is really just smart for everyone. Face it, you're not a co-ed at Mardi Gras, and you don't have the tolerance of when you were. Also, showing your tits is not appropriate for the person you have to show your annual review. It's just not. When you start drinking bad things start happening, so just have a couple of cocktails to loosen up and then switch to cranberry and soda (no vodka). Everyone will think you're tossing them back so there won't be any peer pressure, but you'll keep a lid on your bad behaviour.

Show Up to Work the Next Day

Let's say you don't listen to me (how dare you!) and you get drunk at the party, and let's say your company is stupid enough to have their party in the middle of the week. If those two things happen, you have to go to work the next day. If you don't, everyone will know why and they will sit around and talk about your bad behaviour the night before twice as much. If you're there, they have to sneak around and do it behind your back, which will cut down on the office gossip by at least 50 per cent. You're already in trouble, don't make it worse.

Since you're on alcohol restriction, you have to do something to overindulge. Go for the food. Hopefully you work somewhere with enough taste and class to order up a bunch of good appetisers or a buffet or something. Go to town on the catering. Eat like a Biggest Loser contestant the day before filming starts. Load up that plate and go back for seconds. You earned this, and you're going to start working it off in January anyway. And yes, hit that cookie plate. Hit it hard. Just save me one of those peanut butter cookies with the Hersey Kiss in the middle.

No, don't bust out the hideous Christmas sweater like your Aunt Denise, but wear something nice and festive. Not festive in a holiday way, but like you're going to a nice, fancy party, which hopefully you are. Make it look like you put a little bit more effort in than you do on the normal day. People like that. And pull the rack out a little bit; it will help with some of the later tips, like making nice with your boss' husband and winning you a sexual harassment lawsuit. You're welcome.

The holiday party is not the time to indulge in your office crush by getting him or her drunk and taking advantage. This is a big no-no. Not because I'm against shitting where you eat (which I am, but that's a whole different article) but what is more cliché than getting wasted and doing something dirty with someone you work with in the bathroom of the party. That is so sad. That is like Cathy cartoon sad. Don't be that guy, and don't be that girl. Just wait for the company picnic this summer, then fuck your brains out. That's what classy people do.

Since you're staying sober(ish) and keeping your hands to yourself, what should you do to pass the time? Document everyone who isn't following this advice and making a complete jackass out of themselves. If it's just a mildly annoying picture, post it on Facebook and tag them. If it's really incriminating, you know what to do with it. Congratulations on your promotion and/or sexual harassment lawsuit settlement.

Just because you have to suffer through a night of office torture does not mean one of your friends or loved ones needs to as well. Sure there might be fancy food and an open bar, but if your +1 doesn't behave themselves and ends up puking and pooping on themselves in the bathroom, that's going to reflect negatively on you. And why would they want to come? They don't know anyone, they don't care about your office in-jokes and gossip, and they certainly aren't going to further their own career (unless it's at your expense). If people expect your spouse to come, just say, "Oh it's her office party tonight too." Instant excuse! Trust me, she'll thank you for it anyway.

Not everyone is smart enough to take my advice (how dare they!) so if all of your co-workers bring their spouses, then it's time for you to get to work. Here is the secret to working an office party: don't go and brown nose your boss, get friendly with his or her spouse. Putting your nose halfway up your boss' ass is so transparent that everyone is going to see what you're doing. But if you talk to his or her significant other, then you're just being a good sport. Your boss already knows all about your personality and your strengths and weaknesses, but if his wife is telling him the whole way home how charming and sweet and smart and funny you are, you're going to rise in his estimation. Or he's going to think you’re having an affair with her and throw you out on the curb.

If your office makes you draw names and buy a gift for someone or put a gift into a pool that everyone picks from, be sure to go over the limit. I'm not talking about buying a $100 watch when $5 is the agreed amount, but just go slightly over. If it's supposed to be $15, spend $20. If it's supposed to be $25, go $35. Just make sure that yours is the nicest and most sought after gift. No one wants to be labelled the cheap jerk who put some already-scratched lottery tickets in the White Elephant. Make sure everyone knows that you have great taste and money to burn. The halo will glow after you all year.

If you really want to get ahead at the office, people need to think you have a life outside of it. Talk to people about their hobbies and interests. Ask people where their kids are going to school and how their parents are doing after that operation. You don't even really have to listen, but just let people ramble on and on about themselves for a bit. They'll think you're cool. They'll think you're a friend. Then when it comes time to fire someone, they'll axe some jerk who never asked about their kids. That's how you stay employed, by being shrewder and more congenial than the rest.

What's the difference between a weasel and a fund manager?

Arrests after nasty find in meat

1 Response to "10 tips to survive your Xmas office party"

<p>The no kissing thing goes pretty hand in hand with the whole not drinking too much thing.&nbsp;</p>