Accusations of child witchcraft on the rise in Africa 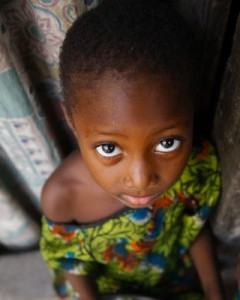 The United Nations Children's Fund (UNICEF) says an increasing number of children in West and Central Africa are being accused of practicing witchcraft.

The UN agency says such accusations often lead to physical abuse and the abandonment of vulnerable children.

Gary Foxcroft, has met many children who have been accused of witchcraft in the Niger Delta region. Foxcroft is the founder of Stepping Stones Nigeria, a non-profit humanitarian organisation based in the UK.

From the organistion's headquarters, he looks at a photo of two young girls and recalls their case. The sisters, Helen and Victoria, were three and five years old, respectively, when first brought to the attention of Stepping Stones.

"They were very young girls, and they'd both been accused of witchcraft and thrown out of their home by the father, and they were living basically in   bush land for months before anyone found them," he said. "They were just surviving by eating berries and drinking rainwater. Nobody would talk to them in the community, no one would touch them, no one would go anywhere near them because they were just utterly petrified that these children were going to contaminate them or sort of posses them with their evil spirits."

According to a recent report released by the United Nations Children's Fund, accusations of child witchcraft are on the rise in West and Central Africa.

Aleksandra Cimpric has been researching violence associated with witchcraft accusations in Central African Republic for more than four years. She says that in the past accusations of witchcraft usually focused on women and the elderly.

"When I arrived for the first time in 2005, there were no accusations of children," she said. "And then in 2006 and 2007, we had several cases of children accused of witchcraft."

UNICEF's Regional Child Protection Adviser for West and Central Africa, Joachim Theis, said the report cited one study that estimates there are more than 20,000 children in Kinshasa, capital of the Democratic Republic of Congo, who have been accused of witchcraft and forced to live in the streets. The country has long been plagued by violent conflict. Theis says these events can cause witchcraft accusations.

"Looking at the reasons for these accusations, it's mostly against vulnerable children and it's often in societies in crisis - financial, economic crisis, conflict, HIV and aids, migration, urbanisation-so a whole range of different pressures on the societies," said Theis.

Foxcroft adds that vulnerable children are often pressured to admit to practicing witchcraft.

"Lots of the children that we work with will have been set on fire, some will have been chained up for months on end, some have had acid poured over their heads," said Foxcroft.

According to Cimpric and Theis, some Pentecostal churches are charging fees to exorcise the children and rid them of alleged evil spirits.
"According to the reports we have, what is happening in some instances is that some of these churches see a business opportunity, and they offer services of exorcism, and they demand payments for that," they said. "It's important to not make sweeping generalisations about churches accusing children. These are really entrepreneurs, individuals who set up churches for their own personal gain."

Theis said decriminalising witchcraft, which is illegal in some Central and West African countries, is a small start to alleviating the problem.
"The response has to be quite comprehensive," said Theis. "It's sensitisation, working with church leaders, with religious leaders also with traditional practitioners and providing a comprehensive package of support for children who have been accused of witchcraft."

Foxcroft's organisation works on public campaigns and helps establish centres where abandoned children can turn for help. The two sisters in the Niger Delta, Helen and Victoria are living at a centre where they receive food and shelter. He adds they are hoping to eventually reunite them with their father.

Skulls confirm we're all from Africa