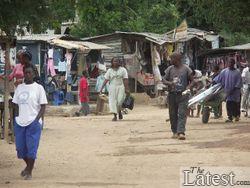 Forty-five thousand refugees are crammed into a west African slum that most people in the international community know nothing about.

And they have been abandoned by the United Nations body that put them there.

The Buduburam Camp was established in 1990 by the Ghanian Government and the United Nations High Commissioner for Refugees (UNHCR) when the civil war erupted in Liberia.

It is almost an hour's drive from the capital, Accra. Refugees are faced with severe hardship including lack of toilet facilities, pipe borne water, sheltering, sanitation and not enough food.

To serve nature is a very serious problem. The very few toilet facilities available on camp are being commercialised - we have to pay to use the bathrooms. They are not even sufficient to serve the ever increasing refugee populace. The use of these facilities are in categories: ordinary, special, VIP, and the flush type.

The amounts of 200, 300, 500, and 1000 (all are in cedis, the Ghanaian currency) are paid respectively to respond to the call of nature using either of the categories. Those who cannot afford to pay the amount mentioned above are compelled to walk 10 or 15 minutes away to the bushes come rain or shine. Cases of snake bites, resulting from such expeditions, are on the increase.


The lack of pipe borne water on camp results in trucks transporting water to us for sale. A bucket of water (8 litres) is sold for 700 cedis while pure drinking water (400 ml) is obtained at the price 300 cedis. Those who cannot afford to buy a bucket of water go without bathing for days. Sometimes water becomes scarce and the price doubles.

The sanitation condition is very bad and yet to be addressed by relevant agencies. Drains are clogged, and garbage not properly disposed of causing mosquitoes and flies to infest the place. These conditions poses a serious health hazard to the refugee community.

It is unfortunate and strange to note that refugees at the Buduburam Refugee Camp provide shelter for themselves. Refugee at present are leasing a parcel of land from their Ghanian landlord at a very high price. To lease a parcel for a single room costs 250,000 cedis. If you want to put up a two bedroom home, with a kitchen and sitting place, it would cost 1,000,000 cedis, excluding the real cost of building.

If the lease agreement expires, one is made to either turn the house over to the landlord or pay an exorbitant rental fees on a monthly basis. We have to be wary of leasing a parcel of land because of dispute between the two chiefs in and around the camp. The two opposing chiefs make claims and counter claims to control the land.

In February, 2004 there was a fight between the two chiefs. The refugees ran amok to escape the advancing supporters of the chiefs who were armed with machetes and single barrel guns. This situation poses a serious threat to the safety of the refugees.

There is no financial relief assistance programme for the refugees. One wonders how are they surviving? A bulk of the refugee populace largely survives at the altruistic whim of their relations and friends abroad. There are times when such assistance stalls for months. In this instance, the camp becomes a jungle where only the fittest survives. Prostitution and criminal activities become the last hope for others.

Considering the numerous hardships mentioned, the struggling inhabitants of the camp are compelled to question the presence of the arm of the United Nations responsible for refugees, the UNHCR.
following the Liberian election of 1997, which saw the election of former warlord Charles Taylor, who is now on trial at the Hague for crimes against humanity the UNHCR withdrew from the camp in the belief that real peace had returned to the strife torn country and the refugees would be able ot return home.

In 2003, the UNHCR resurfaced on camp by hoisting its flag for the first time since the camp was established. Most regrettably, most Liberian refugees appealed to the UNHCR to be given refugee status and be allowed to stay in Ghana. They were messed around by the Ghanian Refugee Board and the UNHCR. The Ghanaian Refugee Board put the responsibility for finding a solution on the UNHCR by telling the refugees that the UN body must play their part to find a country to host them. While the UNHCR on the other hand said the ball was in the court of the Ghanian Government, so no one knew what was happening.

It was not until the end of 2003, that both the UNHCR and the Ghanaian government conducted a joint registration to find out the exact number of refugees and log their details. This exercise raised the hope of many of the asylum seekers of them getting the long awaited refugee status. But after the exercise, there was disappointment. The UNHCR provided everyone with an identity card that stated they did not have refugee status and were not entitled to any benefits from the UNHCR. So Ghana's Liberian wretched of the earth continue to languish in limbo. Forced to suffer in appalling conditions without most people in the world knowing about their plight. I appeal to readers of The-Latest to let people know about this human tragedy so that something is done about it.

Thorn in America's Side

<p><strong><u>Chris Gaynor</u></strong></p> Here's a question? Why did former PM Tony Blair preach so much about Africa when he was in power, and now his attention has turned to the situation in the Middle East? Has he forgotten the plight of Africa's poor?