...And the bizarre conspiracy theories about its eruption 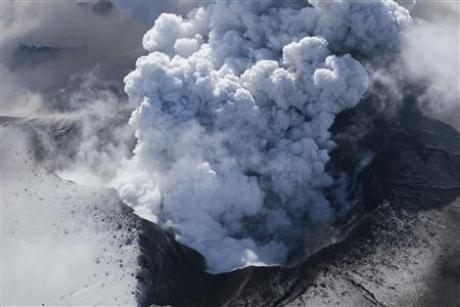 A furious eruption in Iceland has caused havoc across Europe. But is the ash cloud more than simply a natural occurrence?

At first, it was just the strange grimacing face made by the volcano, as seen in the aerial photo. This was followed by contradictory official information which consisted of a flight ban but still some flights were allowed, an ash cloud there at times and gone at others.

All this confusion has seen conspiracy theorists around the world start to wonder: Has something been hidden here? Could the eruption on Iceland even be the harbinger of the ‘end times’?

1. A meltdown of the Sun activated the volcano

Biophysicist Dieter Broers states that “NASA photographs one day before the eruption show the largest solar flare for 15 years.” He is sure that the “the Earth will trigger a super-meltdown in the Sun in 2012.”

Mysteries researcher Hartwif Husdorf said: “They directly affect the continental plates.” He alleges that the source of the weapon is the US HAARP military project in Alaska, which among other things has already produced artificial polar lights with high frequency waves.

3. Closing in on the end of the Mayan calendar

In 2012, the 5,125 years of the Mayan calendar are up in an event which many think will bring about the end of the world. Mayan expert Walter-Jörg Langbein asserts: “Perhaps we are now like previous advanced cultures: We have lived beyond our means.”

4. Manoeuvres at an alien landing site

Photographs from March show UFO sighting rings around the Icelandic volcano (on YouTube since March 30). Volcanoes are thought to be a place where aliens have their landing sites – are they preparing for a large scale operation?

Hydrobiologist and environmental journalist Edgar L. Gärtner says: “There was no ash cloud. The air space was blocked for a state of emergency exercise to prepare us for an enormous terrorist attack.”

6. The Earth is beginning to heal itself

According to the Gaia theory, the earth is a single living organism – and is now beginning to heal itself. Each day of the flight ban sees some 220,000 less tons of exhaust gases like carbon dioxide released into the atmosphere.

Nostradamus (1503-1566), the famous seer, also supposedly foresaw the disaster. Researcher Mandfred Dimde says: “The prophecy forecasts a poison cloud which hangs over the whole of Europe. It will kill two thirds of Europeans in this area.”

8. Beginning of a new super eruption

Some 215 million years ago, a supervolcano caused the death of up to 90 per cent of all living things (the Permian-Triassic extinction event). Author Maarten Keulemans states that “these are indications of the next super eruption".

9. The interior of the earth is collapsing

Since the end of the 17th century, there has been the theory that the earth is almost completely hollow and only covered by a thin crust – is our planet collapsing in on itself after 4.6 billion years?

The 13th-century ‘Edda’ describes gigantic fights between good and bad. The Eyjafjallajökull volcano is the battleground where the god Thor will start the last conflict with the giants.

Campaigners protest against BBC platform given to nazi leader

'No UK company should be profiting from Guantánamo'

Media and the Riots: representation of young people