...And what about Jamaica's fabulous golden women? 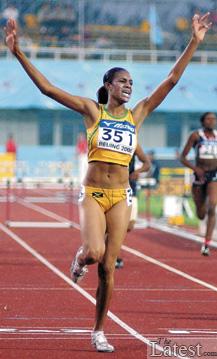 "Don't forget the outstanding performances of the Jamaican women athletes", a close relative of an international sprinter from the Caribbean island enjoying a gold rush of Olympic medals has urged. In an exclusive interview, the maternal aunt of 400m flat and hurdles runner Kaliese Spencer told The-Latest from her Montego Bay home: "The winning of gold medals in the men's 100m and 200m has been phenomenal. But let's not lose sight of the fact that our women have won two golds and two silvers and are hot favourites to win again in the sprint relays."

Patricia McIntosh, 34, added: "For me they have been the greatest success for Jamaica at the Beijing Olympics."

McIntosh, a big athletics fan, said she had been shouting so loud when she saw Jamaican victories on her television that her neighbours must have thought "I've gone mad and was killing someone".

She said there was a Carnival atmosphere on the whole of the island and prime minister Bruce Golding had pledged to call a public holiday to celebrate when the athletics team return home.

Such was the intensity of the competition for a place in the Jamaican team, world junior 400m hurdles champion Kaliese Spencer, aged 21, did not qualify for the Olympics. The event in Beijing was won by her team-mate Melaine Walker.

The 100m was a clean sweep for the Jamaicans with Shelly-Ann Fraser winning gold and Sherone Simpson and Kerron Stewart clinching joint silver. Shericka Williams also won a silver in the 400m behind Britain's Christine Ohuruogu.

McIntosh, pictured left, said she felt sorry for twice 100m world record holder Asafa Powell of Jamaica who entered the competition as a favourite to win a medal but came fifth in the short sprint, the same position he achieved at the Athens Olympics four years earlier. Powell did not compete in the 200m at either Games.

She said: "He comes from a poor family in Trelawny and I think he suffers from a self confidence problem. But, unlike Usain Bolt, who I find is very cocky, Asafa is a humble man. In Jamaica we have a saying that it is the humble calf who sucks the most milk."

McIntosh went on: "Jamaicans can be so ungrateful. When Asafa wins they raise him aloft and celebrate. But when he loses they cuss him real bad. No wonder he has a confidence problem. But I love either way."

The mother of two children said the highlight of the Olympics for her would be the women's relays when she hoped Jamaica would increase its tally of gold medals.

* Olympics boss Jacques Rogge has told Usain Bolt to show more respect for opponents after the Jamaican claimed the first sprint double for 24 years. Bolt showed off at the start and finish of his world-record breaking 200m race and slowed up yards from the line in the 100m final so he could celebrate.

"That's not the way we perceive being a champion," Rogge said. He added: "I've no problem with him doing a show. But I think he should show more respect and shake hands after the finish."

Rogge said Bolt should "not make gestures like the one he made in the 100m". He went on: "He might have interpreted that in another way, but the way it was perceived was 'catch me if you can.' You don't do that. But he'll learn. He's still a young man."

The other runners in Wednesday's 200m did not seem upset with Bolt's antics  — American silver medallist Shawn Crawford telling reporters afterwards: "I love watching him when he does his thing.

BBC Sport's Tom Fordyce has no problem with Bolt's antics. He said: "When he was introduced, he was dancing, and the crowd loves it. It adds a bit of sparkle and cheer."

Bolt told reporters he had "no regrets" about his showy 100m finish, or his antics after setting a new world best of 19.30 secs in winning the 200m. "That's just how I am," he said. "I love to dance and show people my personality. It's fun and the crowd loves it."

Bolt won by the biggest margin since the 200m came on the Olympic scene 108 years ago, beating the field by two-thirds of a second to break Michael Johnson's 12-year-old record by two hundredths of a second.

And others will also argue Bolt is simply continuing an Olympic sprinting tradition of colourful, showy champions such as Carl Lewis, Maurice Greene and Johnson, who called Bolt "Superman 2".