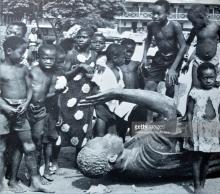 February 24 marks the 50th anniversary of the CIA-engineered coup which removed Kwame Nkrumah as President of Ghana. In Killing Hope (2003), his seminal history of the countless coups, military interventions and assassination plots organised by the US across the globe (in Eastern Europe, Africa, the Middle East and beyond) from 1945 onwards, William Blum writes: 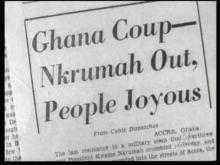 In October of the year 1965, Kwame Nkrumah, the President of Ghana, published his famous-to-be book, Neo-Colonialism: The Last Stage of Imperialism, dedicated to "the Freedom Fighters of Africa, living and dead". In the book, Nkrumah accused the CIA of being behind numerous setbacks and crises in the Third World and Eastern Europe. He later wrote that "the American government sent me a note of protest, and promptly refused Ghana $35 million of 'aid'". Four months later he was overthrown in a CIA-backed military coup.

But in the corporate media, the coup in Ghana (when Nkrumah was on a state visit to North Vietnam and China) is conveniently confined to the dustbin of history.[1] 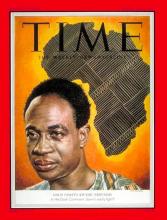 The CIA’s involvement was first recorded in the Daily Telegraph in 1972. But a much more detailed account was provided by former CIA officer John Stockwell in 1978. In his extraordinary memoir, In Search of Enemies, Stockwell spoke out against the many “secret wars” being waged by the CIA. Blum records that some intelligence sources have argued that Stockwell exaggerated the level of the CIA’s involvement in the coup. “But they considered the agency’s role to have been pivotal, and at least some officials in Washington apparently agreed, for the CIA station chief in Accra, Howard T. Bane, was quickly promoted to a senior position in the agency.” Later in 1978, the New York Times’s Seymour Hersh, citing “first hand intelligence sources” defended Stockwell's account, claiming that many CIA operatives in Africa considered the agency's involvement to have been crucial.[2]

In April 1965, there had been seven attempts to kill Nkrumah. As Paul Lee comments:

Nkrumah was keenly aware of a recent African precedent that made the notion of a US-organised or sanctioned assassination plot plausible – namely, the fate of the Congo and its first prime minister, his friend Patrice Lumumba. Nkrumah believed that the destabilisation of the Congolese government in 1960 and Lumumba’s assassination in 1961 were the work of the “invisible government of the US”, as he wrote in Neocolonialism: The Last Stage of Imperialism, later in 1965. When Lumumba’s murder was announced, Nkrumah told students at the inauguration of an ideological institute that bore his name that this brutal murder should teach them the diabolical depths of degradation to which these twin-monsters of imperialism and colonialism can descend.

National Security Council (NSC) and CIA documents released in 1999 finally confirmed US complicity in the Ghana coup. They revealed that on 27 May 1965, Robert W. Komer, a NSC staffer, briefed McGeorge Bundy, President Johnson’s special assistant for national security affairs, on the anti-Nkrumah plot (Document 253). Komer's report, moreover, established that the coup was not only interagency, sanctioned by the White House and supervised by the State Department and CIA, but also backed by America’s Western allies.[3]

Nkrumah had led Ghana (the former Gold Coast) to independence from Britain in 1957 and served as its first prime minister and president. An advocate of Pan-Africanism, and a founding member of the Organisation of African Unity, he was heavily involved in the formation in 1961 of the Non-Aligned Movement (NAM) – with Jawaharlal Nehru, Prime Minister of India, Gamal Abdel Nasser, President of Egypt, Achmed Sukarno, President of Indonesia, and Josip Broz Tito, President of Yugoslavia. As Mark Curtis comments: “The NAM committed twenty-nine states, representing over half the world’s population, to opposing imperialism and membership of any great power bloc.”

Nkrumah called himself a “scientific socialist and a Marxist” being inspired by the writings of black intellectuals such as Marcus Garvey, W. E. B. Du Bois, and George Padmore, and his relationships with them. Basil Davidson, the great historian of Africa, comments in his Black Star: A View of the Life and Times of Kwame Nkrumah (2007): “As a visionary Nkrumah was ahead of his times, with an astute understanding of colonialism that made the twin goals of socialism at home and African unity the abiding principles of his work and life.”

But Nkrumah was not without flaws: while a committed socialist he tended to rule autocratically and failed to keep Ghana from falling under the sway of the multinationals. And when he turned to the Soviet Union, China and East Germany for military and economic assistance, Washington clearly decided on his downfall.

1. Oliver Stone and Peter Kuznick even fail to mention the Ghana coup in their monumental, 750-page The Untold History of the United States, Random House, 2013

* Richard Lance Keeble is Professor of Journalism at the University of Lincoln, visiting professor at Liverpool Hope University, and author and editor of 35 books including Secret State, Silent Press: New Militarism, the Gulf and the Modern Image of Warfare (John Libbey).