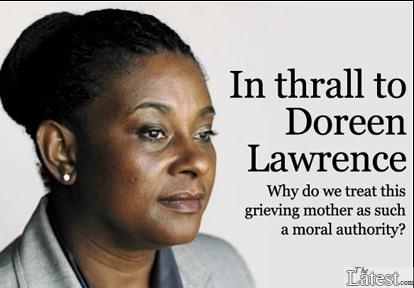 We all sympathise with Doreen Lawrence, mother of the murdered Black British teenager Stephen. But does that mean we should kowtow to her views on everything from policing to politics to race relations?

In the 10 years since the publication of the Macpherson report on the botched police investigation of Stephen's murder, Doreen has cast an extraordinary spell over British politics.

The liberal elite has promoted her to the position of a modern-day aristocrat, who sits above the political realm, passing judgement on how the police are performing or on who is fit to stand for public office.

Doreen has become an unelected spokeswoman for the Black community.

It's not going too far to say there is a Cult of Doreen Lawrence. The media treat her every utterance as wise and sacrosanct, while London-based politicians rush to be photographed alongside her.

Doreen has been transformed from tragic mother of a murdered Black man into unelected spokesperson for the whole Black community.

Last week she spoke alongside Justice Secretary Jack Straw and Metropolitan Police commissioner Sir Paul Stephenson at a conference on race relations; it was her speech, in which she said the police "rank and file are still racist", that dominated the headlines.

She's been encouraged to intervene in politics too. In the run-up to the London mayoral election of 2008, the Guardian devoted a front page splash to Lawrence's insistence that Boris Johnson, given his earlier criticisms of the Macpherson report, is "not an appropriate person to run a multicultural city like London".

"[T]here's no way he is going to get the support of any people in the black community," she declared, and of course no one questioned her Mystic Meg-style insight into what black voters intended to do.

She remains the unassailable judge-and-jury of British public life.

The Guardian failed to point out that Lawrence's organisation, the Stephen Lawrence Charitable Trust, had received at least  £1.9m in funding from then Mayor Ken Livingstone's London Development Agency. If anyone else who had received money from one mayoral candidate launched an attacked against another mayoral candidate, it would be branded a "conflict of interests". Not in Doreen's case. She remains the unassailable judge-and-jury of British public life.

Lawrence has also made pronouncements on schooling, knife crime and media representations   of Black people, and each time she has hit the headlines. Her words are presumed to have a special power; they shape media debate and prod policy-makers.

But why should we listen to Lawrence? Of course we all feel for her, but it is precisely her position as a professional victim, the grieving mother of a murdered young man, that makes her an inappropriate person to pass judgement on politics, policing and law.

Her very closeness to a tragic killing means she is too emotionally involved, too intensely shaken by knife crime and acts of racism, to be a reliable informer of public policy. Grief is not a good driver of policy-making, which must remain objective, dispassionate.

The Lawrence phenomenon, the transformation of a grieving mum into St Doreen, has not been a one-woman show: rather, hacks and politicians have frequently exploited Mrs Lawrence's understandable anger, the purity of her sentiment, in order to push their political agendas. This is an increasingly common trend nowadays; Lawrence is at the forefront of a newly created aristocracy of victimhood, where those who have suffered are accorded the moral authority to change policy and to try to transform Britain's make-up.

Sara Payne, mother of the murdered young girl Sarah, is calling for a "Sarah's Law" that would grant parents access to the sex offenders' register. Despite the concerns of experts, who say such a law would intensify fear and loathing in local communities, Mrs Payne has the ear of tabloid newspapers and leading government ministers.

Allowing grieving parents to shape the debate about racism, paedophilia or drugs is not good for Britain. It elevates anger over objectivity, and the concerns of a tragic few over how the rest of us think and feel.

It almost takes us back to archaic, tribal systems of law and politics, where individual grievance and even desires for vengeance shaped public life. We should empathise with victims, of course, but not treat them as demigods of debate. And we should challenge their cynical promotion by observers and officials who want to back up their frequently illiberal policies with the full-on, unchallengeable weight of personal grief.

Big freeze is on in the UK

1 Response to "ANOTHER VIEW"

It&#39;s a wonderful article. Very valid, timed, and unbiased perspective. This &quot;politics of victimhood&quot;, is a growing phenomenon, not only in Britain, but throughout the world. While I personally am against any kind of discrimination, be it on the basis of Race, Sex, Caste, Class, Creed, or Religion, most of which are very common here in the Indian subcontinent, still I feel that this politics of victimhood, and exploiting the psyche, on the basis of that, should not be prevalent. I was covering a seminar here in Calcutta, on &quot;Media in times of Crisis&quot;, where I met veteran journalist and columnist, M.J.Akbar. He, pointed out in his speech, that the minorities, should come out of their feeling of being a minority and being in love with victimhood. He was talking about Muslims, when he said, that he himself being a Muslim, never sufferred from what he said as the &quot;minority victim syndrome&quot; and said that he always preferred to be known as the second majority, and if neccessary fight for the rights in a constitutional way, rather than whine on the subject. He emphasised the fact, that it is more a matter of coexistence, than a matter of empowerment of either community. And as of the matter of being tilted, we all are sure, that being a party, to a matter or a debate, get&#39;s your mind clouded, and incapable of sound untilted judgement.&nbsp;