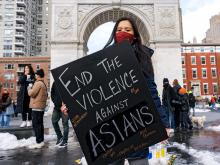 A reporting centre for anti-Asian hate crimes, released statistics showing that from March 2020 to March 2021, there were 6,603 reported incidents of anti-Asian hate in the US. That’s almost double the 3,795 documented racist incidents the year before.

The centre, a collaboration between advocacy groups and the Asian American Studies Department of San Francisco State University, emphasises that these numbers reflect only the reported attacks, and many times racism goes unrecorded. Still, the rise, largely brought about by racist rhetoric surrounding the COVID-19 pandemic, has been felt across the nation.

“My mother was ordering food at a [restaurant] when a man tried to hit her in the face,” a victim from California told the group. “She was able to avoid him, but he yelled a bunch of slurs —’Go back to China!’ and ‘Corona!’—at her before he ran out.”

Physical attacks accounted for 10.2 percent of the total hate incidents in 2020, but they've increased to 16.7 percent in 2021, according to the report, and the paper shows just how perpetual other forms of anti-Asian assault have become. In fact, 65.2 percent of the racist incidents in the past year involved name-calling and verbal harassment and 10.3 percent involved civil rights violations like refusal of service, denial or harassment while taking transportation, and workplace discrimination.

Anti-Asian racism is most frequently occurring in places of business, with nearly one-third of attacks happening inside shops and offices, the report says.

“I was discriminated against by my own bosses and co-workers, along with customers,” another person from California said. “I was being told to "go back to my country," or that I would "give them" COVID. I would even get death threats from customers, and they would tell me to kill myself and/or they would kill me.”

This week, two Asian women, 85-year-old Chui Fong and an unidentified 65-year-old, were stabbed with a military-style knife outside a San Francisco grocery store while waiting for the bus. Security camera footage shows the two women standing there when a man with a knife winds up and lunges, first at one woman and then at the other. The knife was lodged in Fong's side, and it was longer than her arm. A suspect has been arrested and identified as 43-year-old Patrick Thompson, who has a criminal history of physical assault.

New York had the second most anti-Asian hate reports over the past year, with 15.1 percent of incidents.

Just last weekend an Asian woman and her friend were walking in Manhattan when another woman snuck up on them from behind and attacked with a hammer. About 48 hours earlier in the city, two other anti-Asian attacks occurred five minutes apart- one assault involving a kid and another a woman being pushed toward the subway tracks. A week before, a 61-yeard-old Chinese man out collecting recycling for extra income was repeatedly stomped in the head, leaving him unconscious for days.

Of the respondents, nearly half were Chinese people who experienced racism. More reported forms of hate noted in the paper include vandalism, up 130 percent from last year, and online hate, which was up 82 percent over the year.

“A random person messaged me on Facebook,” said one person from Minnesota. “They used slurs against me and against my Asian husband calling him ‘an almost Black ch***’ and saying we should both be hung.”