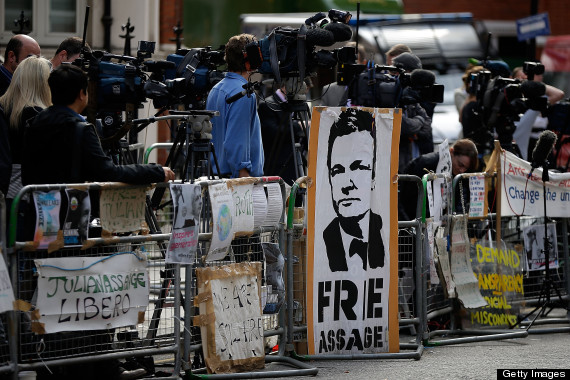 Julian Assange's supporters outside the London embassy where he is confined say he is being persecuted for speaking truth to power.

However, free speech campaigners further afield say the WikiLeaks founder has lost his way and damaged the cause.

The Australian has been seeking refuge in the Ecuadorean embassy for eight weeks to avoid extradition to Sweden where he is wanted for questioning over allegations of rape.

A dozen activists for causes ranging from internet freedom to anti-capitalism were keeping vigil outside the building on Friday, fuelled by pizzas ordered online for them by an anonymous WikiLeaks supporter in Canada.

"In my humble opinion they like to shut people up and I wouldn't be surprised if he got killed. Assange is staying away from the embassy windows and I don't blame him," said a member of the anti-finance Occupy movement who gave her name as Tammy.

"Conspiracies are often made to look like crazy theories but quite often it's all true, hidden in plain sight," she said.

Assange says Sweden would be only a stop on the way to the United States, where he says he believes authorities want to punish him for publishing thousands of US diplomatic cables on WikiLeaks in 2010 in a major embarrassment to Washington. 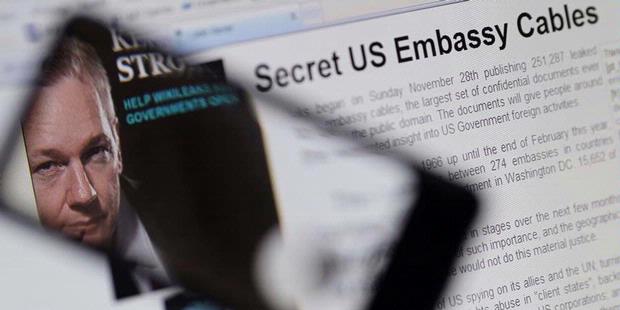 A US government source said allegations by some Assange supporters that there was a secret American indictment pending against him were wrong. The source told Reuters on Thursday that Washington had not issued any extradition request for Assange.

Ecuador granted Assange asylum on Thursday but Britain has refused to grant him safe passage to Quito because he has jumped bail and also because the government is under a legal obligation to comply with court rulings and send him to Stockholm.

Among freedom of speech groups who should be natural allies of WikiLeaks, Assange's choice of Ecuador has caused dismay.

"He's ironically going to a country that locks up journalists frequently. It's a rather grim irony," Padraig Reidy of Index on Censorship website, that in 2008 bestowed its new media prize on WikiLeaks, told news agency Reuters.

Campaign group and website the Committee to Protect Journalists ran a piece titled Ecuador not fit to champion free expression, citing harassment of newspapers and closures of radio stations.

Vaughan Smith, a loyal British supporter of Assange who hosted him at his home for a year while extradition proceedings dragged on, defended his friend's decision to turn to Quito.

"I'm certainly not going to defend Ecuador's beating up on journalists. I don't think that's defendable. But I don't think it invalidates their view that Julian is a political refugee," said Smith

"There's a risk of us being a little bit pious about all this," he said, pointing out that Britain and the US were placed 28th and 47th respectively on Reporters Without Borders' ranking of countries by levels of press freedom.

This was better than Ecuador at number 104, he acknowledged, but not good enough to lecture the rest of the world.

But Reidy felt that Assange had gradually drifted away from WikiLeaks' original agenda.

"There seems to be a real shift in WikiLeaks positioning from being purely about freedom of information into this vague, anti-imperialist, anti-American, anti-NATO kind of thing. It's become much more about this kind of vaguely anti-Western kind of sentiment, this mushy kind of politics," he said.

The description may not have pleased the Assange supporters outside the embassy. Two dozen more arrived as the day wore on and hunkered down with beers to the soundtrack of Tracy Chapman's song Talkin' Bout a Revolution.

"Assange shouldn't be grounded. You can't ground Spiderman," said Mikey Jones, 22, a systems analyst who had a grey bandana knotted to hide half his face. "This whole thing is rubbish." 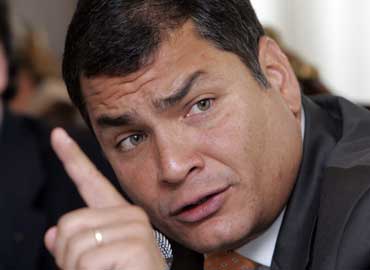 Ecuador's President Rafael Correa is part of a group of leftist South American leaders, with Venezuela's Hugo Chavez and Bolivia's Evo Morales, who often denounce what they see as US imperialism.

Ecuador first showed sympathy with Assange in November 2010 when it offered to give him residency, saying it was concerned about American activities revealed by WikiLeaks.

In April 2011, Quito expelled the US ambassador over cables published on WikiLeaks in which US diplomats alleged that the Correa government was tolerating police corruption and seeking financing from Chavez and from Colombian Marxist rebels.

In January 2012, Kremlin-sponsored English-language TV channel Russia Today said it had given Assange his own talk show. Critics of President Vladimir Putin's human rights and freedom of speech record condemned Assange for taking the job.

In May, Assange interviewed Correa on the program. The 25-minute conversation, available on YouTube, offers some insight into the rapport between the president with a tendency to muzzle the media and the campaigner for free information.

"Let's get rid of these false stereotypes depicting wicked governments persecuting saint-like and courageous journalists and news outlets. Often, Julian, it's the other way round," Correa said during the interview.

"President Correa, I agree with your market description of the media. We have seen this again and again, that big media organisations that we have worked with ... have censored our material against our agreement," Assange said in response.

He was referring to his dealings with major Western media including the New York Times and Britain's Guardian, which published material obtained by WikiLeaks in 2010 but later fell out with Assange.

That has been a pattern in Assange's collaborations with other organisations.

Index on Censorship's Reidy said he had parted company with Assange after discovering that diplomatic cables obtained by WikiLeaks that contained details of Belarusian opponents had fallen into the hands of the authoritarian government there.

"We felt Assange was careless about who had access to the information, to say the least," said Reidy.

Assange's friend Smith, himself a freelance TV journalist, said the mainstream media establishment, especially in Britain, was somewhat defensive about new competitors and that there were elements of a turf war in its relationship with Assange.

"We like the power of controlling the information. We don't really want that challenged by some Australian. I think there is an element of that. I'm not saying it's all that," he said.

"I'm not saying that all criticism of Julian Assange is misplaced, far, far from it ... but I'm afraid that in journalism there is far too little criticism about ourselves."

*Additional reporting by Mohammed Abbas in London and Mark Hosenball in Washington.

This story first appeared on Reuters.com.

Be our eyes and ears and join The-Latest