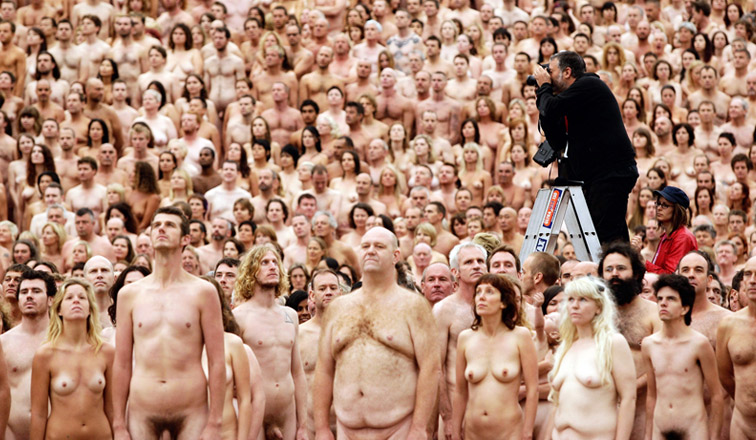 Volunteers began queuing before dawn to participate in Tunick's installation, which included a series of images shot outside as well as inside the iconic Australian landmark.

People of all ages, backgrounds, shapes and sizes posed, embraced and mugged for Tunick — best known for his distinctive photos of nude figures in public spaces.

Participants included a woman pregnant with twins who was set to be induced for labour later Monday, rugby players, doctors, teachers and even a local TV personality, who turned away from the camera to film a segment for his morning show.

"I'll never get a chance to do this again; it's not worth being inhibited," Art Rush, a 19-year-old student and participant, told reporters.

"It doesn't feel sexual, it just feels tribal, a gathering of humanity," he said. "I thought it would be all old people and nudists, but everyone here is great."

Monday's Sydney event, dubbed "Mardi Gras:The Base", was comissioned as part of the city's Gay and Lesbian Mardi Gras Festival.

"It was difficult to get the straight participants to embrace the gay participants and vice versa," Tunick said afterwards.

Tunick had also invited singer Lady Gaga, who recently professed to be a fan of his work, to participate as well, but there were no reports of the outrageous pop star at the shoot.

"So I was very happy that the last setup finally got done and everyone came together in a united, friendly kiss, a loving kiss in front of this great structure."

The Sydney installation, which organisers had initially expected to draw just 2,500 volunteers, ultimately surpassed the 4,500 that turned up for Tunick's 2001 shoot in Melbourne.

He has also photographed his installations in Mexico City, Montreal, New York and Switzerland.

Graffiti artists have their say about France's presidential hopefuls