Boosted by the big re-election vote achieved by Labour leader Jeremy Corbyn, key activists gathered at the Kuumba Imani Millennium Centre, Toxteth, in the heart of Liverpool’s Black community this week to debate the way forward in the wake of a historic victory for the left. 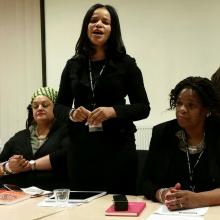 Newly-elected member of Labour’s ruling national executive Claudia Webbe, the only African-Caribbean on it, gave an impassioned speech in support of the progressive “Corbyn project”. The Islington council cabinet member said it provided a once in a generation opportunity for the Black rights, Black representation and anti-racism Corbyn had stood for all his life to be put “front and centre” of British politics.

The well-attended Advancing the Black Agenda, fighting against racism and for Black representation public meeting was deliberately organised at Toxteth – scene of a 1981 uprising by Black youth and their allies – by Momentum Black ConneXions (MBC), a newly-formed broadbased Corbyn-supporting national organisation. 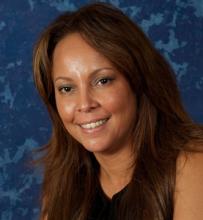 Cllr Anna Rothery, one of only two Black councillors on Liverpool city council, hosted the meeting. A member of the MBC steering committee, she helped launch Merseyside Momentum Black ConneXions, which she chairs.

The Toxteth event, held during Labour Party conference, built on MBC’s submission to the Shami Chakrabarti report on antisemitism and racism in the Labour party, at the launch of which in June MBC co-chair Marc Wadsworth clashed with right-wing MP Ruth Smeeth, who had resigned from Corbyn’s frontbench team to attack him. Wadsworth was immediately expelled from the party. But, after Labour’s general secretary Iain McNichol received a letter from his solicitors, this was changed to a suspension.

It was only after Wadsworth had challenged Smeeth about her being handed an MBC press release by a senior Daily Telegraph political reporter Kate McCann, whom unbelieveably she claimed never to have met before, he found out she was Jewish. But, determined to “weaponise antisemitism” as part of an orchestrated attempt to damage Corbyn, Smeeth put out a widely-reported statement accusing Wadsworth, a veteran anti-racist campaigner, of being anti-Jewish.

Smeeth ran to the right-wing Sun newspaper to allege thousands of people had verbally attacked her online resulting, she said, in her needing police protection. This again raised questions about her exposure by Wikileaks as a CIA "strictly protected" source.

Wadsworth said since then he had received thousands of messages of support, online and in the post, from non-Jews and Jews. 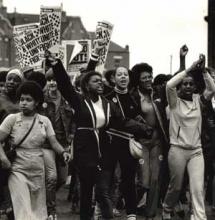 Momentum vice-chair Jackie Walker was suspended then readmitted to Labour over a comment about Jews being among the financiers of the slave trade. She insisted claims of Labour antisemitism were being "weaponised" for political ends.

Walker said there was "little if any hard evidence" of a widespread problem and the furore meant other oppressed groups including Black people had become "invisible".

She read her speech from a script on a laptop to stop the "rabidly, anxiously anti-Corbyn" media from twisting her words and said both she and Momentum's chair, Jon Lansman, were Jewish.

Walker affirmed: "All racism is abhorrent and I'm not saying antisemitism does not exist in the Labour Party. The Labour Party after all is simply a reflection of society."

"But I am saying that claims of its significance are being exaggerated for political purposes."

"And this has been done at huge cost to our movement, to our communities and to many individual people in and outside of our party."

Dealing with the Smeeth affair, she asked: “Was what Marc Wadsworth said at the launch of the Chakrabarti report antisemitic? No.” 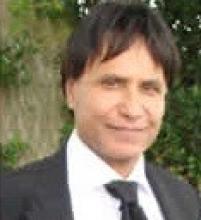 Another speaker Iqbal Sram, a former Manchester city councillor and East Cheshire Momentum member, agreed. He said: “Marc was set up. Collateral damage in the war by Labour’s desperate right-wing against Jeremy Corbyn. It’s [Wadsworth’s suspension] is a huge injustice we must all do our bit to get reversed.”

To applause, Walker said: "Antisemitism is no more special than any other form of racism. All racisms have their own characteristics and histories."

"All Holocaust denial, whether it is denial of the Jewish or African Holocaust, is a blasphemy against humanity.

"So what purpose do these allegations of antisemitism have? Why is it happening and who is paying the ultimate cost?"

"It seems to me there is little if any hard evidence that the Labour Party has a major problem with antisemitism - though there is, as Chakrabarti says [in her report], an occasionally toxic atmosphere."

"The most fundamental aim of such allegations, I suggest, is to undermine Jeremy, silence his supporters and ensure any chance of an alternative to the neo-liberal diet of cutting services and taxes that has been dished up to us as politics until Jeremy got the leadership never actually gets to our table as voters."

"Then there's the silencing of any criticism, or any potential criticism of the Israeli state, attacking and undermining anyone who supports Palestinian rights, the boycott movement, ensuring the flow of money and arms to Israel continues unabated and at whatever cost."

"This political use of accusations has not only weaponised antisemitism, it has become a weapon of political mass destruction."

"And like all nuclear options, has entailed a high degree of collateral damage, not just to the Labour movement as a whole." 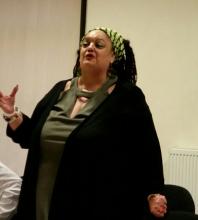 "What is extraordinary, amongst what can only be described as a tumult of accusations, is at this point, when discussions of racism in the Labour Party has the most media attention I have ever known, is that no person of colour, no group representing the interests of Black and minority ethnic people, has been heard - has been allowed to insert their perspective on this debate."

"Black people yet again have been made invisible."

Zita Holbourne, of the anti-austerity Black Activists Raising Against Cuts (BARAC UK), spoke about the importance of groups such as Black Lives Matter in harnessing the anger of the youth. She expressed disgust and despair at the state of racism in Britain. From the increased attacks on the Muslim community to Xenophobia and the migrant crisis and the government’s racist Immigration Act 2016. Holbourne handed out copies of BARAC's A Vision for Race Equality in Britain strategy paper that sought to place the issue at the heart of  Corbyn's anti austerity Labour movement.

She called for Momentum and other left-wing grassroots groups to be more inclusive and diverse by including Black voices and their experiences. A young Black woman student in the audience supported this by cautioning that Corbyn’s leadership and Momentum must avoid being the same as the white structures that had failed to deliver change for African, Caribbean and Asian people in the past.

Holbourne explained the Facebook page, United Black Labour in Support of Jeremy Corbyn, which held a fringe meeting at Momentum’s The World Transformed festival, was not a rival to MBC but a forum for discussion. 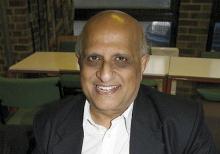 Former Labour Party Black Sections chair Narendra Makanji, who as an activist and Haringey councillor had known Corbyn for 40 years, said it was crazy that anyone could suggest the Labour leader was antisemitic or racist. He said Corbyn had opposed both evils on the streets – even being jailed overnight after being arrested at an anti-apartheid protest.

MBC unveiled its Affirmative Action and Black Agenda discussion paper, which calls on Corbyn to set up a Labour Party “affirmative action” working party to look at how disadvantaged African, Caribbean, Asian and other people of colour could be fast-tracked into jobs, education and training where they are under-represented.