Blair - should he stay or go? 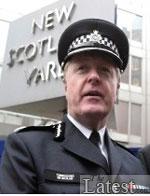 Embattled British Metropolitan Police Commissioner Sir Ian Blair appears to be a man with a mission. And not the 007 Bond type to save Queen and country from some awful villain.

Blair is fighting to save his reputation and job after his police force was found guilty of breaching health and safety laws over the shooting of innocent Brazilian Jean Charles De Menezes. The Met was fined  £175,000 and ordered to pay  £385,000 costs by an Old Bailey jury.

De Menezes was shot seven times in the head at Stockwell, south London, underground train station in July 2005 after being wrongly mistaken for a suspected terrorist. Prosecutors argued that De Menezes and members of the public were put at risk because he was allowed on two buses and an underground train while under police observation before being shot.

The pressure on Blair has intensified in the wake of the IPCC (Independent Police Complaints Commission) ruling that he attempted to prevent the investigation into the De Menezes shooting and new revelations that Scotland Yard is investigating allegations that millions of pounds in  'expenses' has gone missing. The Met's professional standards watchdog has launched a review of spending on American Express cards issued to key staff. There are claims that cash has been lavished on luxury watches, flat screen TVs and holidays. Up to  £6m is now unaccounted for, and that anti-corruption officers preparing to interview hundreds of detectives.

Blair has so far refused to resign. The-Latest had a look at the conversation around the web on this issue and invites you to share your opinion on whether Blair should remain in his post or go.

This particular part of the public is not at all split - he should go!
In fact he should have gone following the comments he made in September 2004
HG, swindon, Wilts

The trouble is that Ian Blair, like most police, is not averse to the telling the odd lie or two to protect themselves, and I doubt very much that he, Blair, did not know that they had shot the wrong person when he gave the initial press conference. I think that someone was persuaded to give him a get out by saying that they didn't brief him . I also think that if Ian Blair had any honour, and he clearly does not have any, he would have offered to resign in the hope that his offer would be declined, but instead all he has shown to us is blind arrogance . A nasty unethical person I must say.
Simon, London, UK

An innocent person was murdered, he was unlawfully killed, it doesn't matter who did it he was killed unlawfully. No one has been held responsible even though the people involved are known and blame can be proven. The recent trial only served to highlight how far the police will go to protect themselves when they are shown to be in the wrong, the false accusation that the murdered man was almost a ringer for a known suspect and the fact they tried to pass of a changed picture to prove it. The fact that some notebooks were allegedly changed to look like things happened in a certain way. Does anyone have any confidence in our police force anymore? The number of people killed in police chases yet how many police are ever prosecuted? All the while in this country we have more laws passed and more restrictions passed against us in the name of protecting us, yet for all these things the police performance never seems to improve. Heaven help us.
Fred, Warrington, Cheshire

There is clearly no real recognition of the reality of policing or the immediate threat of fanatics. What police officer or solider would want to put up his or her life on the line when all they get back is criticism and abuse. Cut away the arguments about the Middle East and US/UK politics and it boils down to people wanting to murder you and me if given the chance.

Seems that in the UK people only believe in one thing. That nobody in authority is doing their job or can be trusted. That somehow everybody in public service has got it wrong and is just plain incompetent. Perhaps the real world is more dangerous and that thousands of times a day those you condemn make the right decisions and you stay alive. But I guess that doesn't fly in the culture of blame and whinge.
Ian, Toronto, Canada

As a police officer I have served under a variety of Commissioners. Each has had to deal with major events that have reflected the shape and direction of society at the time and it would be unfair to compare Sir Ian Blair on that basis. He is very much a product of our times. He is media-led but media-savvy; he is politically astute, but remains neutral in his application of policy.

He is undoubtedly a man of high intellect, but like a doctor with no bedside manner he cannot communicate effectively either with his colleagues or with the public. Instead, he relies on the authority of his position to convince himself and others of his inherent faultlessness.

However, Stockwell was not his fault. His speech after the verdict was accurate and truthful. The events surrounding the shooting were freakish in their nature and in the speed with which they evolved. They combined to produce the tactical equivalent of a "perfect storm" and there can have been few officers involved who had ever participated in such a unique and tragic event.

He should not resign just because of Stockwell. It is instead the culmination of self-inflicted failings that have brought his standing to such a low point. Being the Commissioner of the Metropolitan Police Service is not Sir Ian Blair's forte.

How could the Prime Minister resist the headline, "Brown Sacks Blair"?

Yes, the IPCC said he tried to obstruct their investigation into the killing of an unarmed man by pumping 7 shots into his head. This man is supposed to be the head of an organisation dedicated to protecting the public. He has failed to do his job. He must go now before he kills any more innocents!
Martin Ouseley, UK

Yes Blair should go. After the shooting of JC Menezes, he stated that "We should expect more of the same" i.e. more innocent people being mistaken for terrorists and yet after the court ruling he said that this was a "one off and unlikely to be repeated" Well which is it? He can't have it both ways.
Phil, UK

Stop the hating of Muslims plea after Woolwich slaying