Blatant 'state takeover' behind EU and US Libyan operation 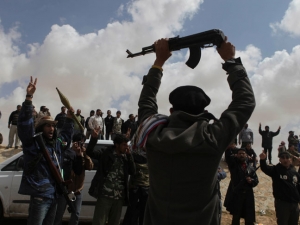 Having taken over Libya, NATO exposed its hypocrisy towards protecting civilian lives, letting the revolutionary forces shell loyalist cities and assault them despite great losses among the civilian population.

­For over two days now, Libya's interim rulers have been waging one of the biggest assaults yet on the most-important remaining Gaddafi strongholds, the cities of Sirte and Bani Walid.

Libyan revolutionary forces claim they have seized parts of convention centre, which served as a key base for Gaddafi loyalists in his hometown of Sirte.

They say most of the town is under their control now, but still face fierce resistance from loyalist fighters.

Thousands of people have left Sirte, but many remain behind, meaning there is a high risk of civilian casualties.

But for peace campaigners, the fact that NATO is protecting civilians by shelling Sirte, shows the alliance's approach is selective.

Lindsey German,  national convener of the Stop the War coalition said: “The whole idea of the bombing was meant to protect the civilians in Benghazi but I don’t suppose anybody signed up to the idea that it meant killing civilians in another city or town in Libya - and that is exactly what is happening.”

German added: “NATO is very selective about what civilians it supports. It doesn’t support those civilians who might oppose it politically - it does support the other ones.”

“We know what this war was about - it was about regime change,” concluded German, adding that NATO does not care about the civilians so it is now “the responsibility of the people who run Libya.”

WikiLeaks founder Julian Assange told Russia Today that it is a warning for everyone that the Libyan intervention was solely about the US and Europe taking the country over.

“The lesson for Libya is that there are only two superpowers in the world worth speaking about, those are the US and the EU,” Assange claimed.

Once the EU and the US joined their efforts to topple the Gaddafi regime, they completely abused the original justification of the no-flight zone over Libya.

“It shows that there is no effective rule of law as far as the UN is concerned,” Assange concluded, adding that this "should all be a lesson to us: every time that a small mandate is given, the military and intelligence powers will push that [to a war].”

He said: “This is a slippery slope that leads to the takeover of countries - we must all understand that.”

Jackson doctor's passport seized by court as he is bailed