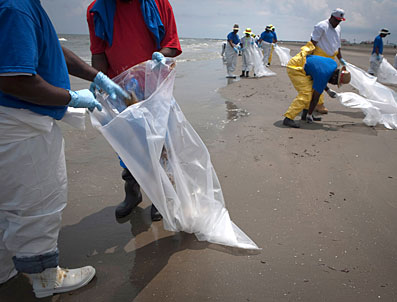 In tiny Grand Isle, where the BP workers now outnumber the full-time residents, Rebecca Dana talks to locals fuming that ex-convicts are among the cleanup workers and hears about unwanted advances, rising crime, and shout-filled town halls.

Everyone used to leave their doors open in Grand Isle, an isolated beach community on the southwestern edge of Louisiana. But now neighbours are building fences, business owners are contemplating security systems, and even the teenage “Cajun Sno-Cone” vendor locks her pickup window at night.

It’s not the executives who bother them but the 832 cleanup workers now employed, at $12 an hour, to help lay boom, dispose of tar balls, and otherwise undo the damage caused by the oil still gushing into the Gulf of Mexico.

“Obviously there have been some conflicts, some growing pains,” said Jason French, BP’s point man in the region. “Am I going to tell you there’s not a single person here who’s been convicted of something? No.”

Some of these workers are ex-cons—a fact that leaves locals fuming and BP shrugging its shoulders helplessly; after all, someone needs to do the dirty work. Many are poor and black, some drink, some get into fights, all are desperate for these jobs. They have poured into a once sleepy, overwhelmingly white coastal town whose residents are already worn to breaking point by the oil spill, dealing with lives lost, family businesses destroyed, and the daunting prospect of rebuilding.

The result has been less a melting pot than a boiling cauldron. Locals say crime in the area, once negligible, is on the rise: Someone stole a five-gallon gas can the other night. Someone else says his fishing pole was swiped. One man caught a group of workers lounging on the porch swing under his home.

BP acknowledges there have been incidents and that workers have been dismissed for bad behaviour or past convictions. But, in the most diplomatic language possible, a company public-affairs officer suggests that perceptions of skyrocketing violence are more imagined than real—like the headaches everyone’s been complaining about lately, even though all the state and federal air tests keep coming out clean.

“Obviously there have been some conflicts, some growing pains,” said Jason French, the oil company’s point man in the region. “Am I going to tell you there’s not a single person here who’s been convicted of something? No. But many of them work hard every day and care about what they do. I think people here sometimes paint with a broad brush.”

Before the Deepwater Horizon explosion not far off the area’s wide, white beaches, Grand Isle’s residents didn’t have much need or occasion to interact with the outside world. Tourists came and went, but full-time residents, many third- or fourth-generation fishermen, all knew each other and have for decades. Their little island community, full of pastel-colored wood-slat homes with cutesy names like “Recovery Room” or “It’s Five O’Clock Somewhere,” felt cloistered and safe.

Now, Grand Isle is occupied territory, its residents suddenly a minority group. The year-round population is 1,500, and as of the last headcount, BP has 1,743 workers here.

Many locals lost their livelihoods in the spill. Those in the oil business are out of work until president Obama lifts the moratorium on exploratory deep-water drilling. The fisheries are decimated. Tourism is dead. About the only thing still kicking are bars and restaurants frequented by the legions employed by BP.

Sarah Rigaud, the tiny, 75-year-old owner of Sarah’s Diner on Route 1, the only road through town, has lived in Grand Isle for 57 years. Last year, she lost her husband of more than half a century. After the oil spill, the stress became too much to bear. “I went to the doctor to get medicine for my nerves,” she said. “I couldn’t take it. I was screaming and hollering at everyone who works here, and that’s not me.”

Rigaud paid no attention when Obama toured Grand Isle. The Secret Service blocked off the road for his visits. The first time he came, shortly after the spill, local contractor Wesley Bland went up on the highway to get a better look. “It was the neatest thing I’ve ever seen,” he said. This from a man who has no love for the US government.

While Bland sat up on the highway, he witnessed something else, considerably less neat. Five school buses full of workers pulled up an hour before Obama arrived. The men hustled off the buses, put on uniforms, and scurried up over the levee, so by the time the president got there, it looked like they’d been hard at work for days. An hour after the president left, the men loaded back up onto the buses and drove away. This was Grand Isle’s inauspicious introduction to BP’s hired hands.

Hearing the story, French shook his head. “I know exactly how it looked,” he said. “I hate when company people won’t acknowledge the optics.” The optics were bad but the reality less so: Yes, BP rushed to get the workers here in time for Obama, but it’s not true they were just props for a photo op, he said. Shortly after the president left, there were reports of lightning, so work had to be called off for the day.

But perception is a problem. Grand Isle fishermen who’ve spent their lives working long hours out on the water in suffocating heat see workers in Tyvex suits resting for 40 minutes at a time on the side of the road—a period mandated by federal regulations. They see them in their off hours, hanging around town. They serve them food and alcohol and don’t sense much compassion.

After their shifts end, the workers flood the local bars—Artie’s and Rome’s, two dim, weather-beaten dives—and drink. Sometimes they flirt with the local girls, whom they outnumber, by some estimates, 200 to 1.

Bland got into a fight at Artie’s bar the other night trying to defend the honour of a local girl who was struggling to ward off a cleanup worker’s unwanted advances. “You can’t come down here and rub up on this little country girl just because you are where you’re at,” he said in his home office .

Over at Artie’s , a pair of young women were more pointed in their complaints.

She gave her age as 28 and her name as Jenny Smith, but at one point her friend, a 22-year-old Coast Guard service member wearing thick black eyeliner, called her Stephanie. They had nothing to do this summer since the beaches were closed, fishing was prohibited, and all the local rodeos had been cancelled. Sometimes, they went up to the roof of Artie’s to take pretty cellphone pictures of the oil glinting off the water. “We mostly stay home and play Wii,” Jenny/Stephanie said.

BP has tried a variety of strategies for making peace in the community. The company held town halls, which turned into shout-fests, so it switched to smaller crawfish boils at townspeople’s homes. This Thursday is movie night; the company is bringing in an old-fashioned popcorn machine and screening Cloudy with a Chance of Meatballs.

It is spending more than $10,000 to build a volleyball court. It has set up a program to pay young people to do community-service projects and already vowed that all 151 local children will go on all the rides for free at a three-day carnival coming to town in July.

“We’ve had a turning point, just in the last 24 hours,” French said, “when for the first time ever, the compliments have outweighed the complaints.”

Although, he allowed, that may have something to do with the second round of $5,000 checks that just landed in everyone’s mailboxes.

*Rebecca Dana is a senior correspondent for The Daily Beast.