Kenyan opposition party supporters were demonstrating on a main road in the country's capital on Friday as part of a nationwide protest against alleged vote rigging in last month's disputed presidential election. Marc Wadsworth was there and sent this eyewitness report.

They were putting their lives at risk. Human rights campaigners say police have shot dead more than 30 unarmed protestors since the August 8 poll – a figure disputed by the government. I saw tear gas fired by riot police, and many officers, some of them mounted on horses, had heavy weapons drawn.

The metal shutters of Saape restaurant and bar, in Koinange Street, where I was eating, were rapidly pulled down by staff and panicked customers fled to the back of the premises.

Outside the protesters chanted, in the Luo language: “Onge ng'ama baba osenego.” (Baba, father, has not murdered anyone). This was an ironic reference to opposition leader Raila Odinga, leader of the National Super Alliance (NASA) not having assassinated senior election official Chris Musando.

He was tortured and killed last month during the controversial presidential election that saw incumbent Uhuru Kenyatta win with 54 per cent of the vote.

Some people suspect government involvement in the slaying because Musando is said to have held secret computer codes and NASA has alleged that election computers were hacked. The presidential election result was overturned on September 1 by the Kenyan Supreme Court in an unprecedented ruling that cited irregularities in the counting process overseen by the Independent Electoral and Boundaries Commission (IEBC). Opposition protests to remove top IEBC officials in whom they say they have no trust, ahead of the fresh presidential poll, have taken place in different parts of the country.

NASA accuses the officials of bungling the August election in favour of Kenyatta. Its Supreme Court petition resulted in the annulment of the election with judges ordering a fresh one to be held  within 60 days.

Business was disrupted on Friday in the second biggest city Mombasa, as well as Kisumu, Kakamega, Siaya and Homa Bay counties, when the now twice-a-week demos resumed. Government sources say protests sparked by Odinga's refusal to accept defeat has resulted in a sharp reduction in much-needed tourism, businesses suffering a drop in customers and civil unrest.

The disputed 2007 election led to the loss of more than 1,200 lives, most, say civil rights groups, at the hands of the police and military. Clenched fisted and dressed in different colours, opposition supporters, led by Kisumu Women Representative, Rosa Buyu, marched defiantly through Nairobi's central business district raising their hands, chanting NASA slogans, to the IEBC headquarters at Anniversary Towers. Buyu told The-Latest: “We have a right to demonstrate peacefully, we want peaceful elections, we need reforms.” 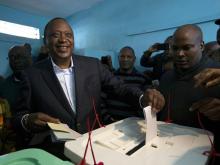 This prosperous East African country is divided by “tribalism”. Kenyatta is a Kikuyu, the largest group of people based mainly around the capital Nairobi, and Odinga , a Luo. They are a minority people from the western Lake Victoria region. Former US leader Barack Obama's father was a Luo and the joke goes there is more chance of a Luo being an American president than taking the top job in Kenya. Nairobi university students have been behind many of the protest in the capital.

One of its law students, Lydia Oyugi, a Luo supporter of Odinga's NASA, said: “The system is rigged against us. I am among many people in this great nation of ours that believe Raila won the last three elections (2007, 2013 and 2017) but Uhuru is so desperate to cling on to power he made sure he ‘won’t by fair means or foul.” 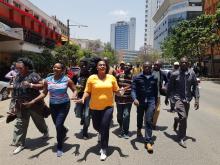 She added: “Young people like me, who are this country's future, are bitterly disillusioned with the crooked political system and we demand change. That's why we are prepared to put our lives at risk and demonstrate on the streets. Thank God the media has ensured that police brutality is caught on camera for all to see around the world despite government denials. Democracy must prevail.” The court ordered re-run of the presidential poll takes place on October 26, and cynics predict that Kenyatta, son of Kenya's first President, Jomo, and leader of the ruling coalition Jubilee party, will be “re-elected".

*On October 10 Odinga withdrew from the rerun poll after his demand that election officials be sacked were not met. He hopes to force a cancellation of the vote, rather than it going ahead without him.