Our government is playing a key role in arming repression throughout the Persian Gulf with devastating consequences for democracy and human rights.

Driving government complicity in state violence in the region is a secret “Gulf Strategy Unit” and a murky network of British officials and corporations operating in the region.

Prince Charles heads to the Gulf in November on behalf of the British government. His mission: “to strengthen the UK’s warm bilateral relations with key partners in the region.” Charles is no stranger to the region but on thisoccasion, before he packs his royal sun hat, I suggest he reads War on Want’s new report Arming Repression: The new British Imperialism in the Persian Gulf.

The report, written by Dr Sam Raphael, details for the first time the sheer scope of weapons exports and training provided to regimes in the Gulf in order to police their own populations.

The report uncovers the extent of British complicity in state violence in the Gulf and reveals a disturbing truth at the heart of Britain’s foreign policy. For “warm bilateral relations,” read opaque and loosely connected network of British state and corporate actors operating in the region and focussed on assisting repressive regimes with “stabilisation” and “internal security.” Charles should think again.

British governments have long regarded the Gulf states as “key partners” in securing Britain’s energy security and military interests. Yet today the strategic importance of the Persian Gulf is taking on a new significance. 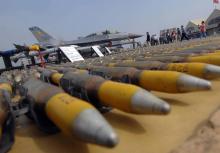 The British government is in the process of building a permanent presence in the region and establishing a dedicated British Defence Staff to oversee it.

Co-ordinating this new level of strategic engagement is the mentioned Gulf Strategy Unit which operates in secret. Central to the new strategy is the establishment of a network of facilities and partnerships.

New and enlarged bases in countries including Dubai, Oman and Bahrain will enable Britain to present a more assertive position in the region and to safeguard the all-important outward flow of gas and oil.

At the same time, British arms companies continue to sell vast amounts of weaponry to support the Gulf states’ own military expansion.

Since 2010, the British government has approved over 6,000 individual export licences to arms companies serving the region, with a combined value of £16 billion.

More than 120 licences, valued at £45.6 million, included the sale of items specifically designed for aggressive crowd control. From tear gas and ammunition, to CS grenades, water cannon and acoustic devices designed to cause severe discomfort and disperse crowds. These items were destined for Oman, the United Arab Emirates and Saudi Arabia.

British strategy has also centred on arming and training police and security forces across the region in order to maintain internal security. Some 300 College of Policing staff and associates have delivered training to Bahrain, the UAE, Qatar and Saudi Arabia since 2012.

Britain’s strategy is not just government-led. There is a growing involvement of private security companies and defence contractors working hand-in-glove with the British foreign policy and defence establishment, as the privatisation of war continues to pick up pace. 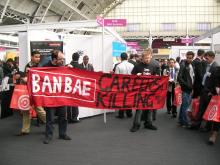 And surprise, surprise, it’s the usual suspects including BAE Systems, Olive Group and G4S providing training to the police and military in the region.

This is the latest chapter in the long and violent history of British imperialism in the Persian Gulf and the government’s renewed military and economic plan is putting Britain’s access to oil front and centre and makes a mockery of any commitment to democracy and human rights.

The government has a serious case to answer when clandestine meetings between public intelligence and security agencies are driving Britain’s role in arming repression in the Gulf.

It’s time the government came clean on the personnel, objectives and activities of the secretive Gulf Strategy Unit.

It’s time too for an immediate ban on exports of arms and repressive technologies where there is a risk of supporting internal repression and human rights abuses.