'Britain's rise in protests with much more to come' 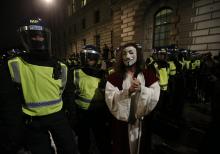 In the wake of the 2008 financial crisis and the austerity agenda that followed, the year 2011 is widely viewed as the peak of protest and dissent. It was the year of the Arab Spring, Occupy, UK Uncut, indignados, urban riots and anti-austerity and tuition fee protests – and in which Time magazine famously named “The Protester” as its person of the year.

Yet in the UK, protests continue to occur at a rate rarely seen prior to the global economic crisis in 2008. Indeed, 2015 seems to have confirmed the suggestion, made at the beginning of the year, that 2011 was “really only just the beginning”.

In fact, we appear to be facing a longer-term age of contestation, perhaps prompted by the experience of low growth, and the hardening of attitudes by mainstream politicians despite growing popular demands.

As part of a research project looking at protest events in the post-2008 context, I have recorded a catalogue of UK-based protest events reported in major British national newspapers, spanning back to the late 1970s. And it suggests that 2015 actually had the highest level of visible dissent in the UK since before the 1980s.

In updating the dataset of protest events, and building on earlier estimates made on the basis of data covering the period up until 2012, we can see that the frequency of protests peaked in 2010-2011 and subsided slightly in 2012 – perhaps as a result of despondency after some of the big anti-austerity movements, such as the tuition fee protests, were ignored and/or heavily repressed. But from 2013 onwards dissent has returned to levels witnessed during earlier stages of the anti-austerity movement, and continued to rise through to a new high in 2015.

We can also use this dataset to assess changes to the types of protester involved. As the figure below shows, dissent in the 1980s was overwhelmingly conducted by workers and organised labour. In contrast, the protests during the heyday of the anti-austerity protests in 2010-11 were conducted predominantly by three main groups: workers, students, and those anti-cuts activists identifying explicitly with the anti-austerity movement, such as UK Uncut.

What was noteworthy about the dissent and protest which took place in 2015, however, was its considerably more pluralist nature which involved seven key groups of protesters dominating protest politics. While workers and environmentalists conducted around one-third of all protest events in 2015, another five groups – housing activists, students, pro-minority groups (including those supporting refugees and asylum seekers), anti-cuts activists and right-wing groups – each contributed between 6 percent and 10 percent of the total protest activity for the year.

We can also use the catalogue of protest events to identify changing patterns of protest. Thus, the figure below shows trends for the seven most popular forms of dissent between the 1980s and 2015. In the 1980s, strikes and wildcat strikes made up 50 percent of protest events, a figure which shrank to 17.5 percent in 2010-11 and remained at around that level in 2015 (22%).

The big change in 2015, however, was the rise in the “other” category – that is, protest events that did not fit within the most common forms of protest. This was largely explained by the relatively large number of “stunts” carried out by protesters in 2015 – reflecting growing innovation among contemporary protesters (itself possibly explained by the increased need to stand out in order to attract media and public attention).

This includes the baring of the bottoms of the 12 Reclaim the Power protesters outside the Department of Energy and Climate Change, adopting the slogan, “wind not gas!” at the beginning of June. It also included Vivienne Westwood’s driving a tank to David Cameron’s home to protest against fracking in September and the public discarding of medals by veteran soldiers protesting against the government’s decision to begin the bombing of Syria in December.

So what’s the gripe?

Given that 2015 had the highest frequency of reported protest events in the UK since the 1970s, we might also identify what these protests were about.

In terms of strike actions, the transport sector witnessed some of the biggest strikes, with Unite overseeing strike action by bus drivers in a dispute with London bus companies over the standardisation of pay, and RMT tube workers taking strike action over the introduction of all-night tube services.

2015 also saw the beginning of a novel form of quasi-strike action by solicitors and barristers in their move to cease taking on new cases in protest at the government’s cuts to legal aid. There was also an escalation of the dispute led by PCS union members at the National Gallery over privatisation, leading to an all-out strike which began in August and which was only resolved in October after negotiations led to a deal on pay and conditions, as well as the reinstatement of one of the sacked trade union reps involved in the dispute.

The housing crisis also prompted a large increase in 2015 of housing-related protests, including the occupation of Sweets Way Estate in March, the occupation in April by members of the Focus E15 housing campaign group of a flat from which resident Jasmin Stone had earlier been evicted and the occupation of empty properties by groups such as Manchester Angels and Camden Mothership protesting against homelessness (as well as trying to find opportunities for housing).

Some of the biggest demonstrations of the year continued to focus on the government’s austerity measures, including the 100,000 attendees at the People’s Assembly Against Austerity in June and 50,000 people protesting outside the Conservative Party Conference in October. September also saw 30,000 demonstrators calling for the government to do more to help refugees, and in November 50,000 environmentalists demonstrated in support of stronger government action to be agreed at the Paris summit.

But did it change the world?

Finally, while some commentators have begun (again) to proclaim the futility of protest, some important concessions were also won as a result of the 2015 protests, confirming recent research which suggests that only direct action protest consistently produces desired results in times of stagnant economic growth.

Sports Direct recently agreed to pay all staff above the national minimum wage, following protests which included Unite members dressing up as Dickensian workers to protest the pay and conditions suffered by employees of the company outside its AGM.

The tube workers’ strike resulted in the apparently indefinite delay of the implementation of all-night opening.

After more than 60,000 people signed a petition in February against what was perceived to be an attempt to charge for the right to protest, the Metropolitan police backed down in its attempt to make two organisations – Campaign Against Climate Change and the Million Women Rise campaign – pay the policing costs necessary for them to be able to hold demonstrations.

Direct action protests by milk farmers also resulted in a number of concessions from supermarkets, including Asda agreeing to a minimum payment per litre for milk. And the students staging a rent strike at UCL won nearly £100,000 in compensation – or £1,368 per head – following a successful campaign against the university which also led to it backing down over its threat to prevent students from graduating unless they ended the strike.

While the frequency of reported protest events in the UK rose in 2015 to its highest level since the end of the 1970s, 2016 looks set to bring still more discord. The ongoing housing crisis, the industrial dispute over junior doctor’s contracts, and the apparent willingness of Jeremy Corbyn to use his position as Labour Party leader to fuel further mobilisation and dissent (for instance, by recently attending the passenger protest against rising rail prices), suggest that 2016 will be a year in which protests, in the ongoing context of prolonged economic stagnation, continue to gather pace.

*David J Bailey is a lecturer in politics at the University of Birmingham and he writes for The Conversation.com.