'Bush has caused the most terror in the world' 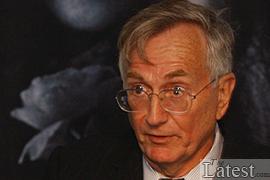 Seymour Hersh, one of the world's best known investigative journalists, has turned his attention to the mysterious and controversial bombing of a Syrian facility by Israel.

In a new article for the New Yorker magazine, the Pulitzer prize-winning journalist, best known for his work exposing the My Lai massacre in Vietnam and the horrific mistreatment of Iraqi prisoners at Abu Ghraib prison, says evidence indicates the bombing was a warning to Syria and its allies, including Iran.

Al Jazeera's Sarah Brown spoke to him about the bombing last year, why he feels the media failed on the story, and what it means for the Middle East.

Q: Why did Israel bomb a target in Syria?

A: Well I don't have the answers to that direct question - one thing that is terribly significant is that the Israel and its chief ally the US have chosen to say nothing officially about this incident and that's what got me interested - whoever heard of a country bombing another one and not talking about it and thinking they had the right somehow not to talk about it?

In 1981 when Israel bombed the Osirak reactor in Iraq they were very noisy and public about it. In this case they said nothing publicly, but after a few weeks they began to leak [information].

They began to tell certain reporters very grandiose sort of stories about what was going on - ships arriving with illicit materials, offloaded by people in protective gear ... from a port in the Mediterranean across to the bomb site, commando's on the ground, soil samples.

And none of it turned out to be true, really, at least I could find no demonstrable evidence for it.

And so I have to say, that if this article I did generates a decision by Israel to go public with its overwhelming dossier that will answer any questions well that's great ... but they have not and [I find awful] the hubris, the arrogance of thinking that you could go commit an act of war by any definition and then say nothing about it.

Syria of course compounded the problem by being hapless and feckless in response. It took them, I think, until October 1, almost four weeks after the incident before the president of Syria, Bashar al-Assad, acknowledged it had actually been bombed.

Q: Why was Syria's reaction so muted?

The bombing was seen as a message to
Bashar al-Assad, Syria's president [AFP]
A: I think they're just hapless. I don't think they have any idea about the 24 hour news cycle  — it's just unbeknown to them.

So what happened is: A raid takes place, they announced rather quickly there was an intrusion by the Israelis, they initially say after a couple of days that munitions were bombed, then the foreign minister says in Turkey four or five days after the incident that nothing was bombed however, bombs fell but nothing was hit.

Then, three weeks later, the president says: "Oh, well actually a building was destroyed". You can't programme something that inept and that's a reality. They just weren't very good.

But there are other factors.

Q: Such as North Korea?

A: There were North Koreans, as the Israelis claimed at the site. They were building a facility, it was a military facility, I think my guess would be.

I was told two different things by various people inside Syria.

One said it was perhaps a chemical facility for chemical warfare, another one said more persuasively to me that "no, it was for missiles - short range missiles to be used in case we're attacked by Israel, we'd respond asymmetrically with missiles."

Q: Because they figure chemical weapons are of little use against a nuclear power?

A: Yes. They're incinerated. And I'm told they made that decision much longer ago than we might think.

I'm told they really devalued the use of a chemical warhead, certainly as a deterrent, because the response is nuclear.

Q: Didn't some of your sources tell you there was evidence to support the theory that the US wanted Israel to test Syria's air defences because they are similar to those of Iran?

Seymour Hersh
The little bit I know about that process was in the summer, months before the mission, there was a lot of talk about doing the mission [and] there was a report in the intelligence community from the Defence Intelligence Agency saying that Syria had dramatically increased the capability of its radar and command control system.

[It said that it had] anti-aircraft radar close or parallel to that now known to be installed in Iran - so this was a way of testing the Syrian radar.

You can walk all over Syria and no-one cares, it's a small country of 17 million people. But to go into Iran and check out radars by overflying any site, that leads to counter attack.

The Israelis have been overflying with impunity, there's not much Syria can do and [the Israelis] knew Syria wouldn't do anything.

So it was initially understood by my friends as a radar operation, it was only after the fact that they learned something else.

Dick Cheney, left, is said to have
overridden the US chain of command [AFP]
It was very hard to get information [in Israel] because they have a bar against speaking and military censorship has been imposed on this issue.

But I did get some people to say to me "Ah, that stuff about radar was [rubbish] - it was never going to happen, that's a way or a vehicle for us to get in".

It seems clear from what I've learned from my American friends and the Syrians that the Israelis came right in and the only target they had was the one they bombed.

They weren't looking at any radar site, they just went in and whacked it.

So, then you really get to the next level of questions that I didn't really deal with in the article because it's so hypothetical  — who authorised it?

Who did they talk to? I mean Israel does not do a raid like this without talking to the White House and I can't find anybody that knew they were going to hit the facility beforehand.

That could be that just I can't find it, and if not that doesn't mean it's not there, and it could also be that somebody like Dick Cheney, who has done this before, overrode the chain of command.

So in other words, normally all this information about an Israeli attack would soak through to the joint chiefs, but he undercut that process perhaps - he's done it before in other incidents - but I just can't tell you for sure what happened here.

Q: Was the raid's purpose to act as a potential deterrent to Iran?

A: Of course that was the idea for the US, to let the Iranians know that despite the national intelligence estimate "We're ready to ... we have a proxy and the Israelis will go bang for us if we need."

"I think the Israelis were troubled by the North Koreans there [at the site] ... and they thought: 'Whatever it is we're not going to let them be'"

Seymour Hersh
But of course, for Israel, this whole mission had another point of view.

If they thought it was nuclear I hope they'll show us, otherwise they just hit a building that wasn't done yet.

And the [result] was terrific for them, because it gave Olmert a big jump, a big boost of support

Absolutely. And also it was seen as a message to Bashar Assad, the president of Syria, who the Israelis believe has become cocky after the Hezbollah war because he was a big supporter of Hassan Nasrallah [Hezbollah leader]  — he is Assad's big buddy.

The Israelis thought that they could take him down a peg, and also the message to Bashar Assad is: "So, what's Iran doing for you now, buddy? We go and pop you in the head and is Iran doing anything?"

And the American press and the international press end up being used on this one [story] in a scandalous way.

Q: On media culpability, this was a big issue in the lead up to the war in 2003 - questionable evidence that supposedly provides a cause for war. Is the media being manipulated again here?

A: The press was feckless on this and credulous and took everything at face value.

For me the US press - I don't think they've come face to face with what happened here.... the newspapers missed without question the biggest moral story of the last decade, which is the illegal road to war in Iraq and we missed it.

And that's not our job, it's not our job to miss that, our job is not to listen to the president. There were elements of the same pattern of "kiss-up" going on and that's very disturbing.

Q: With US elections this year, do you think any foreign policy is going to change with a new president, especially towards Israel, Iran and Syria?

A: Well certainly [it won't change] with McCain, he's talking about not even changing the war, which I think is a big mistake.

Somebody I know wrote a wonderful essay making the point that Iraq is a dead body, and David Petraeus, the general, and our ambassador Ryan Crocker they're the undertakers, and their job is to keep up with the rouge and the makeup on the body for the next six months until we get past the election - that's their goal.

[On Israel] it's very hard, you know in America there's just no questioning. The American Jewish influence is enormous. There's a lot of money.

I just wish many American Jews would read the Israeli papers - particularly Haaretz - more carefully and they would see there's really a vibrant criticism of the Israeli government ... and you just don't see that today.

Not everyone spends their life there wanting to kill Jews, they're more willing than people would like to believe to co-exist, they just don't like the system the way it works now.

Q: What do you think of Bush's legacy to the world?

He's done more to terrify the world than anybody I know. The world is so much more dangerous.

I have a very wise friend, born in Syria, who's a businessman in the West now.

Right after the bombing began in Iraq he said to me: "This war will not change Iraq - Iraq will change you" and so I've seen it come and it's very scary.

How Black creative students have been struggling during pandemic