Campaign of hate, sir? Here, have the Daily Mail 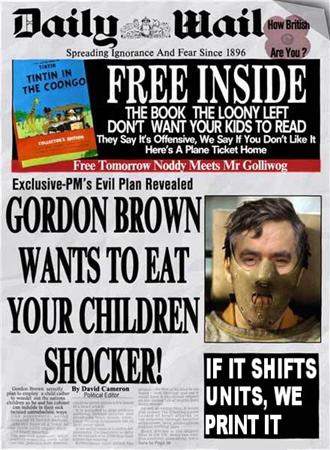 Sometimes, there's a fine line between what can be regarded as good journalism and a vendetta or grudge. However, certain newspapers, blogs, Tv programmes and radio shows make it all too clear just how much they're willing to go out and "get" someone… even if it's clear that the truth has been bent out of proportion in the process.

The worst offender? Fascist tendencies aside - which, in my opinion, likely expels the Daily Express - it's the Daily Mail, bar none. One moment on Monday September 21st encapsulated absolutely everything I hate about the paper in one swoop.

Before I go into detail, let me get things straight. I hate the Daily Mail. I hate the snobbish, classist bile that has been known to flood out of its pages. I hate how it needs to convey to people to loathe the poor who they don't agree with by following their name with "jobless, three kids, living off benefits". I hate how they back the Tory party with increasing fervour despite them being led by David Cameron, the only politician incapable of making steadfast policies that aren't purely reactionary.

I'm a left-winger, sure, yet I like to think that reasoning comes into every facet of day-to-day life. However, in its bid to take over the world, the Daily Mail's slimy tentacles are reaching out into many pies, turning a once wholesome filling into one not even edible.

The poor quality of journalism at its best in the paper's so-called TV and Showbiz section - a cavalcade of hate, deceit, lies and anger directed at anyone in the limelight. It all starts to fall into trends. Katie Price otherwise known as UK glamour model Jordan is doing this, for example. Oh, hasn't supermodel Kate Moss aged badly? My goodness, why's that little angel now a slag? And so forth.

One strange trend seems to have been surrounding the airbrushing debate - or, as everyone else knows it, Marketing 101. Considering we live in one of the most developed consumer economies in the world, you'd think the press - which is known for doctoring images themselves - would be the last ones to criticise others, given that's how you promote things. A lift here, a smudge there and the job's a good'n - more sellable, at that.

But no. In the last year or so - and you can search the Daily Mail website as proof - there have been at least 15 stories on the cult of airbrushing. Well, I say cult. It's essentially times when promotions have needed someone that's not only a good actor, singer or personality, but one that's perfectly attractive too. They do their best, of course, though they need a little bit of a boost.

For example, one article went into intrinsic detail about the size of international film actress Keira Knightley's breasts. It's actually pretty sickening, really. Okay, we get it, she doesn't have a bust. We've known that since she appeared in the movie Bend It Like Beckham .

But what about Ricky Gervais, the love/hate figure from comedy shows and films around the world? Well, those wrinkles certainly didn't show on his recent poster for the film The Invention of Lying.

British actress Kate Winslet, despite looking in her mid-20s anyway - and utterly stunning at that - isn't apparently allowed to have blotchy skin on a serious photoshoot according to the Daily Mail, which is why they got an expert in to say exactly why she isn't as attractive as she blatantly is.

And the worst thing is, the Daily Mail makes itself out to be a bastion of justice; a freer of minds; a firm proponent of truth.

Yet one twisted sentence was all it took to show just how needless vendettas boil over to seemingly incandescent rage. Congratulations, Daily Mail - only you could ever make me feel sorry for Kerry Katona, former member of UK girl band Atomic Kitten.

On the morning of Monday September 21st, the Daily Mail put up a story regarding her questionable character titled "Laughing Kerry Katona swigs an alcopop during family trip to the beach".

The implication of her "swigging" from a bottle was already enough, making her out to be a booze hound which many people have alleged her to be. Regardless of whether or not she was, she still only drank one bottle of Smirnoff Ice - something kids drink at parties when they can't afford better and can't handle the taste of any real drinks.

In just three or four hours, the headline changed to "Kerry Katona swigs vodka on a family trip to the beach", which is how it remains. Of course, the Daily Mail seems too thick to cover its tracks, given that the original is in the internet browser header and the URL of the page, which reads Laughing-Kerry-Katona-swigs-alcopop-family-trip-beach.html.

So not only did they drop "laughing" out of the title - god forbid she tries to have fun while she's bankrupt and likely to fight for her kids - but they made out like she was sat letting her kids prance around in between bear traps and needles while she sat on the kerb swigging neat white spirit.

Sure, there's vodka in there, but is it *really* vodka? Well, no, not in the eyes of pretty much everyone.

"Well, ethanol's in beer," the idiots would claim. Yes. It's just remarkably diluted.

And as for the Daily Mail comments section, which is usually filled with reactionary and gullible bile, we have some common sense from some in regards to Kerry Katona from Mary M of Manchester:

"No more Jordan. No more Kerry. Please please please. Find somebody else to write about."

Cora of Maidenhead did pretty well, too:

"It's one Smirnoff Ice! 5% at the most. OK, perhaps unwise if you are followed by the paps but hardly the crime of the century. I know she has brought all this press attention on herself but give the girl a break!"

I'm addicted to the Daily Mail now (online, of course... I'm never going to pay for it). It's like watching a car crash's aftermath. Except the car has the wrong number plates, someone's made a hasty paint job to hide important evidence and the reporters covering the scene all turn up in opaque sunglasses, carrying white sticks.

Oh, and they ignore it if there's even the slightest chance of an immigrant or an ethnic minority inside.

Even if they want to sell papers, it's just not right. The Daily Mail's desperation in its last minute changing of "alcopop" to "vodka" only cements the fact that it was not a story: just a violent stab at a celebrity who's already, sadly, the walking dead.

Palestinian tells of her troubled trip to Jordan

Thoughts on Black History Month in the US

1 Response to "Campaign of hate, sir? Here, have the Daily Mail"

<p>Nice article Matt...appropriate...and though I am not essentially a leftist...but I would agree to the fact that sensationalism is taking over quality, these days...</p>