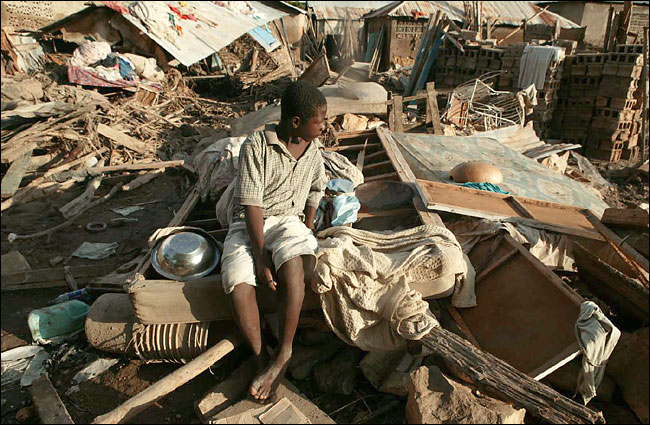 In the wake of last weeks catastrophic earthquake in Haiti, which has left more than 200,000 people dead, the World Development Movement has joined the Jubilee Debt Campaign in calling for an urgent cancellation of all of Haiti's remaining debt.

"The poverty that already exists in Haiti will be even more devastating as a result of this emergency and it clearly requires high levels of aid to combat it. This should also come with wholesale debt cancellation and the need to need to ensure that aid is given in the form of genuine grants as opposed to traditional International Monetary Fund-backed loans, which would undoubtedly worsen an already dire situation", said Julian Oram, head of policy at the World Development Movement.

He added: "We welcome the cancellation of two thirds ($1.2 billion) of Haiti’s debt in 2009, but condemn the fact that the country still has $641 million in debt on its books and in 2010 is projected to pay around $10million to international financial institutions."

"We also think that the International Monetary Fund’s (IMF) proposed offer of $100 million in new lending to Haiti is completely inappropriate. Even though lent at very concessional rates of interest, the proposal contradicts the IMF’s own policy recommendations that Haiti should not borrow more money because, even after debt cancellation, its potential for debt distress remains high."

The IMF’s loans current conditions include: raising prices for electricity, refusing pay raises for any public sector employees except those making the minimum wage and keeping inflation as low as possible. The WDM argues that Haiti is still suffering as a result of conditions applied to its economy in the past.

It is writing to international finance ministers to urge them to cancel Haiti's unjust debt repayment and to register deep concern over the IMF's new proposed loan.

Nick Dearden, director of Jubilee Debt Campaign, said: “Haiti’s dire poverty has been built on centuries of injustice perpetrated against the country by the rich world. It is time for our part of the world to pay its debt to Haiti. That means full cancellation of all of Haiti’s debts and large grant funding. It is completely inappropriate for international institutions like the IMF, which bare a good degree of responsibility for the poor state of Haiti’s economy today, to be making new loans with more damaging conditions.”

Obama should be proud of Hussein name