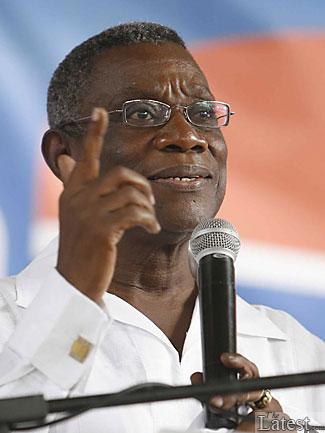 It's the end of an era for ex-president of Ghana, John Agyekum Kufuor, and victory for John Atta Mills. With the election of a new party, the National Democratic Congress (NDC), should Ghanaians unite in chanting  "Yes We Can", as American President Obama had urged his people to do?

Ghana's newly elected president, who took the oath of office on January 8, has said:  "There is one Ghana …with the elections over, there is only one Ghana to fight for …the time has come to work together to build a better Ghana."   Judging by his campaign, based on a promise of good and honest governance, I have no doubt that Atta-Mills, 68, will bring development to Ghana, but isn't this similar to what previous President Kufuor, 71, had declared?

Kufuor, who had served two terms, the maximum allowed for any president in Ghana, said:  "From today, we must learn to smile again. We must learn to appreciate the good in each other and we must feel pride in being Ghanaians.  "Appreciating the good in each other? After hearing of   the frightening encounter with armed robbers at her house of a close relative of mine, along with a spate other nasty robberies in the country, Kufuor's words do not seem to have materialised.

Pride? I have to say that seeing Ghanaians bound together by the achievements of their football team, the Black Stars, is truly a heart warming experience. But isn't pride simply more than watching Chelsea player Michael Essien kicking a ball into a net? Let's hope that in Atta Mills, Ghana has found its own star who tactfully pushes past his opponents with his target in sight and aims for the goal stated by Kwame Nkrumah, the country's first ever president, of making  "the party and the nation one and the same".

Don't get me wrong, Kufuor has brought positive change to Ghana. Beatrice Annan, a citizen in Ghana and supporter of his party, the National Patriotic Party (NPP) said:  "In Kufuor's time he has brought road infrastructure, introduced a national health insurance scheme that makes sure that if you're ill you have a way of getting treatment. We must not forget that in his time Ghana discovered oil." Having myself met the ex-president on his visit to London for Ghana's 50th independence, I can say that he is a humble and likeable character. But is this enough in a president while some of the country's roads remain unnamed?

It was a proud moment seeing Ghana's elections run smoothly in comparison to troubled democracy in other African countries; Nigeria's 2007 elections recorded more than 60 election-related deaths before the first vote was even cast. As the first sub-Saharan country to gain independence, in 1957, it's Ghana that has to lead the way. Another citizen of Ghana, David Basil, has argued:  "I think we have set the pace in African democracy by being one of the first countries to hand over power in succession freely."

Kufuor built himself a plush presidential palace in November 2008, as a lasting monument to his rule. What will Atta-Mills bring to 2009? I really hope Nkrumah's words come to fruition. Forwards Ever Backwards Never!

Lazy Brits are losing the fight against obesity

It's a hard life at university