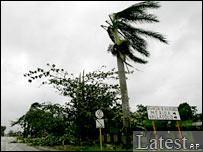 As Hurricane Dean swept through the Caribbean, Jamaicans demonstrated true Caribbean resolve and steeled themselves against its onslaught. Now less of a force, it has hit Mexico.


There was flooding brought on by the storm in Jamaica's south coast and damage to buildings, including roofs being blown off. The government of prime minister Portia Simpson Miller imposed a 48 hour curfew to prevent looting in the city centre of the capital, Kingston.

There were no reported deaths unlike in the neighbouring islands of St Lucia and Martinique. In Kingston, and several other parts of the country there were mud slides brought on by the flooding as the hurricane lashed the island with torrential rain and wind speeds up to 230km an hour.

The eye of the storm was reported be 85km to the south of the island before it moved on to the Cayman Islands, and then on to the Yucatan peninsula of Mexico, with Cancun, a popular beach resort taking a lashing.

Some Jamaican residents refused to leave their homes to seek shelter. Dazel Williams, a Trinidadian, living in Kingston said:  "I am not going anywhere. I will be staying put and carrying on as usual."

Other Jamaicans such as Bryon Thompsom, of Port Royal said:  "We are going nowhere, I will be here later in a bar, drinking some rum".

There are deaths recorded as far as Trinidad, with one man being swept out to sea. His body was discovered yesterday on the eastern shores of Mayaro. Another woman was killed after her boat crushed her against a coconut tree, following heavy wind and huge waves on the island.