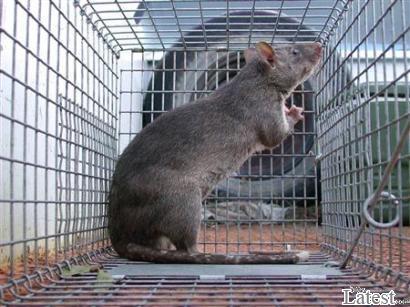 Wildlife officials in the heart of Grass Key, Florida, USA are frantically laying bait laced with poison in an attempt to wipe out a colony of huge African rats. U.S. federal and state officials are beginning the final phase of a two-year project to eradicate the Gambian pouched rats, which can grow to the size of a cat and began reproducing in the remote area about eight years ago.

"This is the only place in the United States where this is occurring," said Gary Witmer, a biologist with the U.S. Department of Agriculture's National Wildlife Research Centre in Fort Collins, Colorado. A former exotic pet breeder, living in a small house, bred the species and allowed them to escape.

If they are not killed, wildlife officials fear the rats will eventually make their way onto the Florida mainland where they might destroy fragile ecosystems. In Zimbabwe, ravenous Gambian rats are blamed for damaging nut and young pea crops.

Grassy Key is a 1,500-acre land, north of Key West at Florida's southern tip. Streets are named after limes, lemons, peaches and avocados. Like other islands in the Florida Keys, it is a contrast of inland rustic wooden cottages and multimillion-dollar waterfront mansions.

Wildlife officials are baiting 1,000 traps laid out in a grid with narrow four-inch openings. Peanut butter, almond extract and anise are the lures. Most of the rats will die quickly in underground burrows after ingesting the bait laced with toxic zinc phosphide.

"They're a big rodent. They're not particularly attractive. I don't understand why anyone would want them as a pet," Witmer said. "They're very messy animals."

The U.S. Centre for Disease Control (CDC) in Atlanta and the Food and Drug Administration have banned importation of Gambian rats since 2003. This was after an outbreak of monkey-pox ( similar but milder to humans than smallpox) that was linked to Gambian rat contact with prairie dogs in the U.S. Midwest.

The CDC hopes to study the carcasses and faecal samples of Gambian rats from Grassy Keys to learn about internal parasites, but the new pests have so far shown no signs of monkey-pox.

Can you 'Deloitte and Touche' it?