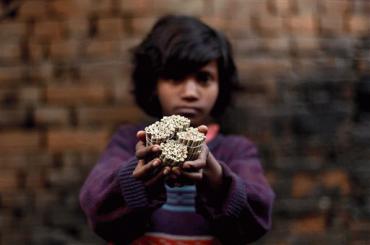 Sagira Ansari sits on a dusty sack outside her uneven brick home in this poor town in eastern India, her legs folded beneath her.

She cracks her knuckles, then rubs charcoal ash between her palms.

With the unthinking swiftness of a movement performed countless times before, she slashes a naked razor blade into a square-cut leaf to trim off the veins. She drops in flakes of tobacco, packs them with her thumbs, rolls the leaf tightly between her fingers and ties it off with two twists of a red thread.

For eight hours a day, Sagira makes bidis - thin brown cigarettes that are as central to Indian life as chai and flat bread.

Sagira is among hundreds of thousands of children toiling in the hidden corners of rural India. Many work in hazardous industries crucial to the economy: the fiery brick kilns that underpin the building industry, the pesticide-laden fields that produce its food.

Most of the children in Sagira's town of Dhuliyan in West Bengal state work in the tobacco dust to feed India's near limitless demand for bidis.

Under Indian law, this is legal.

Sagira, who has deep brown eyes and a wide smile, joined her family's bidi work when she was 7. At first she just rolled out thread for her older sisters and brother, then she helped finish off the cigarettes, pushing down the open ends. Last year, she graduated to full-scale rolling.

She is not alone. Her best friend, Amira, also rolls bidis. So do Wasima and Jaminoor and the rest of the girls in a neighbourhood that is, at its heart, a giant, open-air bidi factory.

Parents and children roll cigarettes on rooftops, in the alleyways, by the roads. One woman draped in a red shawl in the yard behind Sagira's house breast feeds her baby while rolling. Of the roughly 20,000 families in Dhuliyan, an estimated 95 percent roll bidis to survive.

Sagira is expert enough that even when distracted, her fingers continue to flit blindly through the tobacco shavings in front of her.

She says the work can make her ill, with a cold, a cough, a fever. Her head often aches. So do her fingers.

Sometimes, she takes her woven basket of tendu leaves and tobacco to the banks of the Ganges to roll in a circle with her friends. She stops every so often to splash in the river for a few moments. Then she gets back to work.

"I can't play around," she laments.

Manu Seikh, the bidi king of Sagira's neighbourhood, sits on a roadside bench. In front of him lie orderly stacks of rupee bills - tens, fifties, hundreds - large bags filled with one- and two-rupee coins and a small box holding his asthma inhaler.

He and thousands of middlemen like him are the linchpins that provide the veneer of legality to the bidi industry, insulating the powerful companies selling bidis from the families and children rolling them.

Seikh, 66, got his start in a bidi factory when he was 16, back when bidis were rolled on the factory floor. 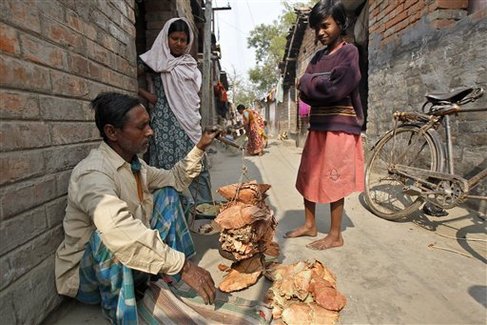 A 1986 law barred children under 14 from working with bidis and other hazardous industries, but left a huge loophole that allowed children to assist their families with work performed at home.

So now, while the tobacco is threshed, cut and blended in factories, it is then given to Seikh and other middlemen to distribute to families for rolling. The bidis are then brought back to the factory for roasting, packaging and shipping. A pack of 10 to 12 will retail for 6 rupees, or 12 cents.

The informal nature of the work makes it nearly impossible to count how many of India's 7 million bidi rollers are children, but estimates range from 250,000 to 1 million.

Every noon, adults and children carry baskets and tubs filled with bundles of bidis to Seikh's corner stall, where his men scan them for quality, reject those deemed substandard and stack the others in shallow wooden boxes. A bookkeeper makes a note in a ledger and hands over a chit for payment.

Then the rollers receive more tobacco and tendu leaves for another day's work.

Seikh blames poverty for forcing the children to work, and the government for failing to stop it.

"I am very concerned about children not going to school and losing their futures. But we are helpless," Seikh says.

In his nearby factory, Ranjan Choudhary, 37, also distances himself from blame, even as boys aged about 7 or 8 slide bidis into plastic pouches and seal them on a small stove.

Whatever the child labour laws say, he sees the industry as "a lifeline" for the people.

"It affects children, but for them to survive, this is the only industry here. There is no other source of income," he said.

"The child has every right to help the mother. As long as we don't recruit the children to roll bidis, I don't think we violate any act," said Umesh Parekh, chief executive of the All India Bidi Industry Federation.

Bidi rollers should "themselves exercise restraint" in using children, he said, adding that his trade group had no plans to fight against child labour.

"The industry is not doing anything for that. It is for the government to do," he said.

The government is re-evaluating its child labour policy, said Mrutyunjay Sarangi, India's labour secretary, but had yet to decide on any concrete action.

"We are having discussions," he said.

India has tacitly recognised this Dickensian nightmare with a recent law making education compulsory up to age 14, said Bhavna Mukhopadhya of the Voluntary Health Association of India, an aid group. "Everything has a time, and I think this is the right time to do it ... you have to ban child labour across the board, strictly," she said.

But efforts to change the labour laws are complicated by the bidi industry's clout in government. One company owner even sits in the national Cabinet.

Sagira's town was once a textile centre where her family for generations wove scarves and sarongs on hand looms.

Mired in poverty, they lived in a mud and thatch hut and could afford only a single meal a day for their 12 children. "We were starving," said Sagira's father, Mahmood Ansari.

Then the Ganges caused flooding that destroyed the family's house - and its loom.

Meanwhile, merchants from other states realised the cheap labour here would be ideal for bidi work.

Sagira's grandfather turned to bidi rolling, then her father when he turned 12.

Now, every day at 8 am, Sagira, her 17-year-old brother and sisters aged 18 and 14 begin a four-hour rolling session. They stop to bathe and have lunch, spend a few hours cutting the tendu leaves into neat squares and then roll for a few more hours.

Because of bidis, his seven children are far better off than he was, Ansari said.

The family gets 75 rupees ($1.50) for every 1,000 bidis rolled, totaling about $150 a month. That's enough for three meals a day, with a little fish or egg once a week. A few months ago, Ansari used loans to replace the home of tarps and sticks his family had lived in for two decades with an unfinished two-room house of brick and plaster with dirt floors.

But there is not much hope for Sagira's future.

She's been to school only twice in the past month; she's too busy, her mother, Alea Bibi, said. She goes only when there's a reason, when new books are being handed out or to register for the aid the government gives to bidi rollers as an incentive to educate their children.

When she does show up, she is humiliated for her absences, made to hold her ears with her elbows outstretched and repeatedly sit down and stand up. It doesn't work, yet each year she graduates to the next grade, regardless of her attendance.

She barely knows math, but can at least count to 25, the number of bidis in a finished bundle.

But at night, after the work is done, her brother, who rarely attends school himself, uses her schoolbooks to teach her to read.

She dreams of being a schoolteacher.

Far more likely, she will get faster at rolling bidis, which will improve her marriage prospects. Then, as so often happens here, her husband might stop working, and she - and eventually her own children - will become the bidi-rolling breadwinners.

Her father sees no way to break the cycle.

"We are destined to roll bidis," he said.

Exposed: Iraqi 'weapon of mass destruction' is a shoe