Chris Gelken, in Beijing, provides a weekly digest of some eye-catching editorials in the Chinese press 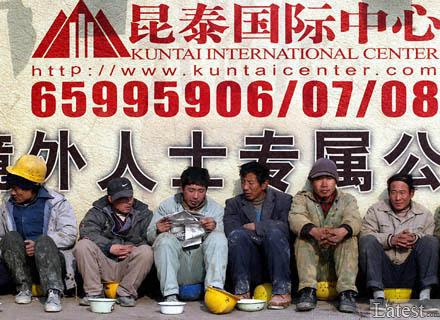 A suggestion by a local lawmaker in southern China's economic powerhouse province of Guangdong to scrap the minimum wage scheme has generated howls of protest.

To help reduce the impact of the global economic slowdown on manufacturing enterprises in the region, he floated the idea of cancelling the hard won minimum wage system for blue-collar workers.

The nationally available Worker's Daily quickly condemned the idea, and warned the public to be on the alert for any possible violations of their rights under the guise of measures designed to mitigate the effects of the financial crisis.

The paper argued that the minimum wage system has been a crucial element to guarantee the basic living standards of workers, and is necessary to promote social justice and maintain social stability.

In a market economy, the paper conceded, the government cannot directly interfere with the salary structure of individual businesses, but it can implement policies to protect the rights of workers.

The Workers Daily said it is a public responsibility to ensure that enterprises are held accountable for their actions and abide by laws introduced to protect the rights of the common worker.

The paper concluded by saying companies should show due respect to their employees, because without their support, their businesses would be unable to survive and prosper.

Over the past three years, Shanghai's first ever hotline for teenage girls with unwanted pregnancies has helped more than 2,000 youngsters, with one as young as 13-years old.

The rise in the number of teenage pregnancies in the city has once again left Chinese society stumbling for answers. An editorial published in The China Daily argued that if the country is to make any progress in reducing the number of unwanted pregnancies, parents will have to play a bigger role.

The paper says the time has passed when parents and teachers could afford to avoid discussing topics regarding sex. The paper says parents in particular need to talk openly with their children and make them aware about the dangers of unsafe and early sex.

The paper pointed out that today's younger generation is maturing at a much faster pace than before, both physically and emotionally. Unfortunately, most Chinese parents are shackled by their conservative upbringing, and not only avoid the subject whenever possible, but sometimes even deliberately offer dangerously misleading ideas to their children.

Only when parents and teachers open their minds, the paper concluded, can children get the education they need and be free of the negative effects of sexual activity.

When a 75-year old man fell through the back door of a bus in Nanjing and could not stand up by himself, it was reported that other passengers ignored his plight until he shouted,  "I fell down by myself, and nobody is to blame".

Their reluctance may be related to a widely reported incident a few years ago when a man rushed to help an elderly woman who had stumbled and fallen in a bus doorway.

The man, named Peng Yu, was later accused of knocking the woman over and was sued by her family. The court ruled that he should pay for her medical expenses.

The story attracted widespread attention and, it has been suggested, helped to create a culture of indifference to the pain and suffering of others because of the possible ramifications of becoming involved.

The Beijing News published a commentary that expressed sadness that some people in society would ignore the plight of the old man until he loudly declared that he alone was to blame for the accident.

The paper said while we live in a society that ostensibly promotes charity and good deeds, the lessons drawn from the story of Peng Yu reminds us that kind hearted people can sometimes be taken advantage of.

The article concluded by saying it is a shame that people are reluctant to lend a helping hand because they fear their only reward could be a costly court case.