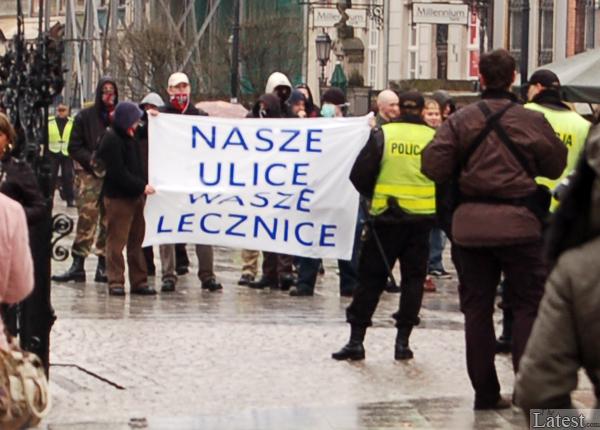 Gdansk is a city littered with cranes, and it always has been. The tall, imposing structures reveal the historical development of the city situated on Poland's Baltic coast. They also point to the cross-roads at which the former Eastern bloc country now stands.


To the north of the town Soviet-era cranes tower over the dockside. Primitive and rusting, flecks of their peeling green paint are carried into the ocean on icy winds. In the centre the wooden husks of their medieval counterparts slowly rot. To the south the shiny new construction cranes move incessantly across the skyline, building the hotels, galleries and the ever-present shopping malls that have become such a feature of the new Poland.

Once known internationally as the city of Danzig, Gdansk has always been a hub for international trade, fought over by everyone from the Teutonic Knights to the Nazis. The city is now renamed, and due to these wars irrevocably changed, but still trading on.

It's the streets this time - not the battlefields - that host the fight for municipal control of Gdansk. The city added to its long history of dissent late last century when it was home to the beginning of the Solidarity movement for independence from the Soviet Union. Solidarity, founded by the dockers and shipyard workers of Gdansk, would go on to strike the first blow that would lead to the end of Communism in eastern Europe.

The history of this struggle is etched everywhere on the Gdansk landscape. There is the monument to the 90 workers killed in the uprisings  — three towering crucifixes, with steelwork of the sacrifice embedded into their bases  — look down over the forlorn industrial areas as a grim reminder.

Along the Royal Way, spiritual home of Gdansk's tourists, stickers and t-shirts bearing the Solidarity logo can be bought in any gift shop. Since the people of Poland ended Soviet domination and repression in the 1980s, every politician, political party, pressure group, news media outlet and private company has claimed to stand for modernity.

So no surprises that the big intellectual argument in Poland at the moment is: What does modernity actually mean? All sides seem to agree it involves a free-market economy, but that's where the consensus ends.

* * * * * * * * * * * * * * * * *
International Women's Day 2007 saw a modest demonstration gather in the centre of Gdansk beneath the copper-green spire of what is possibly the world's most awe-inspiring post office. Seemingly comprised mostly of students, there was also the odd university professor-like character and a few old radicals there too. One dreadlocked Pole beat a huge steel drum as the crowd chanted slogans calling for  — among other things  — equal pay for women, abortion rights and equality for homosexuals. A few policemen walked around apparently unconcerned, nonchalantly swinging their truncheons as they paced.

Martyna Stakoiuska, a Scandinavian Studies student at Gdansk university, was clear as to why she had come out to protest.  "I'm here because I believe in freedom," she said, nervously looking over my shoulder as she spoke.  "Why shouldn't I get paid the same amount of money for doing the same job as a man?"

Pertinent comments, but spoken with a wavering conviction. As she paused I turned around to see what had so quickly averted her attention from the interview. At the other end of the Royal Way, a counter demonstration was making its way towards us, their chants growing louder all the time.
They stopped about a 150 metre away to size us up.

The group, about 30 strong, was comprised of neo-Nazi stereotypes that would have been amusing had they not been so close. Scarves covered the bottom halves of their hooded faces, powerful looking jackboots reached halfway up their calves and the uniform was completed with bomber jackets and camouflage trousers. The ones at the centre held up a sign in Polish saying  "OUR STREETS  — YOUR HOSPITALS", and as they realised the relative weakness of the Women's Day demonstration, their chants began again with renewed confidence.

Being a naÃ¯ve Brit abroad I took this for a simple counter-demonstration and tried to continue the interview, although by now Martyna was in no mood to answer my abstract questions on Poland's social development. She said:  "Whenever we try and do anything for an oppressed minority the Nazi's come out" she said as she tried to locate her friends among the crowd. The atmosphere had completely soured now and everyone, young and old, began looking for an escape route.

I still believed the police would protect us. Martyna was joined by a friend clearly anxious to leave as she continued talking, almost to herself:  "They normally throw eggs and stones, maybe they're too far away now." As soon as she stopped speaking the first egg cracked on the cobbles about 30cm from my foot. This was the signal for a quick exodus.

Everyone turned and began walking briskly up the street, looking over their shoulders with every step. The neo-Nazi's followed, totally unhindered by the the police. As they increased their pace so did we, dodging eggs as we went.

All of a sudden a something hit the drum of the student with dreadlocks with a harsh clang. As if it were a well know alarm the crowd simultaneously broke into a run, and I immediately lost Martyna in the crowd. A quick look behind me showed our pursuers clearly enjoying themselves, chanting with ever more vigour, some waving their fists in the air, others taking aim.

At the first opportunity the demonstration I had somehow become a part of scattered down side streets, into bars, shops, some protesters even jumped into taxis. The neo-Nazis slowed down as they shook hands and laughed with one another over their achievement. Police officers in a near-by van looked as uninterested. They did not protect us.

I took the opportunity to go to a pub and reflect on what just occurred with a fine Polish lager. The pub was called The Ghost and the dÃ©cor created an atmosphere worthy of the name. Death masks with tortured expressions - some with candles in their open mouths - protruded from the paint splattered walls, next to fading pictures of old, long-dead sailors. 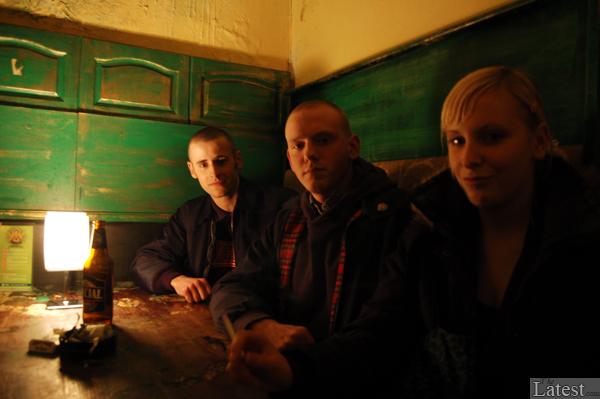 I walked down the stairs to find the underground seating area packed with the kind of skinheads from whom I'd just escaped. As I sat and quietly supped I realised these people were pretty young, some perhaps only 16 or 17 years old, but all of them were dressed in the regulation uniform of the Nazi thug.

I asked if I could have an interview in my best Polish. No response. I asked again in English, complete with profuse apologies. One girl replied:  "No." in a mock English accent and the group exploded with laughter. I returned to my seat.

About 20 minutes later a male member of the group sat down at my table, clearly feeling more friendly after a few drinks and said:  "Now I speak English." Seeing what was happening his friend joined us and I started by regaling them with the story of stones and eggs.  "Gay is not okay." said the ring-leader, who I later learned was named Jerzy Kowalski,

"I do not accept the marriage of the man and the man" When asked if they supported the Neo-Nazis in breaking up the demo, the reply was immediate.  " Of Course" said Jerzy,  "Feminism is bad because feminists have a socialist ideology, they accept abortion and treat men like... like". Just as he paused his friend, Jacek Kuziemski, jumped in and finished his sentence.  "Like animals."

So far so predictable. Their textbook sexism and homophobia was allowing me to pigeon-hole them as boneheads, deserving of any harsh judgement I fancied making.Throughout the meeting their friends form the table came over in turns, most of them girls. Some tried to speak English, while other questioned Jerzy and Jacek in Polish as to just what the hell was going on. The prettiest one stole my notebook and ran round the corner, only coming back when one page of notes was covered by a cartoon of an ejaculating penis. I was swiftly learning that looks can be deceiving in so many ways.

As the interview went on despite my numerous attempts to try and wrap things up I realised I'd been deceived by these two young men's appearance too. Jackboots and bomber jackets aside, they spoke eloquently for ages about Polish history, the triumphs and humiliations of its past and the evils of socialism. After I tried to argue with Jerzy's proclamation that the EU was a  "second USSR", things became very serious as their voices were lowered and their eyes stared menacingly into mine.  "In England what do you know of Bolshevism?" said Jerzy,  "We had Bolshevism here for 50 years. It causes economic stagnation and mental disability. You in England know nothing about it."

Wishing to turn the conversation away from myself and things that I knew nothing of before it became a physical problem, I asked if they were democrats. Laughter ensued.  "I believe in autocracy" said Jerzy, before being interrupted by Jacek. The previously silent one seemed incensed by the mention of democracy and instantly became animated.  "Politicians are lazy and only concerned with their own interests" he spat out.  "We need an authoritarian leaderto sort out the problems caused by politicians". He said the word  "politicians" like it was making him sick.

The interview then degenerated into tales of Marshall Pilsudski - righteous slayer of communist armies and, according to them, a flawless authoritarian ruler - and their own ancestors who apparently fought as the footsoldiers of their military dictator-hero in the 1920s.

As I made my excuses, got a few hurried photos, buried my notebook in my bag and made off swiftly  — but not too quickly  — for the door, Jerzy said something to me that changed the whole colour of our meeting. After giving my hand a firm shake he said:  "We're not Nazis. We're not racists. We just want Poland to stand up on its own two feet, away from the EU and the socialists. And we will stand up."

* * * * * * * * * * * * * * * * * * * * * *
The battle in the streets and in the pubs of Gdansk that weekend was caused by two very differing ideas of modernity. The liberal students demonstrating for equality see Poland's future as a secular, western democracy, fully embracing the tolerance enshrined in documents like the EU charter of Human Rights.

And then there were the sexist, homophobic thugs of the counter-demonstration who dream of Poland becoming a powerful and proud sovereign nation, answerable to no one and able once again to defend its own borders from invaders. They see any acceptance of social equality as creeping socialism and a return to the bad old days of Soviet repression, while the students see this equality as the cornerstone of the western enlightenment ideals they admire.

With Poland swinging from nationalist to centrist governments at almost every election since the fall of the Berlin wall, this battle of ideas is clearly raging across the country. Whichever side wins out will shape the future of this proud and ancient nation.