Straight ahead I can see Alexander Armstrong and Ben Miller. They are standing absolutely still and, in a neat twist to the usual cliché, they both seem to be much taller than they are on the television.

It’s Saturday night in Birmingham. It’s a Saturday night in London, Edinburgh, and some parts of Norfolk too, but I won’t go on about it. I have been sitting in my seat for at least ten minutes and still Armstrong and Miller have not moved an inch.

The venue is the Alexandra Theatre. This is the third show in Armstrong and Miller’s three-night Birmingham run. And the representations of Mr Miller and Mr Armstrong in front of me are the result of a projection onto the stage curtain.

All of which would go some way towards explaining why they seem so much taller than they do on the goggle-box and why they have been able to stand perfectly still for an inordinately long period of time.

But hang on just a minute: I’m sure Armstrong just moved. Not much, just very slightly, imperceptibly perhaps – but I’m sure he wobbled forward. Or maybe I’m going mad.

I think nothing of it and continue to wait. In the two minutes before the curtain rises it all becomes clear. Intermittently one of the performers moves to scratch his head, look at his watch, rub his eyes … and then returns to his previously inert position, as if nothing has happened.

The ex-Cambridge double-act is already larking about; despite not having made an entrance yet. It also seems that I’ve devoted 272 words of a show review to describing the pre-match festivities, which might, to some, seem a waste of good pixels.

But they would be wrong to reach that conclusion. Those pixels have not been wasted – there is a point. Armstrong and Miller are masters of the tiny details. Even the preamble is funny. This is comedy as it should be. Every last detail is funny.

It is for this attention to detail that they earned a BAFTA for their BBC television series in June of this year.

Armstrong and Miller are class masters when it comes to sketch performance, not to mention both being fine actors.  They have a knack of being original, witty and surreal. Best of all, they have a knack for being silly in quite a spectacular way. 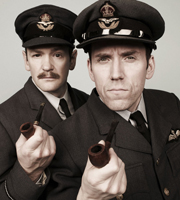 The show opens to rapturous applause, as the "chav" airmen parachute to safety, contemplating the perils of spending time in Walsall “and shit”. Moments later a be-suited Armstrong and Miller reappear to greet the audience. It’s all very informal and the audience are thrilled.

The sketches follow in rapid succession – each one funnier than sketch before. Highlights include a food-fight with the audience, a dental sketch involving a member of the audience, a guide to theatre etiquette and the reappearances of the airmen in different situations.

Katherine Jakeways, a stalwart from the recent television series, is the only other cast member and deserves more than a passing mention. She plays a bewildering number of support roles and does a remarkable job on stage during Armstrong and Miller’s many costume changes.

Carol Cleveland’s role in the Monty Python stage-show ensemble is the obvious parallel. Armstrong and Miller are following the same rule of thumb: any character that has to be a three dimensional, convincing female – such as a girlfriend or wife - has to be played by Jakeways. The two dimensional, cartoon, exaggerated versions – or Pepperpots, as the Monty Python team nicknamed them - are played by the men.

But the real gem is yet to come. The lights come up on a bearded, wheelchair-bound man and his bespectacled companion sat at the piano. At first glance it appears that Michael Flanders and Donald Swann have been brought back from the dead for performance purposes.

Brabbins and Fyffe are the filthier, ruder versions of 50’s and 60’s double-act Flanders & Swann. But this is parody borne out of respect and admiration: in fact, this is more a homage; Armstrong and Miller providing a nod to their music-hall heroes.

This is the closing sketch of the first act; the most important to get right. Every act has to end on a high. But, as the duo sing the first verse of their song, it becomes clear Brabbins and Fyffe are firm favourites.

The backdrop soon reveals the lyrics to the song. It is audience-participation time.

Again, there are echoes of Monty Python here. My VHS copy of the1982 Hollywood Bowl show has all but disintegrated now but the memory of Eric Idle and Michael Palin revealing the lyrics to The Philosopher’s / Bruces’ Song and conducting the audience sing-a-long is firmly etched on my mind.

And so it is that a couple of minutes later, through roaring laughter, the audience are to be found singing obscene lyrics at the top of their voices, crying through their tears all the while.

There is nothing quite like seeing a middle-class audience singing borderline obscene lyrics in a theatre-setting. It warms the soul.

The interval provides respite from the frivolity. A twenty minute break is necessary to ensure that nobody pulls a muscle, or involuntarily loses control of their bodily functions as a direct result of sustained mirth.

Armstrong and Miller are facing the other way on the curtain projection during the interval, occasionally twitching, yawning, or checking the time.

The second-half picks up where the first left off, adding in a superb Blue Peter sketch, adapted from the Tv series, and culminating in a rip-roaring finale featuring everyone’s favourite airmen.

After two hours of entertainment the curtain comes down. The show is over. Judging from the deafening noise coming from the audience as they clap their appreciation, this is one show that will be remembered for a long time.

* James Combes's review is of the Armstrong and Miller performance on October 2, 2010. Their tour continues until November 27 and tickets can be found at http://www.mickperrin.com/tours/view/22.

Striking while the iron's hot