Heart-rending cries of grief and disbelief greeted the UK jury verdict tonight that a 29-year-old unarmed Black man was "lawfully" killed by police who shot him dead.

Family and supporters of Mark Duggan shouted "rubbish", "the police are murderers" and "a Black life ain't worth nothing" after the inquest jury gave its conclusion by a split eight-to-two majority. But, by the same majority, the three women and seven men gave a damning ruling that Duggan did not have a weapon in his hands when police ambushed him as he travelled in a minicab at Tottenham Hale, north London, in August 2011.

The Black community in the area where the incident took place viewed the death as an "execution" and days of riots happened soon afterwards - the worst ever witnessed in England - that spread throughout the country.

By a majority, the jury also concluded Duggan "threw" the gun from the silver-coloured people carrier when armed officers forced it to stop. The cab driver told the inquest at London's historic Royal Courts of Justice that the armed officer, known only as V53, who pumped two bullets into Duggan's arm and chest looked crazed and out of control. Another witness said Duggan looked like he was surrendering to the police, with just a mobile phone in his hand.

Duggan's mother, Pam, collapsed in court on hearing the finding. Later in the evening she told The Guardian: "There are so many questions that have still not been answered. Why did the police pull the trigger twice on my son, why did they shoot him at all, why did they move the cab, how did the gun end up on the grass when no witness saw Mark throw a gun there and why were there so many police after my son – 31 of them?"

Shaun Hall, Duggan's brother, with tears in his eyes, said: "It's unbelievable. That's just about what I can say for now."

Aunt Carole Duggan insisted "the majority of people in this country know Mark was executed" and pledged "no justice, no peace", while the family's lawyer Marcia Willis Stewart said they were in a state of shock, could not believe the outcome and their view was that Duggan had been "murdered" by the police. Carole Duggan said: "On 4 August 2011 an unarmed man was shot down in Tottenham. Today we have had what we can only call a perverse judgment. The jury found that he had no gun in his hand and yet he was gunned down. For us that's an unlawful killing."

She went on: "The family are in a state of shock and we would ask that you respect their shock. They can't believe that this has been the outcome. No gun in his hand and yet he was killed – murdered as they have said, no gun in his hand. We are going to fight until we have no breath left in our body for Mark, his children and all the others who have died in police custody."

Armed police intercepted Duggan in an operation based on intelligence that he was part of a gang and had collected a gun. He was being followed by marksmen who believed he planned to pick up a gun from another man, Kevin Hutchinson-Foster, and then move on to Broadwater Farm, also in Tottenham.

The jury slammed the police for not doing enough to gather and react to intelligence about the possibility of Duggan collecting a gun from Hutchinson-Foster, who was jailed last year for handling the hand gun. 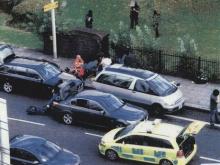 But they found that the car had been stopped in a location and in a way that "minimised to the greatest extent possible recourse to lethal force".

Leading Tottenham activist Stafford Scott commented: "The headlines declared him [Duggan] a gangster who was on a mission to avenge the killing of his cousin, Kelvin Easton. However, during the inquest no evidence was offered in support of this claim. It was further alleged that he was a large-scale drugs dealer, but yet again not a shred of evidence was provided to substantiate these allegations. But that did not matter, the mud had been slung and it clearly stuck as it was designed to.

Exploding the biggest myth, Scott said: "Even now most people still do not realise that he was only ever convicted for two relatively minor offences – one count of cannabis possession, and one count of receiving stolen goods."

He concluded: "This verdict will have a long-lasting and negative impact on police and community relations. Tottenham's black community will not view this judgment in isolation. For us, a lack of justice has become par for the course; Duggan's name now joins those of Cynthia Jarrett, Joy Gardner and Roger Sylvester who have all died at the hands of the police and have not received anything that resembles justice." 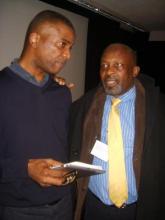 Within minutes of the verdict, The Black Community Network's Facebook group page was alight with comments condemning it.

Daniel Stam said: "That's not rite! but to be expected with those guys [the police] the Biggest Gang out here. The police are a gang made to enforce the laws made by another gang [the Establishment] that has no love for ethnic people..so as ethnic people we should really organize whatever our culture, organize & educate each other before it's too late..but i should really say that it is never to late for us to empower ourselves..it's God given rite!!"

Michaela Nonya commented: "Hmm but if the police happened to be some other gang then they would have all gone down as well as their friends who weren't there under joint enterprise."

Yvonne Dot Wan Thorne said: "Police were originally formed to uphold the peace not enforce laws. It is said (quote) ‘The development of modern policing and the evolution of a policed society are of fundamental importance to an understanding of the society in which we live." 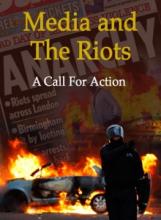 Recently retired ex-Met police Superintendent Leroy Logan, former Chair of the Black Police Association, posted on his Facebook page: "Has this verdict given police licence to make fatal mistakes & get away with it? Change has got to come."

Respect MP George Galloway, who resigned from the Labour party over its support for the invasion of Iraq, was forthright in his codemnation of the inquest verdict.

He said: "It is simply a logical impossibility for a jury to conclude that a man (Mark Duggan) was simultaneously unarmed and yet shot dead lawfully by armed police officers. This is a dangerous, scandalous outcome which leaves police and justice system credibility in tatters amongst an already restless London population. Mark Duggan was executed by the police, there is no gainsaying that."

Galloway added: "That his death is one amongst many unprosecuted deaths of Black men in England at the hands of the police and gaolers cannot be denied either."

* The-Latest 's Media and the Riots - A Call to Action conference report demolished a news media-spread police lie that Duggan was involved in a shoot-out with officers when he was killed.