Chelsea football star Callum Hudson-Odoi, the first British Premier League player to get Covid-19, was spotted by The-Latest buying things for his home at a B&Q mega store on the first day it opened since shutting down a month ago because of the crisis. 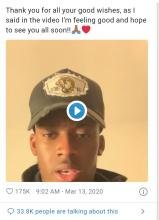 ested positive for the killer virus in March but fully recovered later that month. Callum Hudson-Odoi's illness, followed by Arsenal manager Mikel Arteta also testing positive for the virus, sparked the shutting down of the league. Hudson-Odoi had relatively minor symptoms but went into self-isolation along with his team-mates and the club's staff. The player used social media to reassure supporters in a video he was recovering well. In a Facebook post on March 13, pictured right, he said: "Thank you all for your good wishes, as I said in the video I'm feeling good and hope to see you all soon!! Hudson-Odoi put hands in prayer and red love heart emojis at the end of it. The post quickly got almost 34,000 people listed as talking about it. 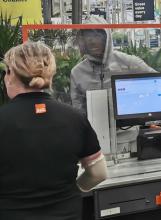 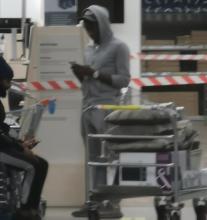 Hudson-Odoi went early evening shopping yesterday with a male friend who piled up his buys of office chairs, a microwave, fluffy cushions, plastic laundry baskets and electrical accessories onto a trolley. After paying at the check-out, the pal then loaded the goods into the back of Hudson-Odoi's Range Rover, while the player got into his sleek brand new black Bentley. Sporting grey track suit bottoms, a matching hoodie, trainers and a baseball cap, Hudson-Odoi's only display of his huge wealth as a teenager were a diamond encrusted watch and similar ring he wore.

At one point, a group of excited customers and staff gathered around him in a shopping aisle, breaking social distancing rules. 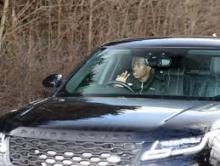 Dave Robson, a Chelsea fan, said: "Of course I think the world of Callum. He's one of our brightest stars and is probably going stir crazy on lock down at home. But why didn't he give his friend a list of what he wanted rather than going to the store himself? He must have known that, because of his celebrity status, he'd be a massive magnet and people would break social distancing to talk to him and give their support." 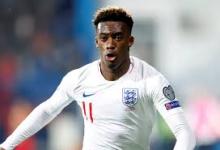 ssistant at the Purley Way, Croydon, branch of B&Q told The-Latest: "Before the corona virus emergency Callum used to come here sometimes but we haven't seen him for a while. It really, really cheered us all up to have a celebrity in the store after the the misery of the lockdown. Callum was chatty and joked around with his friend. He's really down to earth."

There were 70 customers in the vast store, allowed in no more than two at a time, each one asked by staff to keep a safe two-metre distance apart.

Hudson-Odoi became the youngest-ever player to make a competitive start for the England national team when he was capped for the UEFA Euro 2020 qualifier match win over the Czech Republic last year. He starred in the World Cup-winning  England Under-17 side. Hudson-Odoi is reported to be paid £120,000 a week by Chelsea, which will earn him a staggering £31m over the course of his five year contract. When he signed, he was quoted as saying, on the club's official website: "I've been a Chelsea player since the age of eight and this is the right club for me to be at. "

He added: "I want to lift as many trophies as possible, win as many games as possible and contribute to as many goals I can as well." 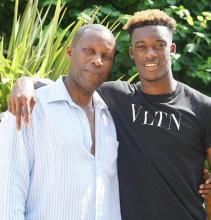 Hudson-Odoi, whose Ghanaian father Bismark Odoi, pictured left, was a useful football player in his day, grew up in Wandsworth, south London. A younger brother went to the expensive Whitgift public school in Croydon, where the family now live.