International watchdog group Reporters Without Borders has released its annual report on which countries restrict access to the internet through censorship and surveillance.

America and the UK achieved the dubious honour of being branded “Enemies of the Internet” for the first time.

Repeat offenders China and North Korea made the list again this year, but the democracies of America and Britain joined the ranks thanks to the National Security Agency and the Government Security Headquarters’ activities, respectively.

Another democratic newcomer to the group? India, for its Centre for Development of Telematics.

“The mass surveillance methods employed in these three countries, many of them exposed by NSA whistleblower Edward Snowden, are all the more intolerable because they will be used and indeed are already being used by authoritarians countries such as Iran, China, Turkmenistan, Saudi Arabia and Bahrain to justify their own violations of freedom of information,” the group wrote in its report.

Reporters Without Borders also known as Reporters Sans Frontières, is an NGO (Non-Governmental Organisation) based in France that promotes and defends freedom of information and freedom of the press. The group has consultant status at the United Nations.

The report’s authors slammed America’s “highly secretive” National Security Agency (NSA), which they said has “come to symbolise the abuses by the world’s intelligence agencies.”

NSA whistleblower Edward Snowden revealed a government surveillance program in his leak of classified documents last June that included the mass data collection of the phone and internet records of millions of Americans. 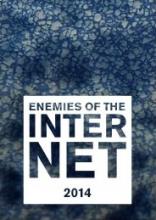 Through a close relationship with service providers like AT&T, Level 3 and Verizon, the NSA can monitor the web “at the infrastructure level” both in the US and outside, according to the report.

The report dubbed the UK the “world champion of surveillance” thanks to British eavesdropping agency Government Communications Headquarters (GCHQ).

“As part of its project ‘Mastering the Internet,’ GCHQ has developed the world’s biggest data monitoring system,” the report said. “Supported by the NSA and with the prospect of sharing data, the British agency brushed aside all legal obstacles and embarked on mass surveillance of nearly a quarter of the world’s communications.”

Snowden said last June that the UK was “worse than the US” when it came to digital spying.

India remained largely silent in the wave of condemnation that followed Snowden’s revelations about NSA surveillance.

According to the report’s authors, it had reason to.

India’s “extensive” surveillance system has only expanded since the Mumbai attacks in 2008, allowing the government “direct, unlimited and real-time access to a wide variety of electronic communications without relying on internet service providers.”

The report claimed that China’s “Electronic Great Wall” is only getting taller.

The government not only blocks website content, but also monitors the internet access of individuals in one of the most regulated online environments in the world.

It also continues to be the world’s biggest prison for netizens.

At least 70 online information providers are currently serving time for their internet activities, including Nobel Peace laureate Liu Xiaobo. Around 30 of the journalists currently in jail were convicted for what they posted online, according to the report.

“North Korea is one of the few countries where censorship can be judged by what is seen online, rather than what is missing,” Reporters without Borders wrote.

Only 2 million of the hermit country’s 24.7 million people have access to computers, let alone the internet.

The country also has units like Group 109 and Department 27, dedicated to tracking down digital devices brought in from outside the country.

Russia’s extensive surveillance program known as SORM has been in the works since the mid-1980s, and expanded to include the internet in 1998.

Since then, the country has adopted “dangerous legislation” that controls the dissemination of news and information online, according to the report.

A 2012 law allows authorities to compile a “blacklist” of websites that allegedly contain “pornography or extremist ideas, or promoting suicide or the use of drugs.”

At the time, critics of the legislation said it was designed to suppress political activism and dissent.

The list of criteria used to block websites has only grown in the years since.

Journalists, bloggers and other netizens are also frequently subject to government harassment, particularly if they post about “sensitive subjects” in the public interest, according to the report.

Just days before a referendum was planned for the Crimean region of Ukraine this month, Russian authorities blocked a number of independent news sites.

Since Syria’s civil war broke out in 2011, the country has clamped down on all means of communication, including the internet.

Telecom infrastructure in Syria is essentially controlled by three companies - the Syrian Telecommunications Establishment (STE), the Syrian Computer Society (SCS) and Syriatel - which remain under the firm control of the Assad family and regime.

The report accused these companies of reducing internet capacity to limit access to news and images of protests and the government’s subsequent crackdown.

At one point, the Syrian government was blamed for a nationwide shutdown of the internet in November 2012.

Syria’s minister of information denied culpability and blamed “terrorists” for the blackout.

Internet censorship, cyber attacks and the imprisonment of internet users are “common practice” in Iran, according to the report.

In 2012, the country formed the Supreme Council for Cyber-Space to “protect Iranians from internet dangers.”

The Working Group for Identifying Criminal Content carries out the council’s orders, and has ordered the temporary or permanent closure of hundreds of news sites since its creation.

The country’s main internet service provider is owned by the Revolutionary Guards.

Iranian authorities have been working for years to establish a national internet network not connected to the World Wide Web, also referred to as the “Halal Internet.”