The dark side of Lady Gaga 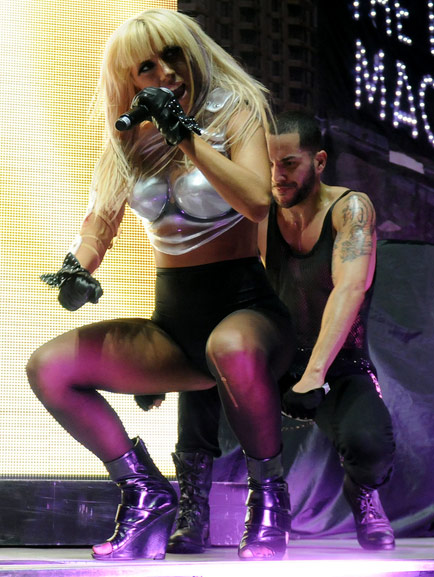 American pop songstress Lady Gaga aka Stefani Joanne Angelina Germanotta went to the top of the music charts with her debute album The Fame which sold over 10 million copies worldwide.

And as if that wasn't enough, she bagged 3 gongs at this years Brit Awards, including best International Female and Album.

On her Monster Ball arena tour last month, Gaga self-styled her performance as the “first ever electro-opera” and “the greatest post-apocalyptic house party that you’ve ever been to”

Judging from all her rabid fans, the ones tricked up in Gaga make-up and outfits, the show was a brazen approval of her eccentricity.

It opened with Gaga silhouetted behind a screen that fell to reveal her  purple leotard that showed most of her buttocks.

She definitely caught her fan's attention who she admirably called " my lovely fucked up fans who are fucked up like me."

Gaga's announcements added darkness to the pantomime show with images projected on the screens of her eating a bloody heart, smoking a cigarette in a gimp mask and handcuffed on a chair with an assortment of men, reflecting a masochistic attitude.

The unsettling and confusing mix of aggressive images that appeared like a flashback of memories in a person’s most disturbing moments were fused with upbeat electro music in the background.

Gaga announced: “I hate the truth, I’d rather be fed bullshit everyday than know the truth.”

On the Jonathan Ross Tv chat show this week she stated that she prefers to be called Gaga. Indeed she does make her fans go gaga on absolutely nothing but a superfluous costume and a display of constant Sapphic tendencies.

Her name Gaga is in fact synonymous with being mentally confused, extremely absorbed and infatuated. She drives her fans to be like this and more.

In "gaga world", it seems a blessing to be eccentric and  "a freak bitch" which she calls herself in most of her clips.

Her ridicule of Jesus and the whole conception of belief is another ideology Gaga subliminally projects throughout her performances and lyrics.

Mesmerising her fans and winning them over by playing on their weak points she said:"I see them every night and they are so beautiful and precious and lovely, but some of them are insecure and very troubled and not confident,"

She added:"I meet them and they cry, and they say 'Gaga you make me feel like I belong.'

It has been reported that Gaga is heading a campaign to raise awareness about HIV and Aids and has apparently warned her fans to practice safe sex. Yet on stage she has advertised sex, drugs, liquor and alcohol which further adds to the contradictions in her personality and fame.

In the past she confessed:“I just sleep with the guys in the band all the time because it’s easier,” and compared making music to having “mindblowing, irresponsible, condomless sex with whatever idea you’re writing about at the time".

It is difficult to understand the attraction of her superficial extravagance and fanatical routine of debasing the values and symbols of religion that many hold dear. It is shameful that she has gained so much attention with antics that should never be applauded.

1 Response to "The dark side of Lady Gaga"