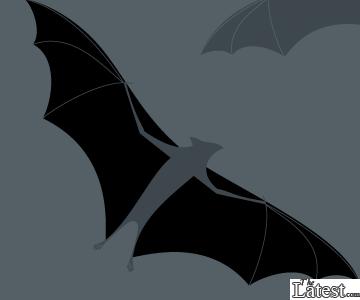 As dusk settles over the forest, the mosquitoes start swarming in force. Scott Darling, a biologist with the Vermont Fish and Wildlife Department, unfurls a net across a wide path. Not five minutes later, the first bat of the night lands in the net with a sudden thwoomp.

The tiny winged creature bares its pointy teeth and begins to chirp, the angry staccato squeaks ringing out like Morse code.

Darling uses the dull point of a pencil to gently pry the net away from the entangled bat. Later, he will examine the bat for signs of disease, weigh it (seven grams, slightly more than a pair of pennies), tag it and set it free. Then he'll discard his latex gloves, slather hand sanitiser on his skin and disinfect his equipment, even dousing the pencil he used to free the bat from the net. This last bit - the latex gloves, the disinfectant -- is still a new practice, a cautionary protocol courtesy of white-nose syndrome (WNS), a mysterious new illness causing bats in the Northeast to waste away as they hibernate.

Biologists named the syndrome for the unusual white fungus growing on the muzzles and bodies of many of the dead and dying bats. But most bat biologists believe the fungus is a symptom of WNS rather than the cause -- an opportunistic infection running amok in an already weakened bat. What's behind the deaths? Scientists don't know exactly, but they know the condition's deadly. Indeed, it looks as though WNS is to bats what colony collapse disorder is to bees, another baffling lethal syndrome.

"This is the worst crisis I've ever seen," says Merlin Tuttle, founder and president of Bat Conservation International. "I think anytime you have animals as ecologically essential, and as distantly related, as bees and bats dying en masse, it should send a canary-in-the-coal-mine signal."

Bat experts are working hard to decipher that signal. So far, they have more questions than answers. More than a few wildlife biologists have raised concerns that the bat deaths may stem from the way humans are treating our shared habitat. They are taking a close look at the impacts of pesticides, pollutants and possibly even climate change on the miniature mammals. "Bats are very good at living in high-stress environments," says Elizabeth Buckles, a wildlife pathologist at Cornell University College of Medicine. "But they've reached some kind of threshold where they can't adapt anymore."

Insect-eating bats fluttered around North America for millions of years before humans appeared on the scene. The winged mammals don't get the love that birds and bunnies do, but they fill a crucial environmental niche. A bat can eat half its weight in insects every night; if the female bat is lactating, it swallows twice that.

Bats have three favorite food groups: flies, moths and beetles. Mosquitoes (a member of the fly family) carry disease like West Nile virus, which has killed hundreds of species of birds in the United States and infected some humans, too. Many moths and beetles, and particularly their larvae, are serious agricultural pests that can destroy crops from apples to zucchinis.

"Bats are major ecological role players," says Tuttle. "They keep vast numbers of insects in check -- insects that cost farmers and foresters billions of dollars in losses every year."

The first signs that bats were in trouble showed up in New York two winters ago. The animals normally spend the winter months tucked inside caves and mines known as hibernacula. During routine surveys in 2007, staff from the New York State Department of Environmental Conservation discovered unusually large numbers of dead and dying bats lying in the snow outside the caves. The bats were thin, and many had an unusual white fungus growing on their faces. "It was very obvious to me that this was something new," says Al Hicks, the mammal specialist at the department who sent out the first warning cry.

By this winter, the mysterious malady had spread beyond New York to Vermont, Massachusetts, Connecticut and, most likely, Pennsylvania. Tens of thousands of bats perished. In the New York caves where WNS was first identified, 80 to 100 percent of the hibernating bats were lost. Of the six species that hibernate in colonies in the Northeast, WNS has struck five, including the federally endangered Indiana bat. The sixth species in the area, the big brown bat, is on the "suspicious" list.

It's all too easy to identify an afflicted cave, says Hicks. The ground outside the entrance is often littered with dead bats, and the white fungus is visible on many, though not all, of the animals. The bats are also extremely thin. They awaken and leave the caves months ahead of schedule, apparently because they lack the necessary fat stores to sustain them through their winter slumber. "The animals that have been recovered have been devoid of fat reserves," Hicks says. "They're starving to death."

Cracking the mystery is proving particularly challenging because scientists know so little about healthy bats. "We haven't known much about basic bat biology before this," Darling says. "That is science's little secret: We really don't know a lot of what people think we know, or what people think we should know."

Back in the woods, Darling identifies his squirming catch as a male little brown bat, the most common species in the area, and the hardest hit by WNS. "This bat looks pretty healthy," he says, sounding pleased and somewhat surprised. Just then, he gets a call on his cellphone. His colleagues at another site down the road report they've already snared 10 bats, so he sends me over to take a look.

When I arrive I meet up with Kristen Brissee, an enthusiastic wildlife technician in her mid-20s. She's removing bats from cotton storage bags strung up along the back of the Fish and Wildlife truck. She checks their body condition and attaches tiny metal I.D. tags to their wings. She gently spreads the wings of an Indiana bat and points out small white spots indicating scar tissue on the wing membrane. Another bat has several small holes in its wing.

Scientists suspect this wing damage is somehow connected to WNS. Some have theorized it may be caused by cold exposure when bats leave the caves prematurely and encounter icy winter temperatures. Others suggest the damage is caused by the fungus itself. Early studies turned up many different kinds of fungi growing on the bats, suggesting they were secondary infections thriving on already compromised bats. Recently, though, a common fungus species has been isolated from the sick bats. Ward Stone, a wildlife pathologist at New York's Department of Environmental Conservation, is growing the fungus in his lab. It seems to thrive in cold environments, like the chilly caves where bats spend the winters. "We think it's a brand-new species," he says.

Stone is working to put a name on the fungus and learn more about its biochemistry. The white stuff seems only to infect the surface of the bats' skin. So far, Stone hasn't found evidence that the fungus is infecting the bats internally. Nor has Buckles, who is also working to characterise the fungus at her Cornell pathology lab. Some investigators have suggested it may be an itchy irritant that prompts bats to wake up and groom themselves when they should instead be hanging around in a state of suspended animation. Yet that hypothesis doesn't fully explain the dramatic loss of fat reserves in the animals.

One possible explanation for the skinny bats is simply that they're entering hibernation in poor shape in the fall, without the fat they need to get through the long Northeastern winter. Perhaps there's a problem with their insect prey base, or an illness preventing them from putting on weight. "The other alternative is that they're coming in fat and happy, but something is happening while they're hibernating that causes them to burn up their fat reserves really quickly," Hicks says.

To Stone, that "something" is people. "We are involved - oh, yes, we are involved," he says. Human-induced climate change is at the top of his suspect list.