Death of His Tremendousness Giorgio Carbone 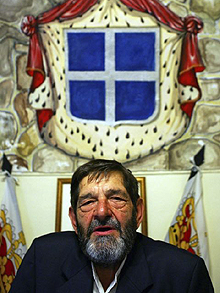 He was the Ruritania-type ruler of the smallest country in the world but managed to get the place officially recognised by 20 other nations.

Giorgio Carbone, who died on November 25 aged 73, was the elected prince of Seborga, a self-proclaimed principality on the Italian Riviera.

Carbone claimed the sovereignty of Seborga (pop. 364) from the Italian government in 1963 and took the title His Tremendousness. A former flower-grower, he produced documents from the Vatican archives to prove that the village was never the property of the House of Savoy and therefore not part of the Kingdom of Italy after 1861. He insisted that Seborga had been a sovereign state since 954, a principality from 1079, and minted its own coins after 1666.

The villagers of Seborga, which lies near the picturesque Ligurian town of Bordighera, were enchanted by Carbone's quirkiness and he won 304 of a possible 308 votes to represent them. He was re-elected in 1995.

As His Highness Giorgio I, Prince of Seborga, Carbone did not draw a salary, but he could help himself to cheese and ham from the village shop without paying.

He was born in 1936, the son of local flower grower who followed his father into the trade. His grand plans for the principality involved a cabinet of 15 ministers, a dozen members of parliament, and minting a currency, the Luigino. Citizens continued to pay their taxes to the Italian government, however, using the lira and today the euro.

Seborga has its own flag, a white cross on a blue background, a patron saint, St Bernard, and a Latin motto: Sub Umbra Sede (Sit in the shade).

Carbone managed to convince around 20 states to recognise Seborga. "The first state to step forward and recognise us was one of those revolutionary ones: Burkina Faso," he said. Consular representation was maintained in 10 countries.

Seen widely as a ploy to attract tourists, the principality was never taken seriously by the Italian government, prompting Carbone's determination to create a social security network that would allow Seborga to be fully detached. He told reporters that he was in negotiations with large insurance companies but little progress was made.

Perhaps tiring of his role, Carbone announced in January 2006 that he would retire upon reaching the age of 70. But a challenge to his authority a few months later appeared to re-energise him.

A woman calling herself Princess Yasmine von Hohenstaufen Anjou Plantagenet wrote to the newly-elected Italian president, Giorgio Napolitano, claiming that she was the true heir to Seborga's throne and offering to hand it over to Italy. Carbone gruffly dismissed her claim, voicing doubts over her lineage: "I have never seen her," he said. "We call her the internet princess".

He leaves no heirs, and Seborga's royal destiny is uncertain.