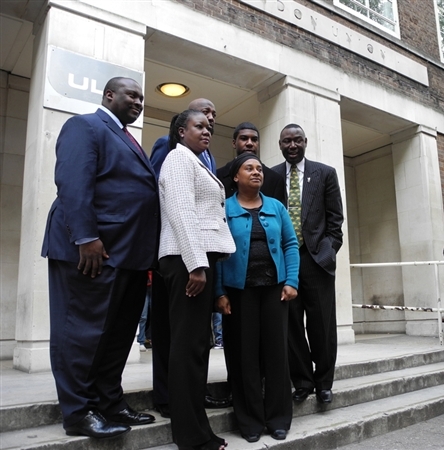 Grieving mother Sybrina Fulton (left, in white jacket), whose unarmed teenage son was shot dead by a neighbourhood watchman in America, sending shock waves around the world, has given strong support to Black Britons.

She said that particularly young people “should not be intimidated because everybody should be free to wear what they want to wear and not be judged”.

She added, in an exclusive interview: “Of course, they (people wearing a hoodie like her 17-year-old son) cannot remove the colour of their skin but they certainly should not be afraid to walk in their community and we need to make sure that laws are made and the right people are taking a look at some of the things going on with the profiling issues.”

A tearful Fulton said: “I am still grieving. It happened so suddenly. Travyon was a healthy teenager. He was not sick. He was not ill. So, this was a sudden death or sudden murder of a boy who was healthy and it is going to take me a while to come to terms with that. He had a bright future ahead of him.”

George Zimmerman tracked then shot Trayvon Martin in the grounds of a gated apartment complex in Sanford, Florida, in February. Zimmerman was initially arrested, but released by police after he claimed self defence under the state’s controversial “stand your ground” law which allows anyone to shoot another person if they feel seriously threatened. The case caused outrage amongst African-Americans, who protested across the country. After more than two million people signed an online petition, Zimmerman was arrested and charged with second degree murder. He has pleaded not guilty and is free on bail, fitted with an electronic tagging device.

Fulton and Trayvon’s father Tracy Martin were on a short visit to London, from Florida, to share their experiences with key black British figures including Doreen Lawrence, mother of murdered teenager, Stephen, Lord Ouseley, former Commission for Racial Equality Chair, and the Society of Black Lawyers. The couple, who are divorced, came with their son, Jahvaris, 21, and lawyers Daryl Parks and Benjamin L. Crump.

They hit out against the use of racial profiling which they claim led to Trayvon’s death and warned Britain’s black community to stand up against its use. Doreen Lawrence joined them at a public rally at the University of London last week to issue a heartfelt plea to Britain’s black youths to listen to their parents more often.

Martin told The Voice: “We have to start teaching at home as well as in the schools. You can’t be afraid to leave your home, you can’t be afraid to walk down the street and feeling that someone is going to do something to you, you have to be comfortable in your surroundings. I think we need to educate more on conflict resolution. How to walk away from plain ignorance and it starts at home.”

Fulton added: “Profiling is an issue in the US as well as here in London. I should not be looked at differently because of the colour of my skin. You also have to look at my character and my education as well. So those are some of the broader things that we need to try and get resolved.”

Despite living thousands of miles apart, Trayvon’s parents and Doreen Lawrence were united in grief at the tragic loss of their teenage sons. Stephen Lawrence, aged 18, was murdered in 1993, but it took 19 years for justice to catch up with two of his murderers in January.

Fulton and Martin spoke warmly of the support they got from Doreen Lawrence, after being taken by her to visit the Stephen Lawrence centre in Deptford, south east London. They have set up their own foundation in memory of their son. Fulton said: “Lots of people have said to us they know how we feel and they sympathise with us. But, until you have lost a child, it is very difficult for you to really understand how we feel and the hurt and the pain that we have.”

Martin’s gave a special message to readers of The-Latest.Com. He said: “I would just like to say thank you. We are happy with the support and the arrest does not mean its over. We have to keep pushing for a conviction and help other people caught in similar situations.”