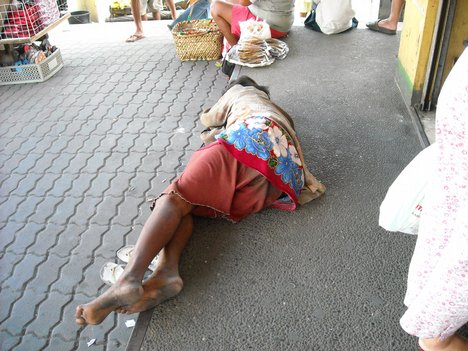 Inside this city’s earthquake-cracked psychiatric hospital, a schizophrenic man lay naked on a concrete floor, caked in dust. Other patients, padlocked in tiny concrete cells, clutched the bars and howled for attention.

Faeces clotted the gutter outside a ward where urine pooled under metal cots without mattresses.

Walking through the dilapidated public hospital, Dr. Franklin Normil, the acting director, who has worked there for five months without pay, shook his head in despair.

“I want you to bear witness,” he told a reporter. “Clearly, mental health has never been a priority in this country. We have the desire and the ability, but they do not give us the means to be professional and humane.”

As disasters often do in poor countries, Haiti’s earthquake has exposed the extreme inadequacies of its mental health services just at the moment when they are most needed. Appalled by the Mars and Kline Psychiatric Centre, the country’s only hospital for acute mental illness, foreign psychiatrists here have vowed to help the Haitian government create a mental health care system that is more than just an underfinanced institution in the capital city.

“Conditions at Mars and Kline are particularly bad, although this kind of place is not unique to Haiti,” said Dr. Giuseppe Raviola, director of mental health and psychosocial services for the Boston-based Partners in Health, which runs 10 hospitals in Haiti. “Still, now that we’ve seen the hospital in the capital city, it is clear that that we have to treat people in their communities.”

Ultimately, international experts are encouraging the Haitian Health Ministry, which they say is receptive and eager for help, to incorporate mental health care into the primary health care system and to make it available throughout the country.

Right now, though, the need for psychological first aid and emergency psychiatric treatment is so acute that foreign psychiatrists are seeing patients, setting up programs and rapidly training Haitian doctors, nurses and community workers in everything from psychopharmacology to group relaxation techniques. Before the quake, there were only about 15 psychiatrists in all of Haiti.

The foreign psychiatrists emphasise that they have found Haitians to be impressively resilient, but the disaster has nonetheless set off reactions ranging from anxiety through psychosis. Most worrisome are cases like that of Guerda Joseph, a 41-year-old woman who tumbled into a catatonic depression shortly after she was pulled from the rubble of her home. Mute and nearly immobilized ever since, she lies on floral sheets at the General Hospital, her Bible tucked beside her pillow, her 25-year-old adopted son by her side day and night.

More common, though, is what Dr Lynne Jones, a child psychiatrist and disaster expert with the International Medical Corps, calls “earthquake shock,” a persistent sensation that the earth is still shaking, which makes the heart race and causes chest pain.

“This is an understandable response, and it’s important to let people know, ‘You are not crazy,’ ” Dr. Jones said. “I use a kind of metaphor: ‘Your body has a very effective fire alarm. One of the reasons you’re alive today is that it went off during the earthquake. You ran out of that building. Great, you survived. Unfortunately, the fire alarm is now sensitive and goes off when you don’t want it to, or maybe it never shut off.’ ”

For those with a history of mental illness, the earthquake has been especially destabilizing. Many lost homes, caretakers and medication supplies, and the institutionalised were displaced, too.

Mars and Kline, partly damaged, evacuated most of its 100 acutely ill patients; only some have returned. And the sole hospital for chronic mental diseases, Défilé de Beudet in Croix-des-Bouquets, seriously damaged, shifted scores of patients to the grass outside.

Inside Mars and Kline’s walls, neighbours have established a tent city, festooning the 52-year-old psychiatric hospital’s facade with laundry. Their presence has created a security nightmare for the institution’s guards, said Louisner Aubin, the administrator, given that patients have returned from the earthquake especially agitated and sometimes violent.

“We have to lock up the worst cases to keep the worst from happening,” Mr. Aubin said.

Also in the courtyard are two psychiatric triage tents where more than 100 people are showing up daily, reporting extreme stress and post-traumatic symptoms of nightmares, memory lapses, sleep disturbances and loss of appetite, Dr  Normil said. Some, with psychoses, have been admitted, and more will arrive needing admittance, he said.

“We’re in a crisis situation,” he said. “Even before the earthquake, we did not get the resources to feed or clothe our patients properly. We had barely any staff, and these are patients who could be rehabilitated if we had the means.”

Leaving Mars and Kline to walk to the nearby General Hospital, Nicholas Rose, a psychiatrist from England, said, “It’s straight out of Hogarth, really,” referring to the 18th century engravings of an insane asylum by the artist William Hogarth.

In and around the two hospitals, apparently mentally ill men wander the streets, ragged and filthy. One sits naked atop a pile of rubble, another wears caked mud.

At the General Hospital, foreign psychiatrists say that they are seeing several new cases daily of psychosis, severe depression and other disorders. Guerline Présumé, a formerly mild-mannered young mother, was admitted a few weeks ago for what was diagnosed as a manic disorder. On the day of the earthquake, she ran from a collapsing house that killed her older sister and disappeared, screaming, into the streets. It took her husband a month to find her; when he did she was muttering and spitting obscenities.

“The earthquake drove her crazy; it’s that simple,” her husband, Wilkinson Charles, said, adding that he feared she had been “taken advantage of” while living without him on the streets.

Many with less severe issues are seeking help at the medical clinics in the big tent cities, like the one in Pétionville, where Dr. Jones and a psychiatric colleague, Peter Hughes, ran a mental health clinic one day last week while simultaneously training a Haitian internist.

“Remember, these are not our patients, these are your patients,” Dr. Jones said to Dr. Charles Samuel, the internist. “We are going to teach you so that you can carry on.”

The doctors saw Jean Pierre Francillon, shy and smiling, who was suffering high blood pressure and complained of trembling and heart palpitations; Ketie Kledano, 52, who said she was anxious, plagued by headaches and could not sleep or eat; and Naomi Joseph, 8, who wore a pink camouflage “USMC Cutie on Duty” T-shirt and, according to her mother, “spits, spits, spits” all day long.

There were some cultural and linguistic barriers. After Dr. Samuel said of Mr. Francillon, “The truth is what he’s talking about is not serious. It’s a reality that goes along with being Haitian,” Dr. Hughes tried another approach. He explained the theory of the bodily fire alarm and told Mr. Francillon, “You’re not mad,” which the Creole interpreter delivered as, “You’re not angry.”

Leading Mr Francillon to a cot, where he slipped off his mud-caked black loafers, Dr Jones guided him through a relaxation exercise. Trying to get him to visualize a calming moment, she asked, “Have you ever sat in the ocean and had the water wash over you?”