When I get lost on the internet I read all manner of beautiful things. Through the magic of this frequent occurrence for me, I learned a little more about everybody's favourite crazy dictatorship the other day.

The country is a place that's stuck in a time warp - a time where Communism is still accepted and pint-sized leaders are all the rage. It also happens to be the only place governed by a dead Head of State.

There has always been a somewhat disconcerting yet unavoidable interest in totalitarian regimes. Aside from Turkmenistan, there hasn't been a good old dictatorship to gawp at with incredible awe in a long time. North Korea has remained wonderfully insane since the Korean War of 1950, and went largely unnoticed to all but the South Koreans until George W. Bush added the peninsula to his Axis of Evil.

Having taken an active interest in the DPRK for many years due to my history background, I've heard everything about the  "Democratic People's Republic". The funny thing is, pretty much all of it is true; it's the country that creates the benchmark for unbelievable rumours about other places.

For example, the roads of North Korea's capital, Pyongyang, as well as any other areas deserving of an infrastructure (read: none), are famously designed to allow jet fighters to land. They would probably have little difficulty avoiding traffic either; an estimated nine per cent of the 300,000 road vehicles in the country are privately owned - in most cases by government officials.

"Mass Games" are the country's version of the Olympics, except much more regular and perhaps more entertaining - if you can ignore the slave-like conditions to which the performers are subjected. One hundred thousand people synchronise to hold coloured boards to depict famous scenes of North Korean freedom, strength of will and superiority - like Nuremburg without the torches, I suppose. And more gymnastics. They are played to only around five-10,000 visitors, making it akin to the England football team and their opposition watching the supporters having a kick-about in the stands. 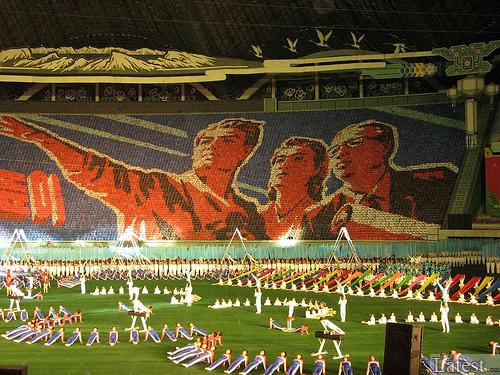 However, what typifies North Korea's both fascinating and unbelievably worrying motives is through what many have branded Propaganda Village, or Kijong-dong. It lies on the heavily-patrolled demilitarised zone (DMZ) between North and South Korea. I still have no idea why they have kept up the charade for so long.

Purely for show, the North Koreans fabricated an entire village to show off their wares to the South, using actors and actresses to cut the grass, turn the lights on in most buildings at the exact same time, and pretend to live happy, poverty-free lives in the houses.

It sounds pretty silly given that 1,000,000 DPRK and 600,000 South Korean soldiers man the border. It doesn't help that everyone knows that the North side of the DMZ is heavily landmined, particularly around the houses.

After the recent development of high-intensity binoculars, it's been noticed that the 'houses' have neither rooms nor windows. The same actress from one house has been known to hang out the same five items of washing every day. For 15 years. You'd think they'd actually try to make it more believable, wouldn't you? 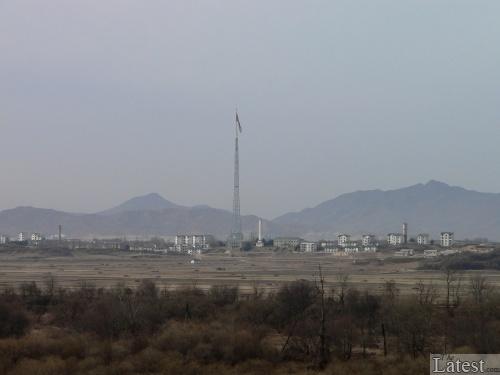 Things have died down in the village since the flagpole war of the 1970s. I know, it's hard to believe things could ever get back to normal after such an international crisis.

Kijong-dong, as a result of the battle, has the world's tallest flagpole measuring 160m, proudly flying the North Korean flag at its peak. It wasn't as big before, but after the South Koreans in Taeseong-dong decided that it would be a laugh (in a very tit-for-tat way) to make one bigger, the DPRK responded within hours to make theirs even taller.

How nicer a place would the world be if we dedicated our resources to flagpole construction? It would be cheaper in the very least and still convey the metaphor for the unnecessary stockpiles of weapons as seen in the Cold War and in the present day. On top of this, the flagpole would still be useful, unlike every nuclear weapon in the world after the first dozen or so.

The North Koreans, just to make sure that they covered both sides of terra firma, dug tunnels too. Four to be exact ( …and counting, no doubt). They thought that the old  'coal mining' excuse ought to be one good enough to dig, in one case, a mile-long tunnel 246ft below the ground with full concrete support, lighting and a boatload of military supplies.

When the Southerners found it (after seeing steam coming out of the floor), they were immediately gunned down. The tunnel could shift a division of troops (around 2,000) in an hour. They even went to all the effort of painting the granite black to pretend it was actually coal. Genius.

Really, though. Who are they trying to fool?

Now in 2008, after a brief 15-year period of being utterly broke, the North Korean government decided to finish a few things. These nigh-on complete buildings and ridiculously ornate sculptures are testaments to Kim Jong-il and his dead Head of State father, Kim Il-sung.

The most striking is, no doubt, the 26m high bronze statue of Kim Il-sung in the centre of Pyongyang. Many say it's impossible to ever grasp the size of it - still, it certainly makes you think of just how much money it cost, especially given that there are no natural resources of bronze in the entire peninsula.

The strangest is the Ryugyong Hotel - started in 1987, stopped in 1992, restarted about two months ago. It's absolutely huge - 105 floors to be exact. After messing up the foundations (mostly due to leaving it for so long), Balfour Beatty are apparently finishing the job for them. To quote a visitor regarding the hotel,  "nobody talks about it. Ask them a question and they immediately talk about something else. It's a very sore subject." 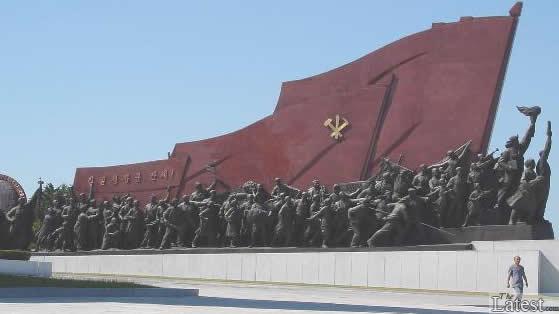 Esquire magazine found that official pictures of the Pyongyang skyline had rendered it invisible, completely deleting it from view. Only somewhere like North Korea could try and fool its own people into thinking that a 1,000ft skyscraper didn't exist.

Still, it's not the first time. Mike Chinoy, a former reporter for the American CNN new channel, compared the hotel to a problem of Kim Il-sung, the eternal leader and aforementioned dead Head. He had a giant calcium deposit on his neck for his dying days which the media tried to cover up completely. It was down to childhood malnutrition, apparently. Only one picture actually proves it existed, taken at a time by which point it was the size of a baseball. It was clearly visible, however hard officials tried to hide it from view.

Still, the Ryugyong Hotel is amazing to see. The Juche Tower is breathtaking too, alongside the Arch of Reunification and the Proletariat Freedom sculpture - all beautiful testaments to what is a corrupt leadership. It proves that a military dictatorship gets stuff done though, I guess. 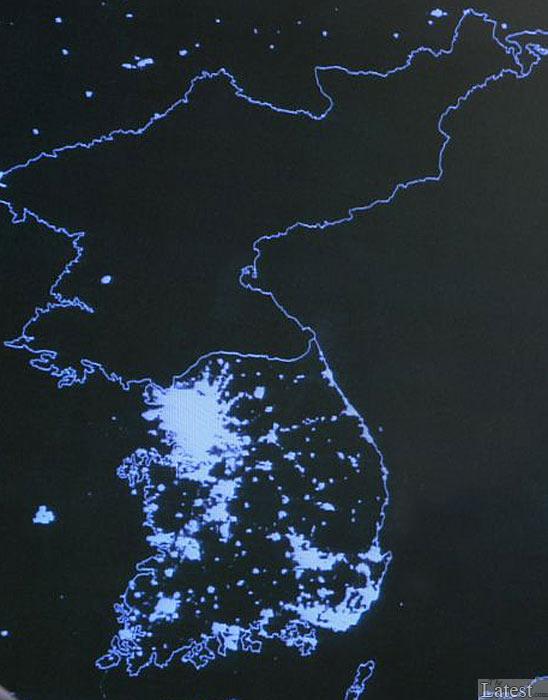 If you wonder if the vast majority of North Koreans are on the side of their leaders, it's worth looking at the reaction of Kim Il-sung's people to his death. I doubt even Jesus would get such a send-off if his second coming went awry.

It's like there's nothing else to do in the country except worship the leaders. Then again, judging by the amount of electricity and illumination in North Korea, I'm not exactly surprised; see if you can guess which is North and which is South (that is to say, if you're not a whizz with a compass).

And yet the world needs extremes like North Korea. As backward and despotic as it is, as well as throwing the sheer notion of human rights out of the window, it makes us feel better about ourselves. It also supplies us with endless pub facts, staggering photos and unbelievable happenings.

The tours are getting bigger and better by the day. And you know what? Alongside Chernobyl, it's top of my list of places to go to. Might as well do something interesting on holiday, right?

Letter from the climate change summit

Palestine: Britain's stand on Arab Spring will be tested

2 Responses to "A dictatorship's delights"

<p><strong><u>Chris Gaynor</u></strong></p> I would love to go to all manner of places where there are dictorial regimes. Having been to Romania and experienced their so called democracy which, some detest, the only way to learn about the other side of democracy, in other words, communism or fascism is to live it. That is education. Not learning the terms in a History book, and getting a piece of paper just to say you were able to memerise what it said on page 34 about ....... Education should be more practical than just academic. The kids here have it easy......

<p>I completely agree - I have no idea what the fallout of Ceaucescu&#39;s reign must be like today. After seeing Berlin, it&#39;s clear that nearly 20 years after the fall of the Wall, there is still so much work to do -and that&#39;s probably the least Eastern European part of the old Eastern Europe!</p><p>It&#39;s kind of like teaching a foreign language, though. Get the kids interested at a young age before they start getting arsey about learning strange things. Trips abroad is a great way to motivate pupils about history and culture! <br /></p>