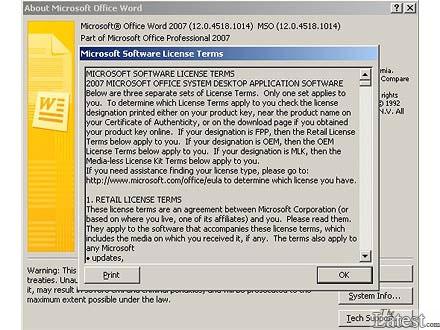 Nobody reads terms of service agreements. Those legal documents new users have to click a box to say they've read. And the truth is, they hardly matter to anybody but the cyber-rights-now crowd who get worked up by articles on the Boing Boing website and the paranoid lawyers at large Web companies who want to avoid money-fishing lawsuits.

But sometimes they go far beyond protecting corporate interests into la-la land. Did you know that when you download Google's new Chrome browser, you agree that any "content" you "submit, post or display" using the service-whether you own its copyright or not-gives Google a "perpetual, irrevocable, worldwide, royalty-free, and non-exclusive license to reproduce, adapt, modify, translate, publish, publicly perform, publicly display and distribute" it?

Google's ambitions for Chrome are even larger than we thought; by the letter of this license, Google will own all information that flows through its browser. But Chrome's terms of service are just the latest in a long line of ludicrous legalese. The terms of service for Google's popular email product Gmail contains the same language as the Chrome TOS mentioned above, but it's also got this Orwellian gem tucked in it:

"Google reserves the right (but shall have no obligation) to pre-screen, review, flag, filter, modify, refuse or remove any or all Content from any Service."

Not that Google is actually going to stop you from sending that dirty email about sex and drugs to your dirty friends, but they could.

Facebook is the Internet's most popular photo-sharing site. Which, according to Facebook's terms of service, means Facebook could be a very profitable stock photo firm if it wanted to be.

By posting User Content to any part of the Site, you "automatically grant, and you represent and warrant that you have the right to grant, to the Company an irrevocable, perpetual, non-exclusive, transferable, fully paid, worldwide license (with the right to sublicense) to use, copy, publicly perform, publicly display, reformat, translate, excerpt (in whole or in part) and distribute such User Content for any purpose, commercial, advertising, or otherwise, on or in connection with the Site or the promotion thereof, to prepare derivative works of, or incorporate into other works, such User Content, and to grant and authorize sublicenses of the foregoing."

The terms of service for YouTube also say that uploading anything onto the site gives them license to do whatever with it. More obnoxiously, YouTube also says that even after you delete content from the site, they're allowed to keep it forever:

"You understand and agree, however, that YouTube may retain, but not display, distribute, or perform, server copies of User Submissions that have been removed or deleted. The above licenses granted by you in User Comments are perpetual and irrevocable."

My favourite obnoxious terms-of-service clause is in the license for AOL's instant messenger client. You're only allowed to use AIM for lawful purposes, so no pinging your friends about smoking up or scalping tickets. Also, turns out you can't say dirty words or obscene things over the service, which probably means most people can't talk about their bosses, last night's overtime loss, or that girl in fourth period:

"You May Use the AIM Products for Lawful Purposes Only. You may use AIM Products for lawful purposes only. You may not post on or transmit through community areas (e.g., message boards, chat, e-mail, calendars, instant messaging products) or other means any material that (1) violates or infringes in any way upon the rights of others, (2) is unlawful, threatening, abusive, defamatory, invasive of privacy or publicity rights, vulgar, obscene, profane, indecent or otherwise objectionable, (3) encourages conduct that would constitute a criminal offense, (4) gives rise to civil liability, (5) violates any policies posted in any community areas or (6) otherwise violates any law. You also may not undertake any conduct that, in AOL's judgment, restricts or inhibits any other user from using or enjoying the AIM Products, including without limitation the community areas."

Both Mozilla's terms of service for Firefox and Microsoft's EULA for Internet Explorer 7 don't have these weird clauses.

The Big Issue is homelessness