With the European Union (EU) as its largest trading partner and the United States as its largest military backer, Israel has no reason to reconsider its denial of Palestinian self-determination.

In fact, the latest carnage in Gaza, did not move the American public at all. A solid 57 percent of the Americans regarded Israel's recent offensive on Gaza as justified. In early August, US President Barack Obama stated that he has "consistently defended Israel's right to defend itself, and that includes doing what it needs to do" and that it's Hamas which is putting the Palestinians at harm's way. No major political figures in the US have come out staunchly against Israel's military aggression.

The American public views Israel positively in general. Recently, the portion of US citizens who have a favourable opinion of Israel has ranged from 60 percent to 72 percent. Furthermore, two thirds of Americans would either increase US military assistance to Israel or maintain the current level of aid.

Although the EU has followed the US in supporting Israel in the past, there are signs that this might change. EU citizens are way ahead in awareness and opposition to Israel's conduct from their American counterparts and therefore are much more likely to pressure their governments toward changing their policies towards Israel. 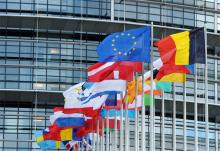 The way the over half a billion EU citizens view Israel in general and its policies towards the Palestinians in particular is undergoing a historic transformation.

Already in 2003, when Israel had been trying for over three years to subdue the Second Intifada, an EU survey showed that 60 percent of EU citizens regarded Israel as a threat to world peace.

In 2011, at the height of the Palestinian bid for statehood in the UN (United Nations), a survey showed that 59 percent of respondents in the UK, 69 percent in France and 71 percent in Germany thought their governments should vote in favour of a UN resolution recognising a Palestinian state.

Presently, the awareness of Israeli policies of occupation, apartheid, land-annexation and military aggression is at its all-time high within the EU. According to a YouGov poll, 62 percent of the British public thinks that Israel is committing war crimes in Gaza and only 12 percent said it was not.

In France, a poll cited by the news magazine L'Express revealed that 12 percent of the respondents supported Israel during its assault on Gaza. This number is quite low given that throughout Israel's history, the bilateral relations between Israel and France have been cosy. Since Israel's founding until France's withdrawal from Algeria in 1962, France was Israel's main weapons supplier.

Although the EU trades military hardware and technology with Israel in billions of euros, both imports and exports, there is no certainty that EU member states will continue on this path.

Spain has frozen arms exports to Israel, with which it has conducted large-scale trade in military equipment with Israel. Hence, the move by the Spanish government made the news around the world.

The Finnish foreign minister Erkki Tuomioja, together with over 250 Finnish dignitaries, has signed a petition calling for an immediate discontinuation of all forms of military trade and cooperation with Israel. Tuomioja has said that Finland should never have engaged in dealings with the Israeli military industry and that Israel should face "consequences" for its actions, hinting at "sanctions".

The UK has also announced that it will freeze some of its arms exports to Israel "if hostilities resume". Also in early August, the UK Foreign Office minister Baroness Warsi resigned from the government, saying that UK's approach towards Israel is "morally indefensible" and that she "can no longer support Government policy on Gaza".

From September 1 onwards, the EU will also block the entry of all animal products for human consumption coming from Israeli settlements, including eggs, poultry and dairy. It is possible that this marks the beginning of concrete actions by the EU to counter Israel's illegal settlement infrastructure.

Comparing the positions of the general public and the political class on Israel-Palestine in the EU and the US leaves little room for ambiguity: The level of knowledge on what is unfolding in historical Palestine is higher, and opposition to the way Israel carries on is more intense, in Europe than in the US.

The approach of EU member states towards Israel is noticeably different than that of the US. Labelling settlement products, let alone banning them, suspending arms exports, government minister resignation in protest for cosy relations with Israel, a foreign minister calling for an immediate discontinuation of all forms of arms trade with Israel and other such manoeuvres are not to be expected from the US anytime soon.

The civil society of the E 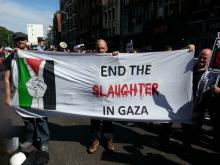 U has all the means at its disposal to bring about a change in EU policy towards Israel. Specifically, the EU can suspend the EU-Israel Association Agreement which grants vital benefits to Israel. The agreement states that "[r]elations between the Parties, as well as all the provisions of the Agreement itself shall be based on respect for human rights and democratic principles" which constitute "an essential element of this Agreement".

Another agreement that the EU keeps violating is the EU Code of Conduct on Arms Exports which asserts that Member States will: "not issue an export licence if there is a clear risk that the proposed export might be used for internal repression [and]exercise special caution and vigilance in issuing licences, on a case-by-case basis and taking account of the nature of the equipment, to countries where serious violations of human rights have been established by the competent bodies of the UN, the Council of Europe or by the EU."

Based on these two documents, the EU can enforce sanctions against Israel and start pressuring it to abide by international law. Banning products from illegal settlements is just the beginning and such bans should extend to any products from Israel's military industrial complex - the strongest institution of the apartheid regime.

Once the EU takes its own agreements and European public opinion seriously, it ceases being Israel's collaborator. That might prove pivotal in dismantling the longest ongoing military occupation in the post-WWII era and undoing the world's last apartheid regime.

* Bruno Jantti is an investigative journalist specialising in international politics