Three minor parties are slugging it out for one of the seats representing London in the European parliament amid charges from a flamboyant Black campaigner that his rivals are stirring up anti-immigrant and racist sentiments, writes Marc Wadsworth.

Christian Party candidate Rev George Hargreaves, 51, the wealthy songwriter and producer turned evangelical religious leader and political activist, says the British National Party (BNP) and United Kingdom Independence Party (UKIP) are vying with each other to be more rightwing. The main Labour, Conservative and Liberal Democrat parties are running scared of the BNP and UKIP  — both of whom have an anti-immigration populist appeal to disaffected white voters. The Christian Party and longer-established Christian Peoples Alliance have joined forces to fight the BNP. 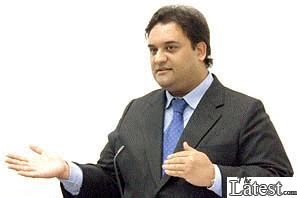 There were nine seats up for grabs in the multiracial UK capital at the last election for the European Parliament five years ago (now there are eight) and newcomers UKIP snatched one of them and the Greens another. Only one African Caribbean or Asian candidate, Labour's Claude Moraes, picture right, was elected despite the fact people of that origin make up more than 30 per cent of the population.

In May last year the BNP's Richard Barnbrook caused an upset by winning the party's first seat on the Greater London Assembly and The-Latest uncovered him trying to gain respectability by writing a blog for a Fleet Street national newspaper. The openly racist party has been polling disturbingly well in run-down white working class areas of east London and Essex in the suburbs of the capital and this has panicked the main political parties.

Hargreaves, who made his political debut as a candidate for the anti-European Parliament, Referendum Party in 1997  — the year Labour's pro-European Tony Blair became prime minister  — says the Christian Party he now leads is  "the only one that can beat the BNP". His thesis is based on the complex proportional representation party list voting system used which almost guarantees the big three parties seats and leaves smaller ones to fight it out for the last one or two allocated.

Veteran human rights campaigner Peter Tatchell, a leading member of the Green Party, disagrees. He says: "A big vote for the Greens is the surest way to stop the BNP winning a seat. The BNP is a divisive, bigoted, sectarian, nasty party, with no practical solutions to the economic crisis, mass unemployment, climate chaos and the corruption of parliament.   It has a sick history of scapegoating and vilifying Black, Jewish, gay and Muslim people."

The current political storm in the UK over MPs fiddling their expenses is predicted to hurt the main parties at the June 4 poll, with ruling Labour being punished the most.

At the 2005 UK general election in Scotland's almost 100 per cent white Na h-Eileanan an Iar constituency Hargreaves took 7.6 per cent of the votes cast and beat the Conservative Party candidate. 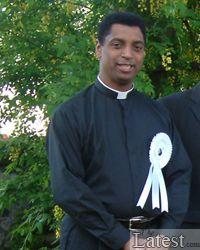 A year later he formed the Scottish Christian Party, for which he stood in the Dunfermline and West Fife by-election and won a humbling 1.2 per cent on a conservative  "family values" platform which opposed abortion and euthanasia and stated that  "homosexuality is a sin".

Some commentators remark that this illiberal stance of Hargreaves sits awkwardly with his music business incarnation two decades ago before he took his holy vows. Then he was happy to court a gay following for hit songs he wrote for the pop diva Sinitta, including So Macho and Cruising from which he still earns handsome royalty payments. He boasts of introducing Sinitta to Pop Idol king Simon Cowell.

When Hargreaves stood for the Christian Party at the Haltemprice and Howden by-election last year, where he asked the electorate to use their vote to demand a referendum on the European Union which he believes is  "the greatest threat to our civil liberties", he got just 76 votes and came 16th out of 26 candidates.

But he insists that this time the tide has turned and his high point percentage vote figure in Scotland would be enough to get him elected to the European Parliament which he so strongly he opposes. He is against the Brussels and Strasbourg assembly because he says the  "Euro super state" has been foisted on the British public without them giving consent through a referendum and,  "as an anthropologist I know that is the best way to pit nations and races against each other".

Hargreaves says his Euro campaign has raised  £250,000 and he has put thousands of pounds of his own money into the pot  "as a leader should".

Three hundred billboard posters, featuring his smiling face, have been put up around London, more than four million leaflets distributed, a campaign bus put on the road, with "the best music of any around", a party election broadcast and television and radio interviews. "I've been the subject of probably the highest profile political campaign for a Black candidate ever seen in Britain," says the man who middle name is hype.

"I have been a pastor for 19 years and every favour I have ever done has been called in for us to win the seat and beat the BNP," Hargreaves tells The-Latest.

He adds:  "Things are different now we have Barack Obama as the first Black American president. We've had a wonderful response to our campaign from Black churches whose congregations have expressed a sense of pride that a Black man's face is up there on posters all over the British capital city."

Hargreaves's target is to garner more than 200,000 votes which he admits is  "a mountain to climb", considering he got 70,000 last time. But  "do-able" with "a viral campaign", modelled on the one run by Obama, which hits all the policy  "hot buttons".

He says his politics are neither left, right nor centre but  "up". Yet an examination of his six campaign themes suggests Hargreaves's Christian Party is socially and economically right-wing  — much like his Black church base -   despite an insistence that  "we have a passion for the poor which would make some people see us as leftwing".

The Christian Party is not backed by the apolitical Anglican Church. But Hargreaves says he is heartened by the outspoken statement of the Archbishops of Canterbury and York a few days ago calling on voters not to support the "divisive"   BNP.

This is what the Christian Party stands for in the Euro poll: