Since 2014, more than 20,000 migrants and refugees have died at sea while trying to reach Europe from Africa.

The reality is far worse than what the figure suggests, officials and analysts have warned, as the bodies of those who do not survive are not always recovered, identified and counted. The Central Mediterranean route is described by the United Nations refugee agency UNHCR as the most dangerous migration route in the world - one in six people who departs the shores of North Africa dies.

The journey - after years of suffering and torture in the country of origin, during travel and in Libya - starts with leaving in the middle of the night, often on overcrowded, unseaworthy boats without food and water. Questionable life jackets for the treacherous conditions are only for those who can afford them.

Unaccompanied minors, pregnant women and men with gunshot wounds are all crouched up on the crammed and fragile boats they embark in, knowing fully well they might not set foot on land ever again.

"In life, when you see you've lost everything, you're not afraid of anything any more," a migrant from the Central African Republic said. "You don't see the waves. You just see a boat. And that's your chance to get your freedom again."
In addition to the casualty figures are the ones forcibly returned, especially to Libya, described as "hell" by those who survived the ordeal on their transit.

Since February 2017, at least 36,000 people have been intercepted by the Libyan coastguard and returned to the North African country, UN figures show.

An Associated Press investigation revealed the European Union sent more than 327.9 million euros ($373.8m) to Libya, largely channelled through UN agencies. The EU has also reportedly spent more than 90 million euros ($100m) in funding and training the Libyan coastguard to stop the crossings.

But with the continued use of the route, and the rising numbers of the disappeared and forcibly returned, are European politicians and decision-makers taking a racist and discriminatory approach that is adding to the human tragedy at sea?

"Unfortunately, European politicians and the public appear to have grown weary with the refugee issue and are no longer moved by images of people in distress and dying at sea," stated Jeff Crisp, a research fellow at the Refugee Studies Centre, University of Oxford.

"Despite all of the publicity gained by the Black Lives Matter movement, it is difficult to avoid the conclusion that people who are crossing the Mediterranean are of little concern because they are poor, African and politically insignificant," added Crisp, a former head of policy, development and education at UNHCR.

Maurice Stierl, member of AlarmPhone, an activist network alerting authorities of a boat in distress in the Mediterranean, said that "while the rights of people of colour are systematically violated in the Mediterranean and hundreds continue to drown as a consequence, European politicians and policymakers declare their solidarity with the Black Lives Matter movement as if they were not directly implicated in these rights violations and deaths at sea".

These migrants flee poverty, conflict, war, forced labour, female genital mutilation, corrupt governments and personal threats. Migrants said that having a shot at a "better and safer" life is what drives them away from home and on this perilous journey, hoping to reach Europe.

According to Crisp, in addition to the UN Security Council and the different factions in Libya, the EU has also played a "major part in this tragic situation [deaths] by withdrawing its own search-and-rescue activities, making it increasingly difficult for NGO rescue ships to operate in the Mediterranean, and by supporting the Libyan Coastguard to intercept and return people who are trying to escape from Libya by boat".

While the EU has, over the years, withdrawn its military rescue vessels from the route, the increased anti-migrant stance and policies adopted by the politicians have also resulted in disappearances and abuses.

Humanitarian vessels have repeatedly been blocked from docking or disembarking in Italy and Malta, or there is a delay that leads to increased stress on board the vessels, including suicide attempts. 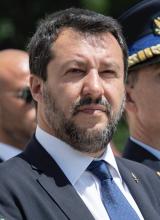 "The populist and the nationalist parties' success was based on them talking about 'the invasion' of migrants and raising suspicion over the role the NGOs played," commented Annalisa Camilli, an Italian journalist.

"The maritime borders became publicised and quickly used as propaganda, becoming a field of political conflict with the humanitarian dimension quickly disappearing," added Camilli, who is also author of La legge del mare, a book about rescues in the Mediterranean.

For Nicholas Romaniuk, search and rescue coordinator for SOS Mediterranee on board rescue vessel Ocean Viking, there is "no effort on the EU's part to save lives out here".
"It seems there's complete disregard for human life and people dying in the Mediterranean. We've been recovering bodies of men, women and children over the last four years and seen things get worse," added Romaniuk.

In 2018, Italy closed its ports to NGO vessels, managing to convince the public that the rescuers were collaborating with traffickers. That was because nobody seemed to care about people dying at sea and the migrants were completely dehumanised, said Camilli.
Stierl added how "European coastguards pushed boats back and attacked them … or left boats unassisted and left the people to die".

Even now, the ones that make it to Europe - either on the boats they leave North Africa on or after being rescued by NGO vessels - may never be accepted even as they disembark on a European port.
For some, it took just a few weeks to reach European shores after leaving home. For others, it has taken more than five years - away from home, family, with just a little bit of money and hope.

More than 5,000 migrants were forcibly repatriated by Italy in 2019.
For those who are returned, the violence, torture and extortion they endured on their journey were for nothing. Some will try the same journey again, hoping luck favours them and they do not end up becoming a statistic.