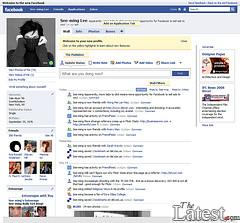 What started as an enjoyable gathering turned into a riot in London's famed Trafalgar Square with people running down the streets, knocking down stools and plants outside restaurants, shops and hotels, writes Marina Watson Pelaez.

It was billed as a  "Silent dance" to take place in the British capital.    "What ´s going on?", was the general response of passers-by. Someone on the most popular social network site Facebook, had organised the event, inviting others to  "play your i-pod or Mp3 Music Player in your ears and dance to your own Music.

" Members were told that no alcohol or disturbances were allowed. The aim was to simply  "have fun", and to make it  "the biggest event." But all hell broke out after about half an hour when a small group of teenagers turned up with a hi-fi system. Attracting a great deal of attention, they were soon pursued by all the excited crowd, who gathered around them in a big circle.

Suddenly, the hundreds of people on the square started running in another direction, after someone suggested going to the underground. Once inside Charring Cross Station, the dancing went on. They all ran into the small Burger King, with some people standing and dancing on top of the counter.

"Head, shoulders, knees and toes, ladies let me see you go down low", was the song that reverberated all night. They then headed in the direction of the Big Ben, which is when everything got a bit out of hand. People stood on top of cars, chased after a limousine (banging on the windows), and kicked down trees outside a restaurant and a hotel.

They also kicked down some stools outside a souvenir shop, leaving flags dispersed all over the floor, and the owners of the premises looking distraught and angry. When they got to the path that leads to the Millennium Wheel, everyone started running back, as they caught sight of the police who were waiting at the end.

Luckily no one got injured. People are talking about this event on Facebook already. Some think it was amazing.  "I enjoyed raving on the lion", said one participant. But others are shocked by the ensuing violence and destruction of property.

Saskia McGregen, 18, said:  "This is anti-social behaviour!" But she also thought it was nice for all the young people to get together and that  "it was okay because it wasn ´t particularly dangerous." The spontaneity of the event appealed to a lot of the participants and people are now planning a similar event for next week.

* See the attached photos for scenes of the event.