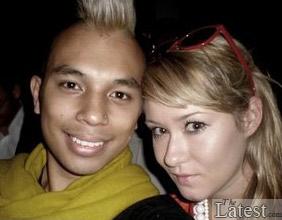 I feel like a real veteran now that I've done three out of the four major fashion weeks (London, Paris and New York) and back for my second season rocking the shows in London town!

London Fashion Week kicked off in a great way with me taking Georgia Goodrick to all the shows. Our first show was Caroline Charles at the BFC Tent in the Natural History Museum, South Kensington.

As soon as we reached the entrance, a photographer rushed over wanting to take pictures of Georgia. Georgia shyly obliged but she was looking damn cool in her shiny red jacket, stripy top, red glasses and loads of accessories. I was boring and wore all black with my yellow $100 scarf from Club Monaco I got for free as the only colour in my outfit.

It was morning so there were free muffins, croissants and Evian to help wake up the people attending. The show opened up with a live band singing Elton John's The Way You Look Tonight. The collection was a fun one with bright, bold colours and animal prints used throughout. Normally I don't like animal prints but I like the way Caroline Charles did them. 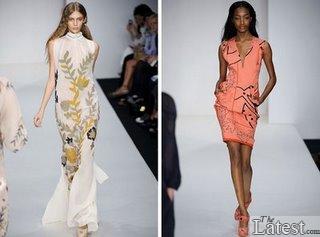 The next show was Ossie Clark, again at the BFC tent. I was particularly excited to see this show as I met Alfred Radley in February when I sat next to him at the AVSHALOM GUR fashion show. Alfred Radley is the one who discovered Ossie Clark back in the 1960s and decades on, the brand is still roaring. Top models such as new star Jourdan Dunn graced the catwalk.

The last show of the day was Karen Brost at the Vauxhall Fashion Scout. Before the show, we sat outside drinking hot chocolates when another photographer asked to take a picture of Georgia. I was well proud!

Karen Brost's show was a uniting of fashion friends where Courtney Blackman of Forward PR was in attendance. This was also a first to see Rebekah Roy's work as she styled the show flawlessly.

A fashion "no no" was when two women in the front row wore the same top. Actually there were three people wearing the same top in the venue. Yikes, but I've been a victim of that with wearing the same trainers or something as someone in a room. That's why I go nuts buying clothes abroad because chances are that people won't have the same clothes back home or they would have to travel distance to get it. At least they looked nice in the top and sat on opposite sides of the catwalk.