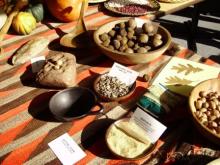 For the majority of Americans Thanksgiving is a time when families come together to give thanks for many things, including them being able to gather for another year to catch up with loved ones with whom they are not in daily contact.

The feast is celebrated today, the fourth Thursday of November. My fondest memories are of attending Thanksgiving dinner as a child at Grandmom’s house. Both my grandparents lived there but, it was always referred to by everyone as her home.

Each year we were travelled on the  bus to Grandmom’s house in Philadelphia, Pennsylvania. When we got off and started walking, as soon as I spotted the old Philadelphia Transportation Company bus/trolley barn, which was a block from Grandmom’s, I would begin tugging my mother’s hand as hard as I could so we would hurry up and get there. I was always so eager to see my grandparents, cousins, aunts, uncles, great aunts and and all who showed up for Grandmom’s scrumptious meals.

Grandmom served the traditional Thanksgiving fare: turkey, stuffing, cranberries, mashed potatoes and gravy, macaroni and cheese, yams, string beans, collard greens, mustard greens and several pies for dessert, usually two of each; mincemeat, apple, pumpkin and sometimes fruitcake. On most occasions, there was homemade eggnog drink, which the children had to taste early before my uncles’ added their "secret" ingredient, which I later learned was liquor.

So many fond memories of my family’s gatherings are attached to a holiday whose history has been misrepresented for nearly 400 years.

The oft recited story of Native Americans, as sort of honoured guests and Pilgrims coming together and feasting at a kumba ya gathering of brotherhood is, at best, an exaggeration. In reality, the colonial settlers had barricaded themselves behind a 10-foot fence in 1621 to prevent interaction with the indigenous people. When members of the neighbouring tribes showed up with provisions, they were cautiously invited inside the fort.

However, shortly afterwards, proclamations of Thanksgiving began springing up throughout the British colonies as each settlement, engaged in some form of warfare with their indigenous neighbours, related to their continued encroachment on the land of the indigenous people, crediting God for His mercy in helping whichever colonists vanquish those indigenous people of the area, often referred to as "heathens and savages", within the text of these documents.

The first officially proclaimed Day of Thanksgiving in Colonial America, later to become the United States of America after declaring its independence in 1776 from Great Britain and fighting against the English in what became known in America as the Revolutionary War, was penned and signed by Massachusetts Bay Colony governor John Winthrop in 1673. He stated:“This day forth shall be a day of celebration and thanksgiving for subduing the Pequots [Native Americans].” 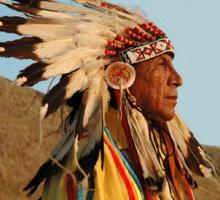 The proclamation thanked God for the massacre of people of the Pequot Nation, with members of the Massachusetts Bay Colony militia having surrounded those gathered for a harvest celebration, opening fire with guns and setting fire to the village, hacking and stabbing to death all Pequot men, women and children that attempted to escape the flames.

In the article, The Defining and Enabling Experience of Our “Civilization” - Genocide and THE THANKSGIVING MYTH, William Bradford, the former governor of Plymouth Colony, is named as having been on site to make the following observations during the massacre of an estimated 400 to 700 Pequot people in the spring of 1637.

He wrote: “Those that escaped the fire were slain with the sword; some hewed to pieces, others run through with their rapiers, so that they were quickly dispatched and very few escaped. It was a fearful sight to see them thus frying in the fire…horrible was the stink and scent thereof, but the victory seemed a sweet sacrifice, and they gave praise thereof to God, who had wrought so wonderfully for them, thus to enclose their enemies in their hands, and give them so speedy a victory.”

The massacre was led by Captains John Underhill, John Mason and Philip Vincent, men of the Massachusetts Bay Colony militia.

At the Mashantucket (Western) Pequot Tribal Nation website, a firsthand account is provided, authored by Captain Underhill, as well as a drawing depicting how the Pequot people and their encampment had been surrounded.

From the above mentioned site, in Captain Underhill’s words: "The attack began at dawn on May 26th (Old Calendar – June 5 New Calendar) when the English surrounded the two-acre village and fired a volley through the gaps in the palisade. The force of 77 English, 60 Mohegan and 200 Narragansett surrounded the fort and the English fired a volley through the palisade walls."

He added: "Mason and Underhill, with 20 men each, entered the fort through entrances on the northeast and southwest sides. Their objective was to 'destroy them by the Sword and save the Plunder' [Mason]. Unknown to the English the fort was reinforced the night before by 100 warriors from other villages, bringing the total number of warriors inside the fort to approximately 175.  Within 20 minutes English inside the fort suffered 50 per cent casualties. It was then that Mason said: 'We should never kill them after that manner: WE MUST BURN THEM!'"

Frank B. (Wamsutta) James, an Aquinnah Wampanoag elder and Native American activist, was invited to speak at an event organised by Massachusetts elected officials to commemorate Thanksgiving in Plymouth, Massachusetts, in 1970. After officials reviewed a draft of his candid speech, which he would not change, the request for his participation was withdrawn.

A copy of the speech he intended to deliver can be found here. Among his poignant words were: "It is with mixed emotion that I stand here to share my thoughts. This is a time of celebration for you - celebrating an anniversary of a beginning for the white man in America. A time of looking back, of reflection. It is with a heavy heart that I look back upon what happened to my People."

From the removal of Mr James to stop him telling some of the uncensored history of the Native People in the Massachusetts area and those in the United States at large, the National Day of Mourning was born.

This year, 2014, will be the 44th year of the gathering of those that acknowledge the overlooked pain, suffering and attempted extinction that occurred on the North American continent as European colonisers attacked and sought to destroy the People that were already there when they first arrived in what would later come to be known as the United States of America.

* To learn more about the National Day of Mourning, access this link to Oppressed Peoples Online Word.