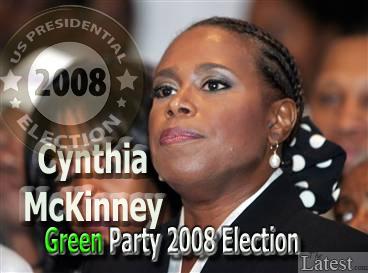 The very foundation of the US economy is crumbling underneath our feet. We the people must now seize the time! We have always had the capability of determining our own destiny, but for various reasons, the people failed to elect the leaders who provided the correct political will. There was always some corporate or private special interest that stood in the way of the public good.

And they always seemed to have the power of the purse to throw around and influence public opinion or our elected officials.

This represents a unique moment in US history and we must now seize the time for self-determination - for health care, education, ecological wisdom, justice, and all the policies that will make a difference in the lives of the people including an end to all wars, including the drug war!

The crisis was staved off for a time for some of our major finance engines when they were able to obtain bridge funding from certain sovereign wealth funds. That option grows increasingly dim as The Federal Reserve is becoming the lender of last resort. This means that the people are becoming the owners of the primary instruments of US capital and finance.

Now, as we ponder the importance of this moment to do good and serve the needs of the people, some politicians have already figured out their answer for us: win or steal the next election, prepare for more war, and leave it to others to try and figure out what to do next. While banks are failing all around us and the US taxpayer is drenched with news of billion-dollar bailouts for "selected" companies, the Congress, which has utterly failed in its twin responsibilities of setting policy and Executive Branch oversight, plans to adjourn instead of setting new policies; lessening the impact of the economic freefall on innocent victims; or stopping war, expansion of war, new war, and occupation.

In a dizzying turn of recent events, we have all witnessed the collapse of Fannie Mae and Freddie Mac mortgage providers, investment banks Lehman Brothers and Bear Stearns, and insurer American International Group (AIG), and other companies. So far, at least 11 banks have filed for bankruptcy this year. The case of the AIG bailout is particularly curious as Merrill Lynch was denied taxpayer largesse. I wonder if AIG was the selected company for bailout because of its relationship to the US intelligence community and what others would discover if AIG's books were opened in an audit? The last person to get close to AIG and its shady operations was president George W. Bush's confidante Eliott Spitzer.

But some more fundamental issues must be explored here, relating to the underlying assumptions that have guided US political and economic activity, particularly over the last eight years.

The Bush Administration's "anything goes, just don't get caught" attitude has set the tone for what we are witnessing today. To be sure these problems didn't start in January of 2001, but they sure were allowed to accelerate during the George W. Bush Administration. For example, what tone was set when the Administration shipped $12 billion to Paul Bremer's provisional government in Iraq in cash on wooden pallets for Iraq reconstruction? No wonder $9 billion of it was "lost." What I'm constantly reminded of is that the money didn't just vanish, somebody got it. Now it's up to us to find out who!

However, the Administration's blatant disregard for good governance, the rule of law, standards of moral and ethical conduct, and even etiquette, when coupled with a laissez-faire, "go-along-to-get-along" attitude from Congress meant that no holes were barred and no hands were on the deck - a sure prescription for disaster.

In my reading over the course of the last few years, I had to become somewhat conversant with the language of the new economy: bundled mortgages, securitisation, SPEs, SIVs, derivatives. But in addition to the old concepts that always seemed to be with us - predatory lending, red-lining, no affordable housing amid "the housing bubble," - it soon became clear that basically folks had figured out a way to make money off of a ticking time bomb.

Kind of like prisons for profit. And even though the Enron scandal was supposed to have cleaned up a lot of this, unfortunately, even Fannie Mae and Freddie Mac regularly engaged in some of these practices and that's why you and I own them today. I believe it is true that the very foundations of the US economy and conventional political behaviour have been shaken. Now is not the time for business as usual. And although this is by no ways exhaustive, here are a few things that I think the Democratic-led Congress could work on now instead of adjourning:

1. enactment of a foreclosure moratorium now before the next phase of ARM interest rate increases take effect;
2. elimination of all ARM mortgages and their renegotiation into 30 or 40-year loans;
3. establishment of new mortgage lending practices to end predatory and discriminatory practices;
4. establishment of criteria and construction goals for affordable housing;
5. redefinition of credit and regulation of the credit industry so that discriminatory practices are completely eliminated;
6. full funding for initiatives that eliminate racial and ethnic disparities in home ownership;
7. recognition of shelter as a right according to the United Nations Declaration of Human Rights to which the US is a signatory so that no one sleeps on US streets;
8. full funding of a fund designed to cushion the job loss and provide for retraining of those at the bottom of the income scale as the economy transitions;
9. close all tax loopholes and repeal of the Bush tax cuts for the top one per cent of income earners;
10. fairly tax corporations, denying federal subsidies to those who relocate jobs overseas, repeal NAFTA.

This crisis does not have to be treated as merely a "market correction," or the result of a few rotten apples in an otherwise pristine barrel. This crisis truly represents the opportunity to introduce fundamental changes in the way the US economy and its political stewards operate. Responsible political leadership demands that the pain and suffering being experienced by the innocent today not be revisited upon them or the next generation tomorrow.

But sadly, instead of affirmative action being taken in this direction, the Bush Administration ratchets up the drumbeat for war, Republican Party operatives busily remove duly-registered voters from the voter rolls, and our elected leaders in the Congress go home to campaign while leaving all of us to fend for ourselves. For the Administration and the Democrat-led Congress, I declare: MISSION UNACCOMPLISHED. For the public whose moment this is, I say: Power to the People!

Please visit www.runcynthiarun.org and read our platform. If you like it, please make a donation so we can spread the news and . . . seize the time!

Why there's been a white backlash in Britain

<p>During the 2008 global economic meltdown the US government didn't fail to respond to the need of financial institution. It was giving out all the necessary bail out funds just to make sure every establishment remained on the right track. I just hope that they will do the same thing with regards to lending institutions which allegedly use unfair practices. They must be investigated, especially those companies that don't abide by what is just and lawful. Countrywide Financial was one of the biggest mortgage lenders until 2008, when it nearly went belly-up. Bank of America purchased the lender, and is now liable for $335 million. Article source: <a href="https://personalmoneynetwork.com/moneyblog/2011/12/21/unfair-lending-suit/">Bank of America to pay $335 million to settle unfair lending suit</a>.</p>