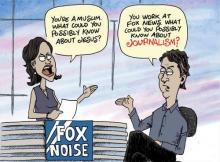 Once again, America is confronted with a lethal threat from abroad that Obama is powerless to stop. Sound familiar?

The bile is coming in "over the transom" so quickly it’s getting hard to keep up, as the conservative media signal their latest xenophobic and Islamophobic outburst, this time targeting refugees fleeing war-torn Syria.

Not interested in having a serious debate about how or when to accept mostly Muslim refugees in the wake of the Paris terrorist massacre, Fox News is sponsoring a far-right hate brigade that not only targets refugees, but President Obama, too.

It’s a bigoted bank shot for conservative commentators: Accuse Obama of mollycoddling would-be terrorists (including widows and orphans) who are viewed as encroaching on our borders. Or so goes the battle cry, which accuses the president of abdicating America’s national security - and allegedly doing so on purpose.

*Fox’s Jesse Watters: Obama is inviting in “the barbarians at the gate.”

*Fox’s Andrea Tantaros: “Everything that the president is doing seems to benefit what ISIS is doing.”

*Ben Stein: Obama’s “hatred of America” may be “because he’s part black.” “He does not wish America well.”

In other words, there’s a dark, invading force that Obama won’t stop. In fact, he seems intent on welcoming it across the border so it can wreak havoc here at home.

Indeed, watching the Fox meltdown over refugees you might think, "This is unique brand of rhetorical manure." I mean, Obama putting Muslim refugees above the safety of Americans? Opting for a “forced infiltration“? But if you hit the rewind button to October and November 2014, then you remember, "Oh yeah, they did pretty much the exact same thing twelve months ago with their full-scale meltdown over a domestic Ebola outbreak that never happened."

Is this now becoming an annual autumn tradition? Some Fox talkers are even connecting the refugee/Ebola dots, although they fail to see it as problematic. “He’s imported illegal aliens,” said Watters of Obama. “Remember he brought all of the Ebola victims into this country?”

In terms of sheer fear mongering, Fox News led the wild, right-wing pack. There was Elisabeth Hasselbeck suggesting America be put on lockdown, and her Fox & Friends co-host Steve Doocy absurdly claiming the Centres for Disease Control & Prevention was lying about Ebola because it’s “part of the administration.” (Naturally, Fox also promoted a conspiracy theorist who claimed the CDC was lying when it cautioned people not to panic.)

Andrea Tantaros fretted that people who travelled and showed symptoms of Ebola will “seek treatment from a witch doctor” instead of going to the hospital, while Rush Limbaugh implied Obama wanted Ebola to spread in America.

That last point is key to understanding the levels to which Fox talkers and their allies sink in their Obama Derangement Syndrome, both in 2014 and in 2015: The Obama administration didn’t supposedly bungle the Ebola scare because it was incompetent. It bungled Ebola because Obama wanted Americans infected.

*Laura Ingraham: Obama’s willing to expose the US military to “the Ebola virus to carry out this redistribution of the privilege’s wealth.”

*Michael Savage: Obama “wants to infect the nation with Ebola” in order “to make things fair and equitable” in the world.

*Fox’s Keith Ablow: Obama won’t protect America from Ebola because his “affinities, his affiliations are with” Africa and “not us … He’s their leader.” Ablow added, “We don’t have a president who has the American people as his primary interest.”

It’s just ugly, rancid stuff; the kind of hate speech that has rarely passed for “mainstream” conservative rhetoric in modern American politics. (For the record, the Obama administration was “vindicated” for the way it handled the Ebola scare, NBC News recently noted.)

Twelve months later we’re witnessing the same kind of toxic sewage (what else should we call it?), as Fox leads the campaign to condemn the president of the United States a terrorist-sympathiser who can’t be trusted to deal with Syrian refugees.

It’s important to note that during the media’s Ebola scare last year, lots of mainstream press outlets produced egregiously bad reporting that not only failed to illuminate the public, but it played into the fear the GOP was trying to whip up during the midterm election season. (Sen. Rand Paul: Ebola is “incredibly contagious.”)

“Here’s What Should Scare You About Ebola "read one overexcited New Republic headline, while CNN’s Ashleigh Banfield speculated that “All ISIS would need to do is send a few of its suicide killers into an Ebola-affected zone and then get them on some mass transit, somewhere where they would need to be to affect the most damage.”

To date, we haven’t seen the press regularly duplicate that kind of recklessness with the refugee story, although there have been some notable stumbles.

*Eric Boehlert, a former senior writer for Salon.com, is the author of Lapdogs: How the Press Rolled Over for Bush.