Fragile pets that can kill you are still popular 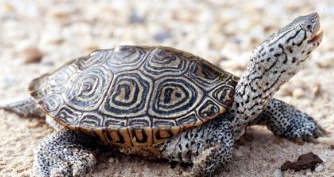 Baby terrapins may seem like the perfect pet even though they carry a bug that can kill. Some unscrupulous merchants sell these fragile creatures in their shops despite the risks to both animal and human. Pia Walter investigates.

“Ninety per cent of the baby terrapins you see in shop windows are dead within a week,” says reptile expert Simon King. “As for the lucky few which survive - well they end up in our ponds.”

According to King, owner of Kings Aquatics and Reptile World at Camden in north London, most of these youngsters die soon after they are bought from wholesale. Retail outlets rarely provide a suitable habitat to begin with, so the animals are already on their way out before they even leave the pet shop. Once sold, their new and misinformed owners further prepare them for death, as the delicate reptile is passed from one child to the next before being left to perish in a cold, inadequate fish tank.

This explains the depressing mortality rates. Young terrapins are extremely sensitive and require an extensive amount of care. Equipment alone, which ranges from thermo regulators and water filters to heat lamps and UV lights, can cost up to £700. Furthermore, their omnivorous taste in food makes it extremely difficult to provide them with the balanced diet essential to their survival.

To complicate matters further, terrapins can grow up to 20 cm (eight inches) in length, and have a lifespan of more than 30 years. “People usually buy them when they are young,” says King. “But then when their circumstances change, and the reptile keeps growing, the animal becomes an inconvenience. It’s difficult for us to see that far into the future. Most people can’t even commit to another human being – so what chance does a terrapin have?”

Jennifer Duschl’s story is a classic one of the sad terrapin trade. Last year, the King’s College medical student decided to buy two baby terrapins, which she dubbed Brutus and Nero. Today her tank is empty.

“I was told that all I needed was a 25cm (10 inch) tank and a rock for them to climb on.” she explains. “A week later, Nero was dead and Brutus outgrew his tank twice before I was forced to give him up to a turtle sanctuary. Sadly, there are many such unscrupulous vendors out there, whose profit-making craze lures them from telling their customers the truth. I feel pretty guilty about the whole situation,” admits Duschl. “If I’d known how demanding and complex they are I never would have bought them.”

Unlike Duschl’s terrapin, Brutus, most are dumped into public ponds, where they live out the rest of their miserable lives chomping on the local wildlife including species such as fish, toads, dragonfly larvae and even the occasional bird.

In 2007, Hampstead Heath’s conservation team rounded up more than 150 terrapins which were thriving in the 25 main ponds of the popular 792-acre heath, including in the men's and women's bathing pools. Thankfully, these feral omnivores cannot reproduce, due to the low water temperature at which their eggs cannot be fertilised.

Diana Scott, of the Wiltshire-based British Chelonia Group, a charity dedicated to the rescue and conservation of terrapins and other related species, says: “There is a myth among the public that dwarf terrapins exist and they just don’t. People, who are being lied to, are then left to deal with the consequences – a massive terrapin in their living room.” 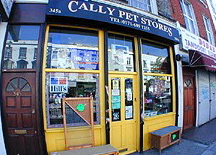 Islington pet shop owner Jim Dove does not consider terrapins to be suitable household pets, yet his outlet features a range of terrapin species that he re-stocks regularly. So, is he plagued by guilt?

“No, I blame the customers,” says the proprietor of Cally Pets shop, robustly. “I think most pet shops do sell responsibly, but customers just don’t listen. As for the terrapins which end up in ponds – well they’re the council’s responsibility really. If they wanted to, they (council officials) could clean up the ponds in no time.”

King's pet shop, on the other hand, only stocks three species of terrapin that are the musk, mudd, and map types, all of which grow to only about 10cm (four inches). For the past 10 years, King has refused to sell terrapins in his shop “as a matter of policy” he claims. What made him change his mind?

“Money”, he admits. “It was purely for business reasons. I never wanted to add to the terrapin trend and I still don’t want to be part of it.  But other pet shops generate this demand and then it’s me who ends up losing money. So I decided to supply the smallest species available. With my terrapins, there is still the problem of age, but it’s far easier to re home a 10cm terrapin than a 20cm one.”

Size and age aside, one does wonder whether any joy can be squeezed out of owning a pet terrapin. “It’s down to the individual,” says King.

Terrapins are popular among children and adolescents, who look forward to a tactile relationship with their pet. I'm told that young children enjoy exploring terrapins by putting them in their mouths, which is dangerous because of the killer salmonella bug they carry in their gut.

“The problem is that unlike other reptiles, such as lizards, snakes, and even tortoises, terrapins are not happy being handled,” declares King. “And one animal I would definitely not want in my mouth is a terrapin. So they aren’t suited for particular demographic.”

Although people who are looking for a display animal, rather than a tactile one, can still find pleasure in a terrapin provided they give it the correct environment and care.

King says: “They can make good pets. It just turns out that most people have unrealistic conceptions of terrapins and their behaviour, which is exactly where pet experts are supposed to interject and provide clarity.”

Because of the various complications which characterise the terrapin trade, plentiful voices and animal rights organisations are shouting out for it to become licensed or even banned.

Since the Pet Animals Act 1951, UK pet shops have had to operate under the license of their local council. But animal rights critics say the license is too easy to get and is not policed properly by inspectors who know anything about terrapins. Whether or not pet shop owners comply is for the council’s animal investigators to judge. Often, these barely qualified "investigators" are unable to accurately judge the conditions in which the animals are kept as they lack both the knowledge and the expertise to do so.

King has met hopeless officials. He says: “I specialise in reptiles and fish and it’s sad to say that more often than not, I get the council’s dog wardens coming in here and checking up on my store, pretending to know what they are doing. These people obviously have no idea and I am very concerned about how other stores are regulated in which the animals may not be in such pristine condition as mine are.”

Diane Scott agrees with King. She says that councils are not enforcing their licenses properly. “This approach is fast losing its credibility,” she says. “Anybody with £270 (the application fee) can get the license. Councils need to start insisting on tests to prove shop owners’ knowledge. If I want to sell porcupines, I should have to provide evidence that I know how to care for them – simple as that.”

King points out that the scheme not only harms the animal’s welfare but the toothless permit results in the public getting bad advice and being ripped off by unscrupulous pet shop owners. Critics say the problem is that very few people complain and so the situation goes from bad to worse.

“In the past three weeks alone, I’ve had four people in here who were sold the wrong or insufficient equipment. They’ve had to spend hundreds of pounds on a new setup, on top of the one they had already bought,” he adds.

Others, like Dove, disagree with terrapin or reptile licensing. “If you license one species of terrapin, you have to license them all – and if you’re in this business you obviously don’t want that. Terrapins don’t need licensing more than dogs need licensing. We have a lot more problems concerning irresponsible dog ownership than we do with chelonia,” he says.

The difference between dogs and terrapins is that terrapins are an obscure and difficult creature to keep alive and, despite their comical, likeable appearance, most people are ignorant to the demands and costs that come with owning one.

The UK’s reptile aficionados are unanimous in the opinion that the terrapin trade must be more strictly controlled. If deaths and dumping are to be stopped, councils will need to take the pet trade more seriously, making sure that their staff are better qualified. Shops will also need to begin investing in smaller species, to avoid later complications for both owner and animal.

But for now the lethal cycle of ignorance will continue to be be triggered each time a child catches a glimpse of those baby terrapins – the ones in the shop window – asking: “Mommy can I have one?”

Here's looking at you