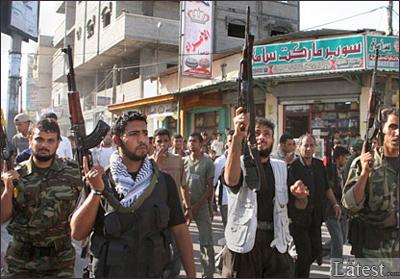 It has been a long time coming, especially for the one and a half million Palestinians of the Gaza Strip. It is also providing a welcome period of calm for the residents of the small southern Israeli towns of Siderot and Ashkelon.

But after repeatedly declaring it would never negotiate with what it describes as terrorists, what fundamental change in Israeli policy allowed it to strike an Egyptian brokered deal with Hamas for a ceasefire and a promise to gradually release the suffocating siege on the coastal territory?

In the meantime, Israel has been making positive noises with regards to a Turkish initiative for a deal with Syria, and has made separate approaches to Lebanon.

Many Middle East experts are skeptical of this apparent drive towards peace on all fronts. They say there has been no change in Tel Aviv's policy, and the Hamas ceasefire will last for only as long as it suits Israel.

Outspoken critic of Israeli foreign policy, Norman Finkelstein, believes the peace moves with Syria and Lebanon, and the ceasefire with Hamas, has less to do with the Palestinian issue than it has with dealing with Iran's perceived nuclear threat.

"I think at this point it is unclear why Israel signed onto this deal," he told PressTV's regional debate program Middle East Today.

"There are various possible motives to explain Israel's behavior. I think possibly the most sinister motive is that Israel is preparing a major attack on Gaza and is looking for a useful pretext. They will allow for a ceasefire temporarily, and at some point find the pretext to launch a major attack."

Finkelstein said he too does not see any real evidence of a fundamental change in Israeli policy.

"The main concern of Israel and the United States remains Iran, and all of their planning whether in Gaza or in Lebanon is shaped by their desire to launch an attack on Iran."

If one subscribes to the often repeated claim that Hamas and Hezbollah are little more than proxies of the Tehran government, then neutralizing Hamas to the south and Hezbollah to the north with promises of a truce, or a deal with Lebanon over the Shebaa Farms, would, in theory, protect Israel's northern and southern flanks against retaliation in the event of an attack on Iran.

A deal with Syria over the Golan Heights has the potential to drive a wedge between the close relationship between Damascus and Tehran. Denied its only close ally in the region, Iran would effectively be standing alone and potentially vulnerable.

Finkelstein said,  "I think all the developments have to be seen within the context of the US and Israeli desire to attack Iran. They probably want to convey an impression of trying to resolve the conflict with the Palestinians. They are now trying to disarm Hezbollah, by depriving Hezbollah of its excuse for carrying weapons, namely to resolve the Shebaa Farms question. Once they have neutralized Hezbollah, they will attack Iran."

Lebanon and Syria may be swayed with promises of land for peace. For Hamas, Finkelstein and other analysts believe that ultimately Israel will resort to a military solution.

"But right now, the thinking in Israel is that if it goes into Gaza it will be a very messy attack and that is possibly why they have agreed to the truce," said Finkelstein,  "One because they do not see a military option now, and two, to show the world they are doing everything they can to achieve a peaceful resolution. When they are ready to launch a major attack they will find the right pretext, break the truce and go in, in a very brutal way."

Reinforcing skepticism over Israel's true motives, Prime Minister Ehud Olmert has done little to encourage optimism. In a strongly worded speech on the eve of the ceasefire, Olmert described Hamas as  "contemptible and bloodthirsty" and said the truce is likely to be short lived.

Hardly words to encourage optimism. And with Israel already technically guilty of breaking the truce, his pessimism may just turn out to be a self fulfilling prophecy.

Further fueling concern over Israel's commitment, was an apparent violation of the truce within minutes of it coming into effect on the morning of Thursday 19 June.

An Israeli warship fired shells into the waters off Gaza City, but the action provoked no response from Hamas or Islamic Jihad fighters.

Israeli helicopters and tanks, meanwhile, are conducting highly visible patrols along the borders of the coastal strip, in what some observers say is an unnecessarily provocative show of force.

Finkelstein says Israel's grip on daily life in Gaza remains unchanged, and disputes the authenticity of Israel's withdrawal from Gaza.

"What Israel did in Gaza was to redeploy its troops to the periphery of Gaza and shut tight the prison gates."

Finkelstein said after their election in 2006 the Hamas leadership in Gaza called for and honored a ceasefire with Israel, a unilateral ceasefire.

"It was Israel's repeated targeted assassinations after Hamas had called a ceasefire which caused the breakdown," he said.

But if the truce holds, Israel will gradually lift the siege of the coastal strip, bringing relief to Gaza residents who have been the victims of what international humanitarian agencies have described as a criminal collective punishment.

However, at the time of writing Palestinians have already complained at the slow pace at which the border checkpoints are reopening for the import of essential goods, and indeed the type of products the Israelis are allowing to pass through.

If the worst fears of analysts questioned by PressTV have some basis, that is, the regional peacemaking effort is nothing more than a smokescreen to ultimately cover an attack on Iran, then it is necessarily a long process, and Israel will need to be patient.

But Finkelstein says whatever happens, the fate of the Palestinians and their aspirations for a two-state solution have already been decided.

But the obstacle, he said, is that United States and Israel have not agreed.

"Whereas the Palestinians have everything to gain from a ceasefire, the Israelis have everything to lose. Because if the ceasefire works, and Hamas shows that it is a responsible leadership and not as it was described  — a radical faction  — then Israel will have no excuse not to negotiate a settlement on the June 1967 borders. But it rejects those terms, and that is why it can never let the ceasefire work."

EYEWITNESS ACCOUNT: It's War on the streets of Mumbai