Once parliament dissolves next week, politicians will be frantically touring the country to persuade people to vote for their party.  But since most people learn about the election in the media, canvassing voters or holding rallies have limited value. Above all, political parties will be aiming to set the news agenda over the campaign, writes Stephen Cushion.

While the impact of online and social media is often the focus of attention, television news continues to be the dominant source of election information for most people. Evening news bulletins, in particular, are watched by many millions of people, including older people who are by far the most likely age group to vote.

Facebook and Twitter, by contrast, were perceived as being influential by just 7 percent and 4 percent of people respectively during the 2015 election campaign. The echo chambers of these platforms also limit how far parties can communicate their message, whereas broadcasters reach less partisan voters and have to remain impartial during the campaign.

But the impartiality of broadcast news has itself come under greater scrutiny over recent years. During the EU referendum, for example, broadcasters were criticised for being too preoccupied with balancing Leave and Remain campaigners at the expense of challenging many of their dubious claims. Meanwhile, the BBC has been under fire for its coverage of Labour leader, Jeremy Corbyn, with accusations of bias, most recently fuelled by a Nick Robinson tweet.

While some Labour MPs remain publicly critical of their leader, many of the near 500,000 members continue to be enthusiastic supporters. How will broadcasters impartially report this tension? How far should they expose divisions within the party or focus on the Labour leader’s agenda?

Unlike the 2015 election campaign, policing impartiality is now the sole responsibility of Ofcom. And one of its first decisions was to rescind the minor and major status they typically assigned to parties, which were guidelines for how much airtime parties should receive.

Without this guidance, broadcasters have far more editorial discretion about how they interpret impartiality. Will they broadly aim to stop-watch airtime to ensure a fair balance between parties? Or will news values dictate which stories and parties are covered over the campaign? In 2015 the SNP received more airtime than UKIP and, on some evening bulletins, the Liberal Democrats. But without TV leaders’ debates can the Greens, Plaid Cymru or independent candidates gain national exposure?

With Labour and Conservative viewed as neck-and-neck in the polls, the horserace narrative dominated 2015 campaign coverage. According to the head of BBC News, the prospect of a hung parliament led a “coalitionology” in election reporting.  Will opinion polls inform election coverage to the same degree as the 2015 campaign? Or will news about the policy differences between parties gain more attention? After all, unlike past elections, the

ideological differences between parties are stark, with a genuinely left-wing Labour leader battling it out with a centre-right Conservative party.

The backdrop of the campaign will also be shaped by hard and soft positions on Brexit, with Liberal Democrats unashamedly chasing Remainers while UKIP attempt to hold on to as many Leave voters as possible. Meanwhile the SNP will focus on securing an independence vote, since the UK government will not negotiate a special EU status for Scotland in a country that voted Remain.  Despite the NHS being named as the most important issue for voters, how far will Brexit dominate the news agenda and drown out domestic issues?

Newspapers also have a role in setting the tone of campaign coverage. Immediately after Theresa May announced the snap election, for example, a Daily Mail headline screamed “Crush the saboteurs” – meaning anyone opposed to Brexit should be silenced. Of course, the impartiality of broadcasters would prohibit this kind of explicit partisanship. But during the 2015 election campaign,newspapers did help set the broadcast agenda, with front page splashes prominently reported by television news bulletins.

How far will the press influence campaign coverage in 2017? Given the hostility to “Red Ed” at the last election, how vitriolic will Crobyn’s brand of left-wing politics be reported in the right-wing press? And will this help legitimatise broadcast news criticism of the Labour Leader? 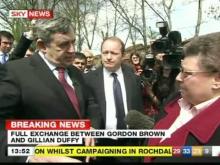 Political parties, of course, hold considerable agenda setting power in how they control campaign events. Spin doctors desperately attempt to avoid any “Gillian Duffy moments”, with highly staged walkabouts and limited campaign access. Remember a Sky News correspondent’s tweet in the 2015 campaign that revealed a Conservative rally being held in a huge barn behind closed doors? Despite being just a small crowd of Tory activists, television news did not supply the wide shot that would have exposed this staged managed event.

Will broadcasters more regularly question the party’s spin tactics in the 2017 election campaign? Could a more independent agenda be pursued, with coverage less tied to the party’s campaigning and more focussed on policy issues? And, unlike the EU referendum campaign, will more independent experts help scrutinise the pledges of parties to move reporting beyond the horserace narrative?

A team at Cardiff University will be answering these and many more questions by tracking coverage on the UK’s flagship TV bulletins – the BBC, ITV, Sky News and Channels 4 and 5 – during the election campaign. Stay tuned for updates about which parties are dominating coverage, who is setting the agenda, and how far broadcasters cover the issues voters need to know about before election day.

*Stephen Cushion is a Reader at the Cardiff School of Journalism, Media and Cultural Studies.

Vote Nana and her fellow Socialists on May 7