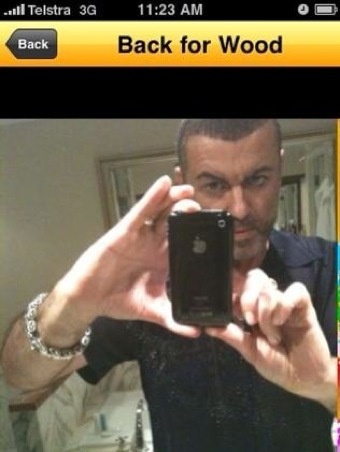 British pop star George Michael, famous for his hit songs and for getting arrested cruising for sex in a public toilet, is now on Grindr, a website that offers a location-based iPhone app for gay men to meet up via their phones.

Michael memorably said about his arrest 12 years ago in Los Angeles, US: “I got followed into the restroom and then this cop - I didn’t know it was a cop, obviously - he started playing this game, which I think is called, ‘I’ll show you mine, you show me yours, and then when you show me yours, I’m going to nick you!”

He was fined and ordered to do community service work He later parodied the incident in a video for the song Outside.

The Grindr website describes how the technology can be used: “Simply download the Grindr app to view who’s around and start chatting with a local guy. Trade your stats, show off a photo, instant message any guy you like. Share your location on a map and make plans to meet up right away. Or just browse the local scene. Grindr keeps things uncomplicated.”

On a recent vacation in Australia, it appears Michael logged on to the service under the profile "Back for Wood" and contacted several men, causing frenzy among celebrity news and gossip websites vying to be the first to report saucy anecdotes.

According to a report on Adelaide Confidential (part of the Adelaide now website) Michael used Grindr to send the message "Hi there" and a picture of himself taken in a hotel room mirror to someone he liked the look of, who happened to be just 185m away, according to Grindr GPS.

He then asked if the man was at the Hyatt, presumably the Park Hyatt Hotel near The Rocks.

The man replied that he was at nearby Circular Quay and then asked: "How you going sexy?"

A source told Adelaide Confidential: "He couldn't believe it when the picture of George popped up on his phone. They exchanged a few messages but they haven't met up yet."

Many on the internet think it’s “pretty cool” that Michael’s not only adopting new technologies, but that he’s comfortable with openly seeking liaisons despite his celebrity status.

Are you really getting the best deals at Groupon?