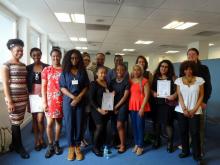 Award-winning young Black British writers gathered in central London last night to collect their prizes at the end of a closely fought contest.

More than a hundred people vied for the newly-established 2014 Young BME Columnist of the Year title after 10,000 hits on the website that publicised it.

Organiser Marc Wadsworth, editor of the-latest.com, said: "The judges were amazed by the quality of the entries and the really varied subjects tackled by the writers. It was extremely difficult for them to come to a decision based on the shortlist of 12 contestants that was drawn up. We were really heartened that young Black women were the top six winners."

In the end, Leah Cowan, aged 24, pictured left, was declared the overall winner. She collected her award from judges Dr Leah Bassel and Dr Margaret Busby OBE, at the National Union of Journalists (NUJ) headquarters. 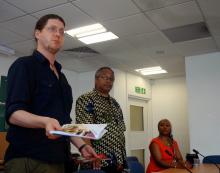 Former NUJ president Donnacha DeLong congratulated everyone who took part and encouraged them to join the union.

Other judges were Samia Rahman, deputy director of the Muslim Institute, Hugh Muir, diary editor of The Guardian and Yasir Mirza, the Guardian's head of diversity and social inclusion. CJET chair Martin Shaw generously donated half of the prize money with the multi-award winning Guardian kindly putting up the rest.

Cowan told the two dozen specially invited guests at the awards event: "I'm overwhelmed and delighted to win. Thanks so much to you and the panel of judges. The win means so much because it will enable me to have a bigger platform to expose the injustice faced, particularly by vulnerable migrant women who have committed no crime and yet are imprisoned in terrible conditions." 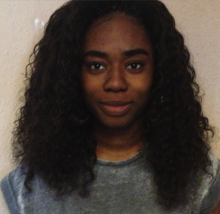 Twenty-year-old Paige Mavuala, was runner up and Justina K. Ogunseitan, a Cambridge University English literature and social anthropology student, third. Cowan received a cheque for £250, Paige got £150 and Ogunseitan £100.

The Citizen Journalism Educational Trust and the-latest.com partnered with The Guardian for the competition.

Because she is taking up a programme co-ordinator position for the School of Oriental and African Studies (SOAS) Detainees Support Group in July, the winner passed on the opportunity to be interviewed for a place on The Guardian's two week positive action scheme later this year. Runner up Mavuala, a British born journalism student at the London College of Communication of Congolese descent, was therefore able to take this up. 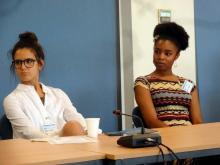 Cowan is a member of the SOAS Detainee Support Group, a student-led initiative which strives to reduce isolation through visits, to empower detainees and to lobby for an end to the use of immigration detention. She works for a small arts charity based in east London, which provides a platform for emerging musicians to showcase their work and connects them to industry professionals.

Her eye-catching report on the plight of women singled out for deportation by the British authorities and held in inhumane conditions at Yarls Wood detention centre, Bedfordshire, England, was a runaway favourite with the judges. One of the detainees interviewed by Cowan was a lesbian who faced persecution in Uganda, with its notoriously draconian anti-gay laws, if returned there. 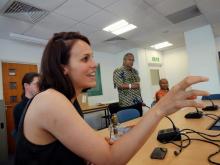 Competition judge Dr Leah Bassel, one of Britain's leading social scientists and an expert on migrants and refugees whose Media and the Riots - A call for Action report recommended that the writing competition should be held, said: "This entry is beautifully and powerfully written. Leah grabs us right away and doesn’t let us go."

The-latest will be publishing all of the shortlisted articles and a selection of others entered for the competition, so watch out for them.